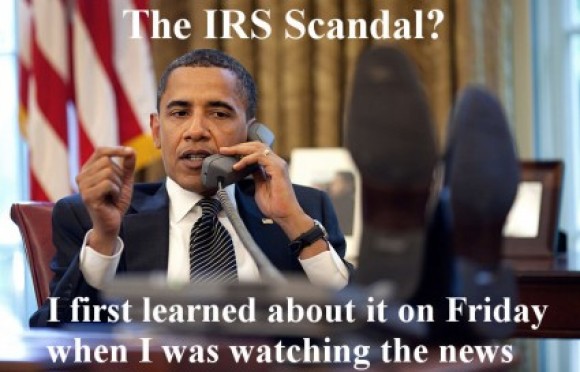 Republicans are getting tripped up by the media when challenged about evidence of President Obama’s personal involvement in the IRS scandal. Rep. Dave Camp of Michigan, who chairs the House committee looking into the IRS, “admitted there was no evidence” linking Obama to the IRS scandal, as MSNBC described his appearance on NBC’s “Meet the Press.” Camp said, “We don’t have anything to say that the President knew about it.” Michael O’Brien, a political reporter for NBC News, said both Senate GOP Leader Mitch McConnell and Rep. Dave Camp “admitted they lacked evidence that the targeting of conservatives was ordered by the White House.”

But a Democratic Administration or its president does not need to issue orders or directives or make telephone calls demanding that the IRS act against conservatives. History shows that it is simply how the federal bureaucracy operates. The “smoking gun” is liberal politics as usual, and it stretches back to the Kennedy Administration.

To illustrate this point, consider an article on a left-wing website attempting to distinguish between the Obama Administration’s IRS “affair” and Richard Nixon’s “Watergate-era IRS scandal,” The author is none other than Robert F. Kennedy Jr., who insists that what Nixon did was far worse than anything that has been done under Obama. He advised Republicans not to fall victim to “anti-Obama hysteria” and to avoid talking about Obama’s impeachment.

“A principal distinction” between the use of the IRS by the Nixon and Obama Administrations, he said in his column, “is the ingredient of direct presidential involvement.”

He does acknowledge that Nixon, who resigned from office because he was threatened with impeachment, “was aware that the IRS had audited him in 1961 and 1962 and presumed those audits were politically motivated by the Kennedy White House.” He doesn’t provide any more details, probably because he doesn’t want to implicate his father, Robert F. Kennedy Sr., and his uncle, former President John F. Kennedy, in the political use of the IRS. But that is exactly what they did. In fact, they did it before Nixon, and led Nixon to believe the practice was routine.

As noted by Victory Lasky’s book, It Didn’t Start With Watergate, the practice of using the IRS for political purposes began with the Kennedy brothers, John F. Kennedy and Robert F. Kennedy, when they were President and Attorney General, respectively. Not only were Nixon and others involved in his presidential campaign audited after John F. Kennedy won the 1960 election, “tax-exempt right-wing groups” were targeted by the Kennedy Administration’s IRS for special reviews and some lost their tax-exempt status.

Robert F. Kennedy Jr.’s article focused on a “Special Service” staff of the IRS under Nixon. What he does not talk about is a special project under President Kennedy dealing with “ideological organizations.” According to the staff report “Investigation of the Special Service Staff of the Internal Revenue Service,” prepared for the Joint Committee on Internal Taxation in 1975, “This program apparently was stimulated by a public statement of President John F. Kennedy and also a suggestion by Attorney General Robert F. Kennedy.”

In other words, initially there were no direct orders or direct presidential involvement. IRS officials simply responded to the President’s public statements and his concerns.

Here’s how it worked: President Kennedy, in November 1961, was asked at a news conference about financial contributions to right-wing organizations, and he expressed concern about “a diversion of funds which might be taxable.” He added, “I’m sure the Internal Revenue System examines that.” The Senate report says that the IRS directly responded to this statement by reviewing and auditing various organizations.

Not satisfied with the results, President Kennedy did subsequently call the IRS commissioner, telling him to move forward with an “aggressive program” against both right-wing and some left-wing groups. As Victor Lasky points out, this reflected Kennedy’s annoyance with left-wingers attacking him for his anti-Castro activities and military support for non-communist South Vietnam, under invasion from the Communist north.

The report adds that, in addition to President Kennedy’s statement, “there was interest shown in right-wing organizations by the Justice Department,” and that Mitchell Rogovin, then Assistant to the IRS Commissioner, had said he had received a telephone call from John Seigenthaler, then Special Assistant to Attorney General Robert F. Kennedy. The report goes on: “Mr. Rogovin said that Mr. Seigenthaler asked about the tax-exempt status of four or five organizations generally considered to be right-wing. Mr. Rogovin said that, in response, Mr. Seigenthaler was told whether or not these organizations were exempt and whether the organization had been audited recently.”

The key point is that the report links the so-called “first phase” of the IRS program to audit conservative groups to President Kennedy’s press conference statement. It was also linked to a “suggestion of the Attorney General” that the IRS review the tax status of certain groups.

It may be the case that Obama officials had a direct role in the IRS scandal, going beyond simple knowledge of what the IRS was doing. But it was not necessary for Obama to raise the issue personally with the IRS, as the Kennedy Administration example suggests. All he had to do was demonize the Tea Party and let his allies in and out of Congress demand IRS scrutiny of conservative groups.

In addition to using the IRS, the Kennedy Administration used the Federal Communications Commission (FCC) and the “Fairness Doctrine” to intimidate and censor conservative and Christian broadcasters. The Fairness Doctrine was abolished under President Reagan, but liberal Democrats have talked about bringing it back in legislative form. They wanted to use it to muzzle conservative commentators.

As we noted in the current scandal, the evidence appears to show that the Obama Administration and its allies used the IRS to enforce a version of the Fairness Doctrine through federal scrutiny and intimidation of religious and conservative broadcasters. For example, conservative Christian broadcaster James Dobson was told he had to be fair to President Obama to get his tax-exempt status. It is doubtful that Obama had any direct role in this. He didn’t have to get personally involved.

It is likely, however, that some White House or Justice Department officials were aware of and approved the IRS campaign. The media are already noting that the official line has been changing about which people in the White House knew what about the IRS campaign and when they knew it, and whether they informed the president.

The key point is the Tea Party movement was handicapped during a critical election year. The democratic process was undermined for political reasons in order to guarantee Obama’s re-election. House Republicans will have to decide whether they consider this an impeachable offense.