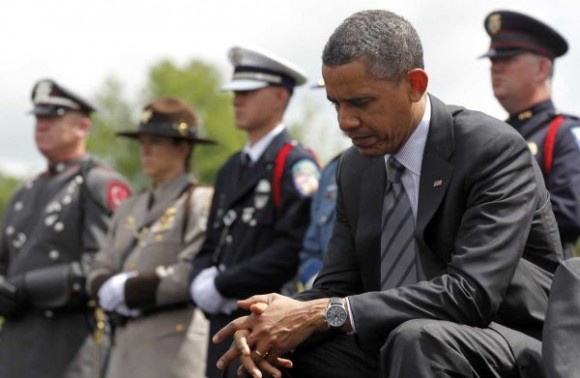 Fox News’ Jennifer Griffin called it “arguably the biggest scandal the Obama Administration is facing in Washington right now—the Department of Veterans’ Affairs disability claims backlog.” The average wait time, she reported, is 273 days. “Despite a half-a-billion dollar new computer system designed to improve efficiency at the VA, 97 percent of all the claims are still filed on paper.”

In the wake of the Memorial Day weekend, it is important to remember that 600,000 veterans’ claims have been waiting over 125 days to be cleared by the Department of Veterans Affairs. Nearly 900,000 claims were still waiting to be cleared, overall, as of April, according to The Washington Examiner. If the Bush Administration was capable of handling veterans’ benefits, why isn’t President Obama? After all, his Vice President calls this his “sacred obligation.”

“We have a lot of obligations—to our children, to the elderly, to the poor,” said Vice President Biden this past April. “But there’s only [one] truly sacred obligation in my view, and that’s to equip those we send to war and care for those who come home from war and their families.”

According to Change.gov, from back in 2009, “Obama and Biden will improve the quality of health care for veterans, rebuild the VA’s broken benefits system, and combat homelessness among veterans.” That included fixing the “benefits bureaucracy” by hiring “additional claims workers” and improving “training and accountability so that VA benefit decisions are rated fairly and consistently,” as well as transforming “the paper benefit claims process to an electronic one to reduce errors and improve timeliness” (emphasis added).

Rather than improving timeliness, veterans’ benefits backlogs have increased under Obama’s presidential leadership. The Department of Veterans Affairs’ ability to provide service-related benefits has “virtually collapsed under President Obama.” This is the contention raised by Aaron Glantz, a reporter for the Center for Investigative Reporting, back in March. “The ranks of veterans waiting more than a year for their benefits grew from 11,000 in 2009, the first year of Obama’s presidency, to 245,000 in December—an increase of more than 2,000 percent,” reported Glantz (emphasis added).

As a result, 67 U.S. senators, including 34 Democrats, sent a letter to the President asking him to resolve this situation. “In the last four years, the number of claims pending for over a year has grown by over 2000%, despite a 40% increase in the VA’s budget,” they wrote. “As a reminder, during this same time period, Congress has given VA everything it has asked for in terms of more funding and more employees; however, this has not eliminated the backlog of claims.” The budget for the VA is $140 billion for 2013, second only to the Department of Defense.

Just last week, the chairman of the House Veterans’ Affairs Committee, Jeff Miller (R-FL) and Rep. Mike Michaud (D-ME), pressed for the departments of Defense and Veterans’ Affairs to “combine their electronic health records, calling on President Barack Obama to end ‘the bureaucratic back and forth on veterans’ records,’” reported Kathleen Miller and Danielle Ivory for Bloomberg News on May 23.

“It has taken about 250 days to process a claim, according to a February memo signed by Allison Hickey, VA undersecretary for benefits, and Frederick Vollrath, a Pentagon official,” reported Miller and Ivory. “Almost 175 of those days ‘are spent trying to secure’ military service treatment records, according to the document obtained by Bloomberg.”

“The Pentagon plans to buy an electronic health-records system following increasing pressure from lawmakers to end a backlog in U.S. veterans’ disability claims.”

What you won’t hear from the mainstream media is how successful the Bush Administration was at decreasing these backlogs. VA’s internal documents “show that the average wait time for veterans filing disability claims fell by more than a third under President George W. Bush, even as more than 320,000 Iraq and Afghanistan veterans filed disability claims,” reported Glantz. “The documents show delays escalated only after Obama took office and have more than doubled since, as 455,000 more returning veterans filed their claims.” So, the number of returning veterans has increased about 30%, yet the number of delays has “more than doubled” under President Obama.

Shouldn’t this travesty be reported in its true light, then? Simply put, President Bush did a better job at ensuring that Iraq and Afghanistan veterans received their disability benefits, the data shows. “We need to hear from the President of the United States, and ever since this national controversy emerged a few weeks ago, we still have not heard from the President of the United States,” said Paul Rieckhoff, Executive Director of Iraq and Afghanistan Veterans of America, last April on MSNBC. “And the impact for our veterans on the ground is tremendous.” According to the CIR report, internal data indicate that wait times are, on average, between 316 and 327 days to process a veteran’s disability claim. “Those filing for the first time in America’s major population centers wait up to twice as long—642 days in New York, 619 days in Los Angeles and 542 days in Chicago,” wrote Glantz. Rieckhoff told MSBNC’s Morning Joe that he had spoken to those whose claims may have spanned 1,000 or 1,200 days.

Recent reporting has focused on the institutional factors that may be delaying these claims, such as the Veterans Affairs office’s reliance on paper records and the need for modernization. The Veterans Affairs Secretary is promoting a digitization method as a way to fix this problem by 2015. Yes, by 2015.

One mitigating factor that Jennifer Griffin of Fox News pointed out is that Eric Shinseki, the retired four-star general who took over as Secretary of Veterans’ Affairs in 2009, “removed obstacles for veterans to receive disability benefits for post-traumatic stress, which caused a surge in claims. The total number of post-9/11 combat vets receiving VA disability payments for PTSD soared from 27,000 to 196,000 from 2006 to 2012.”

In March, MSNBC’s Morning Joe highlighted this opinion piece by Joe Klein, who asked, “Why aren’t the claims processed according to severity?” (emphasis in original). “Why should an Army Ranger who suffered a 100% debilitating traumatic brain injury in Konar Province three years ago still be waiting for his disability check?” he asked. “Why should that Ranger have to wait behind a Vietnam veteran, who is filing a 3rd time claim to get his disability for post-traumatic stress raised from 50% to 60%?” This misses the point entirely. As the senators’ letter states, the VA has received a 40% increase in funding and greater resources. Yet the problem is growing.

“The question is, why hasn’t the VA—and the Obama Administration—made this obvious call,” wrote Klein. “The answer is: for the same reason that it’s hard to get anything done in Washington. Special interest power” (emphasis in original).

The biggest special interest in Washington is the Administration itself. The media should be asking why the Obama Administration is not able to deal more effectively with this issue. Instead, they are raising questions about efficiency—which do have their place. However, if the Bush Administration was capable of handling this issue, why isn’t Obama? And if these results had occurred under Bush, how would the media have treated them? The results under the Obama Administration have been scandalous. The question is whether the explanation for this failure is the same incompetence factor that the Administration embraces when explaining their actions in the IRS or Benghazi scandals, since the alternative is even worse.