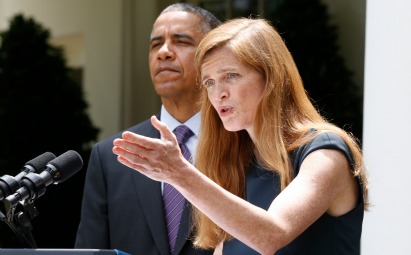 I have written on Samantha Power before and you can see our research on her here at KeyWiki.org. Power, who is married to Barack Obama’s long-time friend and ex-Regulatory Czar, Cass Sunstein, is an intense enemy to Israel as is her husband. She seeks constantly to apologize for America’s imagined transgressions and shares with Obama a desire to see America cut down to size. I want to start off by giving you a bit of insight into Power’s viewpoints.

In 2002, Harry Kreisler, Director of the Institute for International Studies at Berkeley conducted an interview with Samantha Power, asking her the following question:

“Let me give you a thought experiment here, and it is the following: without addressing the Palestine – Israel problem, let’s say you were an advisor to the President of the United States, how would you respond to current events there? Would you advise him to put a structure in place to monitor that situation, at least if one party or another [starts] looking like they might be moving toward genocide?”

“What we don’t need is some kind of early warning mechanism there, what we need is a willingness to put something on the line in helping the situation. Putting something on the line might mean alienating a domestic constituency of tremendous political and financial import; it may more crucially mean sacrificing — or investing, I think, more than sacrificing — billions of dollars, not in servicing Israel’s military, but actually investing in the new state of Palestine, in investing the billions of dollars it would probably take, also, to support what will have to be a mammoth protection force, not of the old Rwanda kind, but a meaningful military presence. Because it seems to me at this stage (and this is true of actual genocides as well, and not just major human rights abuses, which were seen there), you have to go in as if you’re serious, you have to put something on the line.

Unfortunately, imposition of a solution on unwilling parties is dreadful. It’s a terrible thing to do, it’s fundamentally undemocratic. But, sadly, we don’t just have a democracy here either, we have a liberal democracy. There are certain sets of principles that guide our policy, or that are meant to, anyway. It’s essential that some set of principles becomes the benchmark, rather than a deference to [leaders] who are fundamentally politically destined to destroy the lives of their own people. And by that I mean what Tom Freidman has called “Sharafat.” I do think in that sense, both political leaders have been dreadfully irresponsible. And, unfortunately, it does require external intervention.”

Power has made a remarkable career recovery since calling Hillary Clinton a “monster” during the 2008 presidential primaries. She resigned from the Obama campaign after that comment, but has returned to become a special assistant to the president and member of his National Security Council.

Over a long conversation with Power in December 2003, I was struck by the generational factor in her thinking. If she had experienced Vietnam in her early twenties, I felt, she would have joined the radical left, suspicious always of American power. But as an Irish internationalist witnessing death and destruction in the former Yugoslavia, she wondered how the United States could be neutral. She strongly favored the American intervention and air war that followed.

I asked whether she would have favored the Clinton administration sending combat troops to battle the Serbs, a scenario which was in the works when Russia pulled its support from Belgrade, effectively ending that war. I didn’t get an answer, only the promise of “a long conversation” in the future.

Power generalized from her Balkans experience to become an advocate of American and NATO military intervention in humanitarian crises, a position which became known as being a “humanitarian hawk.” She began to see war as an instrument for achieving her liberal, even radical, values.

“The United States must also be prepared to risk the lives of its soldiers” to stop the threat of genocide, she wrote. She condemned Western “appeasement” of dictators. She believed that “the battle to stop genocide has been repeatedly lost in the realm of domestic politics.” In her mind, domestic concerns like discrimination and unemployment are secondary to foreign policy crises, a common attitude in the national security circles she was entering.

Samantha Power is a staunch advocate of the Responsibility to Protect Doctrine and she is directly responsible for what happened in Libya. She is closely tied to George Soros and his worldviews. Obama has just named Power as the new Ambassador to the United Nations, where she will be at the helm of doing monstrous damage on a global scale.

She played a role, along with Secretary of State Hillary Clinton, U.S. Ambassador to the United Nations Susan Rice and other NSC advisers, in convincing Obama to push for a UN Security Council resolution to authorize a coalition military force to protect Libyan civilians. Other administration figures were concerned about the effectiveness of a no-fly zone and differences within NATO over what Defense Secretary Robert Gates warned would be a “big operation.” […]

Power, who sought the limelight as a writer and public intellectual, has learned to be a behind-the-scenes policymaker over the past two years, associates say.

Melanie Phillips says we should all be frightened of Samantha Power and she is right. Using the mantle of a human rights activist, Power is exactly the opposite. Claiming the moral highroad of protecting all, she will issue in breathtaking tyranny. She would happily oversee the destruction of Israel, while furthering the Caliphate and a Progressive (Marxist) planetary rule. She will institute “justice” with warfare and death. Samantha Power rides a pale horse indeed. She grovels to our enemies, promotes the slaughter of our allies and places America’s neck on the Islamic chopping block.

Rush Limbaugh said that the appointment of Samantha Power was a big “F. You” to the American people. He’s right. Obama’s mask is coming off and his totalitarian face is bearing down on us. Where is the outrage at her appointment? Has no one in America’s leadership the integrity and fortitude to speak out against this travesty? So far, just one… Ted Cruz — who might just be President one day. He’d have my vote:

Never shy about his views, Cruz bluntly questioned a series of statements Power has made, including a 2003 essay in which she called for the U.S. to institute a “doctrine of the mea culpa” to enhance credibility.

“No nation has spilled more blood or sacrificed more for the freedom of others than ours, and yet Ms. Power has publicly embraces the need for America to continue apologizing to the world for perceived transgressions, going so far as to explicitly urge ‘instituting a doctrine of the mea culpa’,” Cruz said in a written statement.

Samantha Power wields the hand that rocks a nation and the geopolitical landscape across the planet. In the name of peace, she will usher in Armageddon if allowed to. Welcome to Obama’s Coup D’etat, Gramsci style.

Rush Limbaugh: Obama Administration Is Leading a ‘Coup d’Etat’ to ‘Take Over This Country’

21 thoughts on “Samantha Power: The Hand That Rocks A Nation”