Ammo With Pork Inside – Company Boasts “Jihawg Ammo, Peaceful And Natural Deterrent To Radical Islam”
Posted on June 15, 2013 by BC 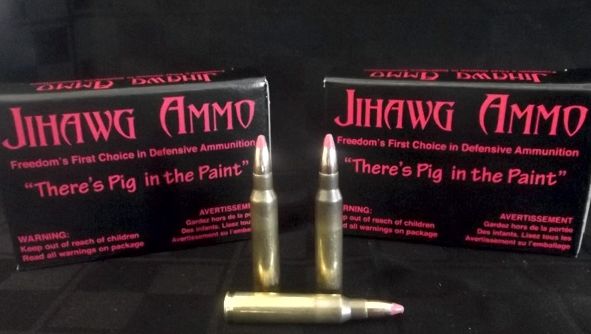 There is a new kind of ammo on the scene and it is 100% American made. It’s called Jihawg Ammo and it is meant to offer a “peaceful and natural deterrent” to the growing threat of radical Islam. It has actual pork in the ammo which makes it unclean to jihadists because of their fear of being defiled from pork, especially during Jihad.

“Jihadists fear being defiled by pork, especially during Jihad,” the company’s website says. “Jihawg ammunition is Haraam or unclean to the Jihadist. So when you hear the radical battle cry- “allahu akbar!” It’s time to put some ham in MoHAMed.”

This of course has many outraged. So what? Where is the outrage when these ass hats chop someone’s head off or blows up innocent Americans? It’s way past time to send them to their precious Allah since they want to go so bad and defile them for the journey. I found this to be not only funny, but refreshing as well. Good for this company for not bending to what is considered politically correct and the lefts irrational fear of offending anyone other than the right. I love it when strong Americans step forward and begin offending those who hate us. I might just have to support this company.

And here is the straight scoop right from the pigs (horses) mouth www.jihawg.com:

Please be advised that Conscience of a Conservative is a commercial-free blog and no products mentioned here or endorsed here have received any compensation.

One thought on “Real ammo made with Pork inside – just for you know who.”