Another day, another atrocity in our nation’s slide into the Pit of Depravity. The Pit of Depravity is a new waterpark they’re building in Arlington County. The slides look fun. We knew that whoever Obama selected for SecDef was going to be at least equally as bad as RapMaster Leon P – so today’s Blasted Fool’s report on the official celebration of ‘LGBT Pride Month”, won’t be terribly surprising – just terrible.

LGBT stands for Lesbian Gay Bi-Sexual and Tranny something or other – Allah only knows what. You were thinking of Glenn Beck’s network – thats GBTV. I’m not dyslexic, I just always get the two confused. Now stop that!!!!! I’m a GB fan – I’m just doing a riff here. What do you want? Good looks, good sense, good taste? Pick any two.

So now we have Hagel running the 5 sided building. Wasn’t he the guy who worked with his pal Karl on that Communist thingy? Or am I thinking of a second cousin of his? At any rate, we’ve come a long way baby, from ‘Don’t Ask / Don’t Tell’, to “tell everyone sweety and kiss my cute little Pink short shorts”. Oh, that’s unless you’re a dyke, in which case it’s Air Force Blue boxers. Girls will be boys and boys will be girls. Washington Times dishes the faaaaaaaaabulous details:

The U.S. military is embracing a celebration of homosexuals in the ranks this month by sending out a gay pride poster and a directive to commands, while planning a Pentagon symposium that will be attended by Defense Secretary Chuck Hagel.

Well, isn’t that special? I wonder who came up with that idea – could it be…? The Times goes on to report:

Pride month is low-key again this year. The Pentagon has handed off planning for the event to DOD Pride, an organization of gay military and civilian employees. Directives that have been issued do not say commands must hold similar celebrations. “Secretary Hagel looks forward to participating in this year’s DOD Pride event at the Pentagon on Tuesday, June 25 to celebrate LGBT Pride Month,” Pentagon spokesman George Little said. “Secretary Hagel is also looking forward to welcoming [senior White House adviser] Valerie Jarrett to the Pentagon, who will represent President Obama in delivering the keynote address at the event,” Mr. Little said.

‘Mr. Little’? I can almost guess which direction his back door swings. Maybe ‘Secretary Hagel’ would be more comfortable in meetings wearing a nice, stylish, but practical Betsy Johnson full length. Something that won’t constrict that nice, swinging gait of Chuckie’s. He might look a little less uptight than he usually does – get rid of that constipated look on his face, maybe.

Another anti-climax to this is Valerie Jarrett’s involvement. Well, she certainly knows how near and dear to Barry Obama’s heart this all is, what with Barry and Rahm’s membership in ‘Man’s Country’ back in the Windy City. Barry was a ‘man’s man’ don’t ‘ya know?

The Pentagon sent out a letter, making sure everyone is ‘behind’ this initiative. 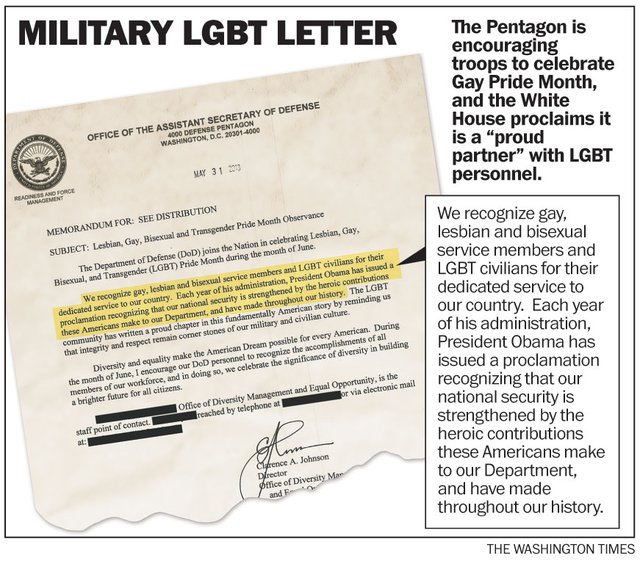 “We recognize gay, lesbian and bisexual service members and LGBT civilians for their dedicated service to our country. During the month of June, I encourage our DOD personnel to recognize the accomplishments of all members of our workforce, and in doing so, we celebrate the significance of diversity in building a brighter future for all citizens.”

I caught a typo in this letter. They accidentally misspelled the word perversity. The line should read “we celebrate the significance of perversity in building a brighter (rainbow-colored) future for all citizens. Yeah, the future’s so bright, I can’t stand to look at it without welding goggles. Well, times change. The expression “Don’t worry, I got your back”, now means you should worry – and maybe sleep with one eye open.

Pride Month? It used to be just a Pride parade which lasted several hours (too long). Then it was Pride Day, then Pride Week. Now it’s a month. These fellahs and Grrrrrls are certainly swollen with pride, I must say.

I felt like there was more afoot with this embrace of the gay agenda in the Military than meets the ‘Queer Eye’. It turns out I was correct. Evidently, the noted fashion designer Alexander McQueen (obviously no relation to Steve), before his untimely demise – was working up some spiffy new threads for the Gay Brigades – Lavender camos incorporating a utilitarian, yet stylish ‘man purse’. Nice.

One thing for sure, this ain’t your Grand-daddy’s military, unless your Grand-daddy was a sailor in the 19th Century British Navy. I’ll take the Rum and the Lash – the other one? I can’t go for that – no can do.