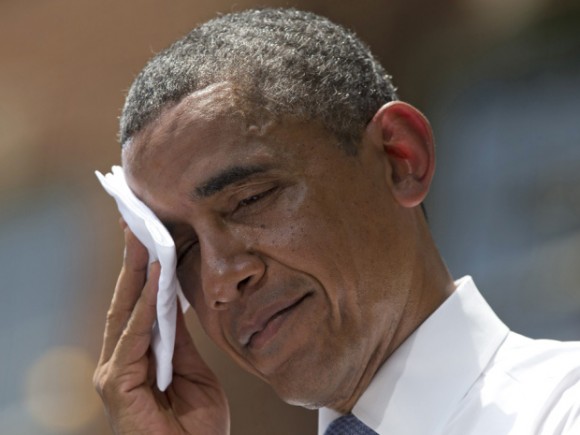 The IRS scandal refuses to disappear. Benghazi still raises questions. The press is still irate at the Administration because of its treatment of journalists who publish leaked information. This is the perfect time, apparently, for President Barack Obama to ignore the political firestorms. Instead, he moves to grab more power over the environment, and economy, by pushing for more Environmental Protection Agency regulations.

On Tuesday the President outlined a climate change agenda which will circumvent the halls of Congress and place additional authority into the hands of unelected bureaucrats. Far from criticizing such a move, the mainstream media have celebrated the Administration’s speech, and the suggested war on carbon emissions from new and existing power plants. National Public Radio calls it a “sweeping plan” and says the President is “striving to reach” an “emissions-reduction goal” he committed to in 2009 in Copenhagen.

“All of these proposals can be enacted without action on Capitol Hill,” writes Richard Harris. “That’s deliberate. Many Republicans in Congress reject the judgment of the National Academy of Sciences and other authorities who say climate change is a real concern.” In other words, Republicans are supposedly holding up the process to combat human-created global warming, and the President’s undemocratic sidestep is perfectly appropriate because progress must happen now.

Might there just be a reason that a major party in the United States opposes moving forward with climate change regulations?

Fox News even said that “Obama is expected to lay out a broad vision Tuesday, without detailed emission targets or specifics about how they will be put in place” (emphasis added).

U.S. News and World Report’s Michael Shank argued that “Obama Thinks Too Small on Climate Change.” “It is merely more of the same and most of it is safe,” writes Shank, director of foreign policy at the Friends Committee on National Legislation. 2013 is no time for a small pitch on things like power plant carbon parameters. We needed something big if America is to survive at all,” he writes.

“What the president did not do, but should have, was put a price on carbon, because it is becoming increasingly costly to our country and the world.”

However, carbon is an essential building block of our world. To label it as a pollutant is disingenuous, at best.

In addition, a carbon tax would be detrimental to our economy. “Without accounting for how the revenues from a carbon tax would be used, such a tax would have a negative effect on the economy,” concluded the Congressional Budget Office this year. “The higher prices it caused would diminish the purchasing power of people’s earnings, effectively reducing their real (inflation-adjusted) wages. … Investment would also decline, further reducing the economy’s total output.”

The President’s motivations are clear. Not only did he argue for bankrupting the coal industry in 2008, but one scientific advisor to the President recently called for a “war on coal.” “The one thing the president really needs to do now is to begin the process of shutting down the conventional coal plants,” Harvard University geochemist Daniel P. Schrag told The New York Times. (The Times has apparently scrubbed this quote from the original article, despite its being widely republished). “Politically, the White House is hesitant to say they’re having a war on coal. On the other hand, a war on coal is exactly what’s needed,” said Schrag.

“The President’s advisor calls it a ‘War on Coal,’ but it’s even more than that,” said Speaker of the House John Boehner (R-OH) in a recent statement. “These policies, rejected even by the last Democratic-controlled Congress, will shutter power plants, destroy good-paying American jobs, and raise electricity bills for families that can scarcely afford it.”

“At nearly 40 percent, coal remains the single largest source of power in the U.S., and there’s no question the EPA’s new standards will make its use more expensive,” writes Brad Wieners for Businessweek. The news organization argues that the climate plan to “ditch coal” will “be good for business. Really.” Heritage’s data show otherwise.

“Ultimately, the arguments for and against Obama’s plan come down to deciding who will choose when to get serious about the inevitable transition away from fossil fuels,” writes Wieners.

What the President has said is that he is no longer listening to the “Flat Earth Society.” “Nobody has a monopoly on what is a very hard problem, but I don’t have much patience for anyone who denies that this challenge is real,” he said at Georgetown University. “We don’t have time for a meeting of the Flat Earth Society.” This quote was widely republished by a rapt media.

“Sticking your head in the sand might make you feel safer, but it’s not going to protect you from the coming storm.”

The President also said in his speech that “The 12 warmest years in recorded history have all come in the last 15 years.” In reality, some professors argue that we’ve been in a global cooling trend since 2002. “Professor Anastasios Tsonis…published a paper last March that found the world goes through periods of warming and cooling that tend to last thirty years,” according to Climate Depot. “He says we are now in a period of cooling that could last up to fifty years.” And Professor Judith Curry at the Georgia Institute of Technology in Atlanta says that “This shift and the subsequent slight cooling trend provides a rationale for inferring a slight cooling trend over the next decade or so, rather than a flat trend from the 15 yr ‘pause.’”

Obama’s statement also ignores the fact that the mainstream media have been searching for a way to explain the temperature rise “plateau” they believe we find ourselves in. The New York Times has sought to rationalize this plateau as the result of heat being trapped in the deep ocean, although measurements of this phenomenon are “not good enough to confirm it absolutely.” More recently, the liberal New Republic tried to grapple with this problem, titling the article “Explaining the Global Warming Hiatus: Grappling with climate-change nuance in a toxic political environment.” “Since 1998, the warmest year of the twentieth century, temperatures have not kept up with computer models that seemed to project steady warming; they’re perilously close to falling beneath even the lowest projections,” writes Nate Cohn.

The problem for the New Republic writer is that “in a political environment where vast swathes of the American right reject even the premise of global warming—and where prominent right-wing pols suggest it’s an enormous fraud—this inconvenient news could easily lead to still more acrimony over the subject.” So, it’s politically inconvenient that the Earth isn’t warming as fast as projected because some might doubt the existence of global warming. “Especially since scientists themselves aren’t entirely sure what the evidence means,” writes Cohn. “If scientific models can’t project the last 15 years, what does that mean for their projections of the next 100?”

The science of climate change is not settled, and Congress remains divided on the issue because of this ongoing skepticism. “A slew of recent studies discredit the ‘planetary emergency’ narrative,” Marlo Lewis, a senior fellow at the Competitive Enterprise Institute, recently said. “For instance, sea-change over the next century probably will be measured in inches, rather than feet.”

Lewis also said that “if [President Obama] put this plan in a bill and submitted it to Congress, it would be dead on arrival.” Shouldn’t this serve as a warning as to what’s in President Obama’s plan?

The media shouldn’t praise unilateral actions by the President to address this climate issue, with the assumption that the debate is over.

Bethany Stotts is a freelance writer, and former staff writer for Accuracy in Academia. She blogs at http://bethanystotts.wordpress.com/.