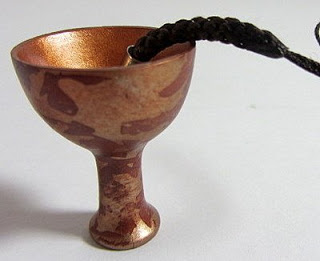 Most folks remember the scene from Indiana Jones and the Last Crusade, the ancient knight guarding the Holy Grail for centuries; but which cup was the real Holy Grail and which were imposters?

Donovan, the character representing NAZI domination, drank from an ornate golden chalice thinking he’d receive extraordinary powers reserved from On High only to find he’d taken destruction upon himself.

A strange thought to ramble through my mind as I prepare for our next Independence Day, wouldn’t you say?

I find little if anything to raise my spirits regarding America’s path, at least as they pertain to the future of our once great republic. Feelings of dread and foreboding place dark shadows on our future as I consider the path we’re now on, a path which leads toward totalitarian captivity rather than individual liberty.

In the year 1831 Alexis de Tocqueville, the famous French historian, came to our country at the request of the French government to study our penal institutions. He also made a close study of our political and social institutions. In less than ten years, de Tocqueville had become world-famous, as the result of the four-volume work that he wrote, entitled Democracy in America. Here is his own stirring explanation of the greatness of America:

But we are still free to choose our path, are we not? The ability to decide to obey the commandments of the Lord or to follow the great deceiver; isn’t that the ultimate test? We can abide by the Plan of Happiness or follow our carnal desires; after all, the natural man is and always has been at odds with God.

In the Book of Mormon we are told of a promise, a promise which applied to the early inhabitants of this land as well as in our day:

“Wherefore, this land is consecrated unto him whom he shall bring. And if it so be that they shall serve him according to the commandments which he hath given, it shall be a land of liberty unto them; wherefore, they shall never be brought down into captivity; if so, it shall be because of iniquity; for if iniquity shall abound cursed shall be the land for their sakes, but unto the righteous it shall be blessed forever.” 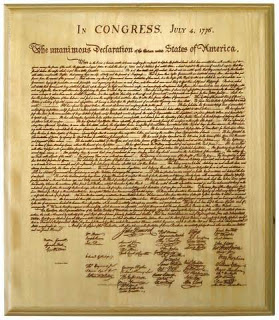 When I contemplate the course America is on, this particular scripture haunts my mind. An unsettling thought as we prepare to celebrate Independence Day and what our founding documents had to say regarding our reasons for separation.

Consider the list of acts which brought about separation from King George, those listed within the text of the Declaration of Independence, are we not making a similar list of offenses our government has inflicted upon We The People in our day, acts which would lend a reasonable person to believe his/her government is not acting in his/her best interests?

He (King George) has refused his Assent to Laws, the most wholesome and necessary for the public good.

How many Executive Orders have been used to bypass Congress in order to bring about Obama’s imposed agenda? How many Czars have been put in place, Czars who don’t require approval by the Senate? What about using the EPA or Homeland Security to impose Obama’s agenda rather than requiring Congress to pass laws intended to bring about such change?

He (King George) has forbidden his Governors to pass Laws of immediate and pressing importance, unless suspended in their operation till his Assent should be obtained; and when so suspended, he has utterly neglected to attend to them.

It wouldn’t be much of a step to compare Arizona’s attempts to enforce illegal immigration laws and have the federal government stepping in to block enforcement of those laws. The same could be said for states which passed laws requiring proper photo ID in order to vote or voter mandates regarding same sex marriage; or am I mistaken?

He (King George) has made Judges dependent on his Will alone for the tenure of their offices, and the amount and payment of their salaries. 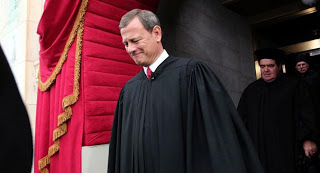 Should I mention Supreme Court Justice John Roberts may have been bullied into compliance in order to push Obamacare through? That could never happen here in America; that’s pure speculation according to the AP article.

If Texas is an example of the road America has chosen, and Texas is one of the more conservative states, then America is in deep trouble. A story by Natalie DiBlasio and Steph Solis posted on USA Today pointed to a filibuster which disrupted an attempt to scale back the war on our unborn. The proposed legislation which was thwarted would have required better management of facilities and safety measures at abortion clinics.

“Texas state Sen. Wendy Davis became an overnight social media star Tuesday as people on the Internet tuned into her all-day filibuster of an abortion bill in Austin.”

{…}
.
“Actor Henry Winkler tweeted at @WendyDavisTexas, telling her, “You stand for all of us who believe woman are in charge of their own bodies and destinies.” President Obama tweeted, “Something special is happening in Austin tonight.”…”’ (emphasis added)

Our nation is sharply divided on what constitutes a living being, an individual worthy of life, liberty and the pursuit of happiness as scrawled on a piece of parchment so many years ago. Our president stands with those in favor of late term abortions. Shouldn’t we stand up for the rights of the unborn, those who lack the ability to defend their own rights?

It’s a federal crime to destroy the egg of a Bald Eagle; but not that of a human being; doesn’t that point to a serious problem in priorities? 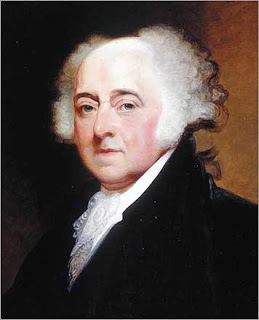 John Adams (upon moving into the White House), “I pray Heaven to bestow the best of blessings on this house and all that shall hereafter inhabit it. May none but honest and wise men ever rule under this roof.” John must be spinning in his grave watching the antics of Obama. Actually, I was looking for a completely different John Adams quote when I fell upon that last one; here’s the one that originally came to mind:

“Our Constitution was made only for a moral and religious people. It is wholly inadequate to the government of any other.”

You might want to consider how to celebrate Independence Day next Thursday as it might be our last as a constitutional republic. Thinking back to the Indiana Jones movie and the Templar Knight, what would he say about our choices? We already know the answer.

One thought on “They Chose… Poorly”