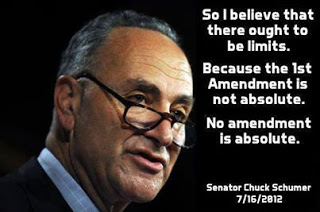 There’s a captioned picture being circulated on Facebook which got my attention. Senator Chuck Schumer’s picture with a caption saying he believes there ought to be limits on 1st Amendment rights because no amendment is absolute.

Well, how about that; this might be one of the few times I agree with Sen. Schumer.

Now before you start throwing conservative grown tomatoes in my direction and while I still have my soap box to stand on, let me explain the rational behind such a statement.

“Congress shall make no law respecting an establishment of religion, or prohibiting the free exercise thereof; or abridging the freedom of speech, or of the press; or the right of the people peaceably to assemble, and to petition the government for a redress of grievances.”

Any discussion on rights requires an acceptance that rights come from God; something which the godless among us have a problem with. There is a neutral word, a word some folks prefer, an avoidance to the use of God; Natural rights, as if they were found embedded in the rich soil of America. I’m willing to forego the argument, at least momentarily, biting my tongue and swallowing the blood; but my original supposition stands, rights come from God and this understanding is necessary to proceed further.

My friend Steve Montgomery wrote on the subject several years ago, the God: Author of liberty.

“If . . . we admit that God is the source of all wisdom and understanding, we must admit that by His direct inspiration He has taught man that law is necessary in order to govern and regulate His own immediate interest and welfare: for this reason, that law is beneficial to promote peace and happiness among men. And as before remarked, God is the source from whence proceeds all good; and if man is benefited by law, then certainly, law is good; and if law is good, then law, or the principle of it emanated from God; for God is the source of all good; consequently, then, he was the first Author of law, or the principle of it, to mankind. (Joseph Smith, HC 2:12-13.)”

There’s something satisfying about the eternal nature of God; His being the same yesterday, today and forever. Rights and their meaning don’t change over time; they remain constant. What happens is a rationalization in order to pervert the meaning of those rights, a constant attempt to mitigate and marginalize the influence of God on our society.

The purpose of the Bill of Rights wasn’t to limit individuals; but to limit government and the never ending acquisition of powers by government which eventually infringes on individual God given rights.

But…there used to be a rule of grammar, something about starting a sentence with that word; …but God did place limits or parameters on the rights He gave all men. The Ten Commandments are still in place and all rights of man must be in perfect harmony as are all the laws of the universe. At no time do any of God’s laws or commandments contradict one already in place; and as I’ve pointed out in previous writings.

“There is a law, irrevocably decreed in heaven before the foundations of this world, upon which all blessings are predicated— And when we obtain any blessing from God, it is by obedience to that law upon which it is predicated.” Doctrine and Covenants 130:20, 21

In the case of freedom of speech, it is not natural, nor would it be correct to include profanity (or similar abominations) as one of the freedoms endorsed or permitted by God and yet our Supreme Court has perverted and extended the 1st Amendment to include almost any vulgar expression as if it were the same as those intended to be protected by God.

Nine black robed men have ruled to separate and restrict religion from the process of government, as if to declare our childhood relationship with God as having been completed. We, as a nation, have no further need of Him; an interesting point of view considering God is the Author of our liberty. Some folks awkwardly explain that our rights are inherent, that they are inalienable gifts from our Creator while the very same folks will argue the term Creator as recorded in our Declaration of Independence doesn’t necessarily refer to God; their attempt to extricate religion from the equation.

“If we are then to use the word inherent within the context of any discussion of rights then it must first be expressed somewhere, “From whom are we to inherit?” Who is it that has the ability to create such characteristics and to have the power necessary to propagate characteristics? Maybe I should restructure the question; In who’s image are we created after, that we might be heirs?”

Our right to peaceably assemble to address grievances has been marginalized for several years; but according to noted legal scholar Eugene Volokh after reading the Federal Restricted Buildings and Grounds Improvement Act of 2011, that legislation has not been employed in a restrictive manner and this latest version is not much different.

“…the new law is a slight modification to the existing 18 U.S.C. § 1752. Indeed, the broadest provision in the law — the special event of national significance provision — was added to the statute in 2006. Now it may well be that the law was a bad idea even then, but it strikes me as worth noting that the law has been in place for six years, through two administrations, without (to my knowledge) a vast amount of abuse.”

I respect Volokh’s opinion on legal matters; however, the fact remains this law, as were the older versions passed under previous administrations, this law is in direct conflict with the intent of the 1st Amendment’s purpose to keep government under the power of ‘We The People’ rather than the other way around. Government has usurped powers never intended and specifically denied it regardless of whether or not these powers are ever used against individuals voicing their concerns.

An article by Andrew P. Napolitano, an acknowledged constitutional law expert, wrote in the Washington Times regarding the lengths we are distancing ourselves from the intent to protect the right to address grievances against our government and those we’ve placed in positions of power.

“Last week (article written March 15, 2012), President Obama signed into law the Federal Restricted Buildings and Grounds Improvement Act of 2011. This law permits Secret Service agents to designate any place they wish as a place where free speech, association and petition of the government are prohibited. It permits the Secret Service to make these determinations based on the content of speech.

Thus, federal agents whose work is to protect public officials and their friends may prohibit the speech and the gatherings of folks who disagree with those officials or permit the speech and the gatherings of those who would praise them, even though the First Amendment condemns content-based speech discrimination by the government. The new law also provides that anyone who gathers in a “restricted” area may be prosecuted. Because the statute does not require the government to prove intent, a person accidentally in a restricted area can be charged and prosecuted, as well.” 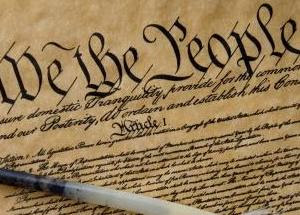 Our founders were aware of the dangers of totalitarian rule in contrast with individual God given rights, having been dealt with condescendingly by the King of England. ( Is that an understatement or what?) Their intention was to limit the powers of government by expressing those limits in writing through the Bill of Rights which was added to our Constitution. Laws written in conflict with our constitutional form of government which remains on the books, whether enforced or not, can eventually be used to chip away at our God given rights.

It only takes one tyrant to turn our nation into a totalitarian dictatorship using existing laws and we may have found such a threat to our way of life in our current administration under Obama through the help of a rubber stamp Socialistic Senate, spineless Congress and a Supreme Court that lacks resolve to uphold the Constitution.

As individuals and citizens, while we are not required to acknowledge the source of our rights, that they come from our Father in Heaven, if we obey His commandments then we are entitled to the blessings of Heaven associated with acceptable behavior in the sight of God. It is not up to government to determine or limit God’s blessings; quite to the contrary, it is up to government to abide by the restrictions we have placed upon it.

Senator Chuck Schumer got one right; not that often I agree with what he says, “No amendment is absolute”. But; make no mistake, it isn’t government’s role to place limits on individual rights. God, in His wisdom, gave us our individual agency while at the same time He placed consequences which are attached to the rights of men long before our founders figured out a way to put those rights down in black and white. 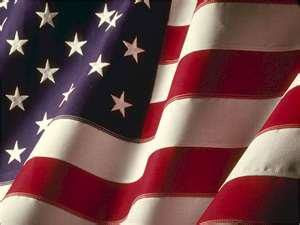 As you prepare to celebrate this Independence Day please remember the awesome individual responsibilities which are linked directly with your rights, your God given rights. John Adams said the same basically the same thing.

“Our Constitution was made only for a moral and religious people. It is wholly inadequate to the government of any other.”

2 thoughts on “1st Amendment does have limits”