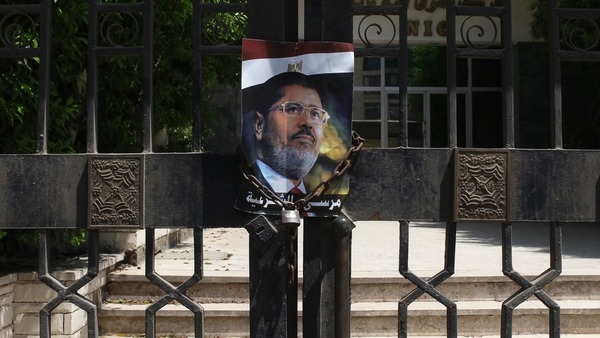 As the country rejoices, Egyptians fear jihad will turn into civil war. The military removed and jailed President Morsi on the demands of the people, and now Morsi’s angry remnant – defenders of the dishonored, ousted Muslim Brotherhood — roam the streets in bloodthirsty revenge. Instigated by President Morsi’s June 26th and 28th speeches, the Muslim Brotherhood and their sympathizers terrorize Egyptian neighborhoods. All who are happy to have Morsi gone – ordinary citizens and Egyptian military — becomes their enemy.
Where does the United States stand on this battleground?

Now, after Morsi, Egypt’s military plays the role of transitional authority and guardian without taking power. The army has not seized power from the government or sought violence. The military has not grabbed positions, control, or command as a consequence of the people’s rebellion. Instead, it continues to support Egypt’s revolutionary democratic movement and keep law and order after removing the President. The army is facilitating the appropriate legal course and changeover in the government according to guidelines provided in Egypt’s previous constitution — correctly “freezing” Morsi’s Sharia law constitution rejected by the majority. 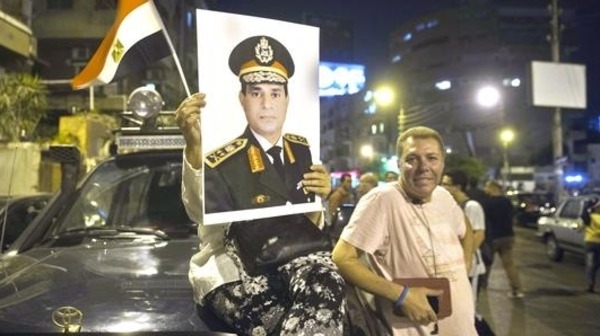 Egypt’s military performed dutifully toward its countrymen resolving the June 30th issue with perfect timing as it rejected the bait of “dialogue.” This resulted in a miraculous turnover for Egypt. Unlike SCAF’s dirty compromises after the overthrow of Mubarak, this army is supervising the transference of power from Morsi’s regime to the president of the High Constitutional Court, Adly Monsour, who is now the interim President of Egypt. In siding responsibly with freedom fighters Egypt’s army has forgone political empowerment.

This is the stunning part; the part that the media around the world seems to be missing.
Claiming Egypt’s military action as a military coup is dangerous for this plays into the hands of the radical views of a vindictive and deceptive Muslim Brotherhood now threatening warfare on Egypt. It is as wrong as the “Arab Spring” label before it. Some in the media even suggest that the July 3rd removal of the terror-backed, Shariah law advocate overreaching his executive powers to build a parallel Saudi-like brown squad and much worse, defies democratic principles. Even if this were true, Egypt must first clean house of democracy’s enemies in order to begin its democratic process. Innocent Egyptians are at risk if, based upon such views, the U.S. halts aid (the $1.3 billion commitment) to an Egyptian military aligned with freedom-fighters.

Why did the army act as a trustworthy steward of the people’s non-violent Tamarud (Rebel) movement, intervening and demanding Morsi comply with their petition request? It is difficult to say. There is no indication that the military, which just played the role of mediator and protector of the people, will turn the tables in a power grab nor is there evidence to the contrary. More importantly, the army remains unified against the Muslim Brotherhood. Egypt’s sequel depends on one figure, Commander-in-chief Abdel Fattah El Sisi.

While in office, Commander-in-chief Morsi moved around army officers like chess pieces securing in part loyalty to his regime in many areas as in the replacement of Mohammad Tantawi, head commander of Egyptian Armed Forces, with Abdel Fattah El Sisi on 12 August 2012. Given more time to complete his gradual plan, Morsi was to make a total overturn of military leadership to Muslim Brotherhood loyalists, including El Sisi, who was former head of military intelligence under Mubarak. Now it is El Sisi who put the army at odds with Morsi. He responded to the country’s unrest as the Tamarud petition grew with millions of signatures, making multiple requests for all political interests in Egypt to come together for talks – including freedom-fighters, Muslim Brotherhood, and Morsi. Morsi refused and no talks occurred.

Referring to the Muslim Brotherhood-backed Morsi regime, El Sisi made known his loyalties before June 30th protests when he said, “When we see that Egyptians are under threat and we are not able to defend them, it is better we die.” Finally, on behalf of Egyptians, El Sisi delivered a 48-hour notice to Morsi to leave office, which Morsi rejected. After handcuffing the President on July 3rd, the army naturally began to arrest and jail Brotherhood figures and to dismantle their power structure out of fear that certain leaders would instigate violence. This included the arrest of Khairat el-Shaiter, Vice Morshed (vice-spiritual guide) of the Muslim Brotherhood, who was declared ineligible for a 2012 presidential bid because he escaped a seven year prison sentence for money laundering to the banned Muslim Brotherhood.

Confiscating classified documents from el-Shaiter’s villa residence upon his arrest, the military received information damaging to America’s pro-democracy position. The army claims these files show the U.S. gave more than $8 billion to Egypt’s Muslim Brotherhood upon el-Shaiter’s White House visit in April of 2012. Now the central focus of the Egyptian army in its battle against the Muslim Brotherhood is on the U.S. administration.

Upon Morsi’s removal, the U.S. ran to Morsi’s defense by threatening the Egyptian army with cutting off U.S. aid. Unfazed, an army spokesman responded with a statement pertaining to the army’s plans to publicly unveil the contents of the incriminating documents. The Egyptian military intends to embarrass the U.S. using Egyptian TV and the international media to air court hearings concerning these documents which link U.S. interests to the rise and support of the Muslim Brotherhood.

Other hidden documents discovered by the army in Brotherhood Al Fayyum offices reveal that Morsi received fewer votes in the 2012 Presidential election than his opponent, Shafiq. Suspicion of U.S. involvement in this matter runs high among Egyptians. It has from the day Morsi was announced President. Back then the U.S. administration was silent on the issue of Egypt’s election fraud.
The U.S. also overlooked the mysterious delay in the announcement of Morsi’s win (some say America was behind it) and, without comment, accepted a reversal of opinion from the electoral judge on the issue of unopened voting polls in Coptic neighborhoods where the judge pointedly condemned it and then suddenly dismissed it as irrelevant. How is it that these items were excluded from the efforts of the Obama administration to “broaden engagement” in the Egyptian post-revolutionary scene.

The tacit U.S. of recent past is now vocal. The Obama administration asserts its influence by requesting Morsi’s return. Before June 30th, U.S. concerns tried to suppress pro-democracy freedom forces particularly through private meetings initiated by the U.S. ambassador. The U.S. now questions Egyptian protocol regarding its military. We should be doubly outraged toward America and German-led Europe in calling for the reinstatement of Morsi to lead Egyptians — who neither voted in fair elections to have him nor want him after a one-year term of anti-democratic maneuvers – for that calling of a reversal of freedom’s magnanimous feat demonstrates America’s allegiance to the lies of the Muslim Brotherhood.

Thankfully, the army looks to avoid bloodshed by keeping Morsi under house arrest protected from a disenchanted Muslim Brotherhood ready to assassinate him and spark mayhem – legitimizing violence to hold on to power. So far, the military’s power is the power of the people. We do not see a military coup in Egypt, but an Egyptian army honoring the sea of waving red cards stating “get out” – the only “weapon” wielded by freedom protesters to rid a deplorable ruler. In a soccer match, a referee pushes the red card into the face of a foul player in the field to signal him unacceptable and too dangerous to remain in the game. Now Mohammad Morsi is out of the game. He must stay that way for good.