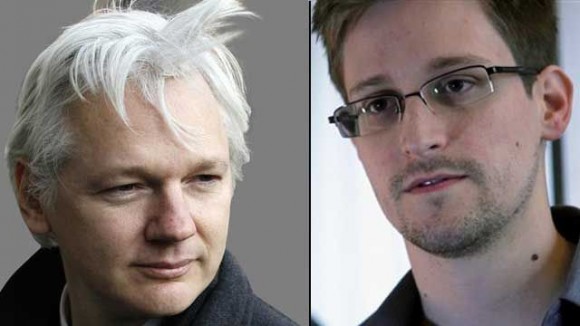 With his official request for political asylum in Russia, NSA leaker Edward Snowden’s true colors are out in the open for anyone to see. Those who proclaimed Snowden a “whistleblower,” rather than an enemy of America, have to explain themselves and take into account the significance of his plea to Vladimir Putin, the former KGB officer running Russia.

One of the most influential websites associated with the late Andrew Breitbart had been in Snowden’s camp but is now turning around, having seen the evidence developed by Accuracy in Media, and others, of how Snowden has deliberately played into the hands of forces hostile to the United States.

The real motive behind the Snowden disclosures, writes Lee Stranahan at Breitbart’s Big Journalism site, is to “attack the military via the NSA and criticize America’s attempts to defend itself from terrorism…” This is a welcome insight into the nature of the anti-NSA campaign, which has actually been underway for many years and comes before the Republican House of Representatives on Wednesday when Kate Martin of the far-left Center for National Security Studies is scheduled to testify before the Judiciary Committee.

In the House, Tea Party Republican Rep. Justin Amash (R-MI) has joined with veteran leftist Rep. John Conyers (D-MI) to introduce a bill to undermine the surveillance powers of the NSA. In the other body, Senator Rand Paul (R-KY) has refused to condemn Snowden as a traitor and is working with the ACLU to restrict the authority of the NSA.

The Snowden statement outlining his need for help from Russia was distributed by WikiLeaks, the group that seems to have replaced Glenn Greenwald of the Guardian as the handler for the former NSA contractor. WikiLeaks founder Julian Assange was a fixture on Moscow-funded RT television, formerly known as Russia Today, before seeking asylum in the London embassy of Marxist Ecuador, in order to avoid facing sex-crimes charges in Sweden and possible espionage charges in the U.S.

Stranahan understands the significance of this as well, saying, “The Snowden story has been used to promote the Assange ‘postmodern surveillance dystopia’ fear-mongering, which is exactly why Snowden has been getting support from WikiLeaks as he tries to escape justice. It’s a worldview meant to induce fear and induce countries like the U.S. to drop their defenses.”

In short, the anti-NSA campaign appeals to the paranoid belief, especially among far-left liberals and extreme libertarians, that the government is searching through telephone calls and emails for no legitimate reason.

Before Stranahan’s excellent post about the case, John Nolte of Breitbart had been a vigorous defender of Glenn Greenwald and his stories about Snowden. “Kudos to Greenwald,” he wrote early on as Snowden began, with Greenwald’s help, his campaign of disclosing classified details about the NSA’s terrorist surveillance programs. “Hopefully, our lazy, corrupt, lapdog media that have thus far failed to break even a single one of these Obama scandals, will back Greenwald and maybe even flex their own atrophied investigative skills…”

Of course, the NSA story was not an “Obama scandal,” since the NSA’s programs were started under Bush and have received the bipartisan support of Congress. The head of the NSA, General Keith Alexander, has been in the job since 2005—three years before Obama was elected president. The NSA’s main supporter in Congress is Democratic Senator Dianne Feinstein (CA), chairman of the Senate Intelligence Committee, but Democrats and Republicans have pointed out that the NSA operates under layers of oversight by Congress and the courts.

Nolte attacked as “baseless” the claim that Greenwald had “done something illegal” in his work with Snowden, when in fact Greenwald had clearly violated the law against publishing communications intelligence information.

Jeremy Segal of Big Journalism has since commented on Greenwald’s attendance at Marxist conferences, a fact we brought to the attention of the media. But the story is much bigger than that.

The far-left, including groups like the Center for National Security Studies (CNSS), began their campaigns against intelligence-gathering by the U.S. Government in the 1970s. Their targets then were the CIA and FBI. “Founded in 1974 to prevent violations of civil liberties in the United States and work for control of the FBI and CIA, the Center has a long record of success,’ its website says. In a perverse way, this is true, as the FBI and CIA were hamstrung in their ability to monitor traitors, spies and terrorists. The 9/11 terrorist attacks were one of the results.

The choice of the NSA as a follow-up target is not unexpected since the agency got new powers after 9/11. “In 2006 CNSS Outlined the Beginning of the NSA Scandal,” the group notes on its website. The “scandal,” from the point of view of CNSS, ACLU and similar groups, is that the U.S. Government would seek to prevent terrorist attacks on American soil by monitoring enemy agents running around America plotting to kill us.

The CNSS, which is testifying against the NSA at the House Judiciary Committee hearing on Wednesday, has a fascinating history. Director Kate Martin replaced Morton H. Halperin, a long-time ACLU operative who went to work for George Soros. As far back as 2006, when The New York Times disclosed one of the NSA’s secret counter-terrorism programs, Halperin, then Director of U.S. Advocacy at the Open Society Institute (OSI) and Executive Director of the Open Society Policy Center, authored a major paper for OSI attacking the program.

Halperin was a curious but revealing choice to run two of the most important Soros-funded operations. His telephones were tapped when he served under Henry Kissinger in the Nixon Administration because he was suspected to be a leaker of classified information. Francis J. McNamara, former research analyst and consultant to the House Committee on Un-American Activities, testified against his nomination as Assistant Secretary of Defense for Democracy and Peacekeeping in 1993 and said that he had “a sick, unhealthy animus and hostility toward the U.S. Intelligence Community and the individual agencies composing it, despite their vital relationship to the security of the nation.”

The former director of the ACLU’s Project on Political Surveillance, Frank Donner, worked with the CNSS against the intelligence-gathering capabilities of the U.S. Government. He had a lot to hide, since he was a member of the Communist Party USA (CPUSA) who traveled to Russia and had contacts with Russian espionage agents, according to his FBI file. He wrote several books attacking U.S. intelligence agencies, including the NSA. He especially hated the House Committee on Un-American Activities, which grilled him on his CPUSA activities. He took the Fifth. But Donner had the last laugh, as the committee and its successor, the House Committee on Internal Security, were abolished in the 1970s.

Donner, who died in 1993, worked for Aryeh Neier at the ACLU before Neier went to work for George Soros as director of his Open Society Institute from 1993-2012. Neier was part of the effort to dismantle New York City’s “Red Squad,” a police unit charged with monitoring subversive and communist groups. Similar units were abolished in other cities.

These individuals were under FBI surveillance for very good reasons and the subject of extensive files about their activities and associates. The CPUSA also supplied agents for several Soviet spy rings that were operating throughout the U.S. Government. We learned in 1995 about something called Venona, a project that had decoded telegrams between Soviet spies in the U.S. and their superiors in Moscow. The evidence showed that about 350 Americans, some in key positions in government, conspired with or spied for the Soviet Union during and after World War II.

This Venona project, interestingly enough, was conducted by the NSA, which helps explain why the agency has always been a target of the far-left. It has been a critical intelligence agency, able and willing to “connect the dots” between enemies of the United States and their agents on U.S. soil.