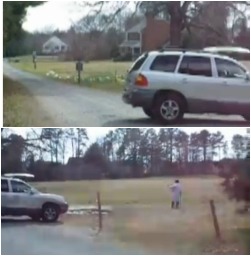 Henrico County VA, July 16 2013 – Described by eyewitness as “Islamic Center of Richmond attendees leaving the ICR property by means of private Hoehns driveway appeared that they were trying to force a Hoehns Lakeview Farm resident’s vehicle into the oncoming traffic of Hungary Road”, this event – one of many hostile activities reported by surrounding community residents to local law enforcement – initiated by ICR’s land agent Yunus Vohra and his colleagues resulted in a formal charge of disorderly conduct. (example in photo of parking jihad)

“I continue to be concerned about the role the DOJ (Department of Justice) played in muscling this through local officials. You (addressing local residents) are clearly right on principle. But this is not about principle. It is about the exercise of raw political power.

Typically, the only thing which holds us back is the fear of being called bigots by those who are wrong. We – all – benefit from a full public examination of what they (ICR) are doing and why they are doing it.”

Disturbed by queries from residents of his district, Majority Leader for the Congress of the USA Eric Cantor solicited DOJ’s opinion. As a result, Thomas E. Perez Assistant Attorney General respond,

“complaints related to this site appear to be the result of a failure to be respectful of the property rights of nearby property owners and the surrounding community’s expectation of public safety and welfare.

While Henrico County is operating under a consent decree issued by the United District Court for the Eastern District of Virginia related to a dispute to rezone property to build a mosque on Impala Drive, the Hungary Road site’s issues fall outside of this purview. Enforcement of the Religious Land Use and Institutionalized Persons Act (RLUIPA) should not interfere with the County’s standard regulations and procedures.”

Since public safety and welfare issues which were documented during a County Plan of Development hearing remain unresolved, area residents filed a community appeal. Although they only requested “approval for not simply a ‘place of worship’ but a SAFE place of worship for all whom frequent as well as reside in our community”, community pleas for adequate support parking and/or agreement to scale down ‘intensity of use’ to balance available vehicle parking; and amenities such as fencing and/or landscaping that will shield adjacent properties from lights/noise and/or enable adjacent property privacy rights – were again denied.

It was during this appeal hearing that Khader Allahbaksh, a member of the ICR Board, referred to his Indian heritage (pdf) and remarked “ICR will sweeten the Henrico community and strive to provide a safe environment“. Yet, more than a year after formal hearings, community residents do not find Allahbaksh’s prediction their reality.

Instead, their community is plagued by ICR members who choose to participate in activities which block residential homes from access to public services such as emergency, interfere with the safe use of the community’s school bus stop, result in actual as well as ‘near miss’ vehicle accidents, result in reckless endangerment to others; and specifically, entice others to trespass into private residential areas.

When confronted concerning these issues, ICR leadership committee member Assadullah Kahn denied ICR’s involvement. Their land agent Yunus Vohra not only chose to deny but issued an email to Henrico County appointed and elected representatives, staff and area residents in which he called those who confront him and his colleagues, liars.

“The Islamic Center of Richmond was approved for development of a 30,277 square foot building on the old Stone’s Nursery property on a 5.2 acre lot, on a very busy Hungary Road amidst surrounding quite neighborhoods. The Henrico Planning Commission and Board of Supervisors have unexplainable shown a ‘blind eye’ to concerns from the community over traffic safety, noise, and aesthetic appearance of the huge proposed ICR structure.

While as a community, we have rally as many voices as possible in an attempt to get Henrico County and ICR to slow down and look at our concerns more closely. This has not been an attempt to stop the Mosque, but to bring common sense into a situation that appears unreasonable for the area and its surroundings. We base our concerns on Mosque style events which are presently held in the site’s existing limited-use structures.”

Construction plans for the ICR Hungary Road Mosque have been resubmitted for County approval. Proposing to construct a phase I, approximately 10,000 of the overall 30,000 square foot structure, these plans are undergoing agency review and available for public review and input. Those interested, are advised to contact Kevin D. Wilhite, AICP project manager for Henrico County Planning Department at 804-501-4989.

Sylvia Hoehns Wright, a spokesperson for her community Hoehns Lakeview Farms, agrees with the neighborhood assessment of this situation urging all to contact their legislative reps to ensure a SAFE community for those who dwell as well as travel through this area.

One thought on “Virginia Henrico Mosque, A Recipe for Disaster”