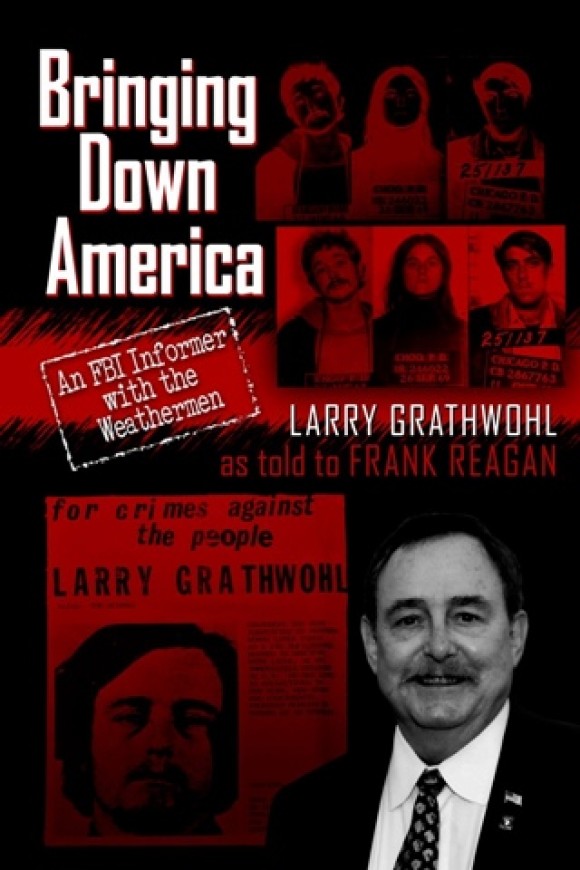 Larry Grathwohl may be best known as the FBI informant in the Weather Underground who disclosed that Bill Ayers and Bernardine Dohrn, and their Weather Underground criminal gang, had plans to eliminate as many as 25 million Americans if they came to power.

Unexpectedly, Larry, a good friend for many years, passed away last week. The Weather Underground had put out a “wanted” poster on Larry decades ago, after his cover was blown and he surfaced. They called him an “enemy of the people.”

Larry traveled around the country, confronting Ayers and his comrades, including Mark Rudd. He didn’t fear for his life, but he was always on guard. He had been speaking out concerning Robert Redford’s movie glorifying the Weather Underground, “The Company You Keep,” and had noted Redford’s sympathy for Fidel Castro. Redford sold out to George Soros several years ago.

Although Larry had some health problems, his death at this particular time is, frankly, a mystery to me. I have questions that need answers.

Since Obama first ran for the presidency, attempting to cover up the nature of his relationship with the Weather Underground, Larry had been trying to tell the truth to the media. He and I worked together for five years on a Project for Justice for Victims of Weather Underground Terrorism. Larry had been working with current and former law enforcement to open and continue investigations—and perhaps convene a grand jury—to hold members of the Weather Underground responsible for the suffering and death which resulted from their bombing campaigns across the United States. Most of their venom was directed against local police, but American soldiers and the FBI were also targets.

Members of an associated group, the May 19th Communist Organization, are still on the loose. Obama may have been a member of the group during his time at Columbia University in the early 1980s. The FBI does not seem to have made much headway under Obama in finding these fugitives, but it did put black terrorist Joanne Chesimard on its “Most Wanted Terrorists” list. We noted that the search for Chesimard, hiding in Cuba, could begin by wiretapping President Obama’s friends, Bill Ayers and Bernardine Dohrn, and other members of the Weather Underground. The Weather Underground helped Chesimard—a convicted cop-killer—escape from a New Jersey prison in 1979 and flee to Cuba.

Weather Underground members traveled to Cuba and even the old Soviet Union for advice and training.

Larry had come back from the Vietnam War only to find that he had to do battle with communists in the United States. He helped the Cincinnati police and the FBI do just that. He had evidence, presented to a grand jury and the U.S. Senate, that Ayers and Dohrn were involved in the 1970 bombing murder of San Francisco Police Sergeant Brian V. McDonnell. McDonnell suffered two days in the hospital before dying from a bomb packed with heavy metal staples. One staple went through his eye.

The communist terrorism that Larry saw in Vietnam had come to America. He had been accepted by the Weather Underground because they perceived him to be a disgruntled serviceman angry over the course of U.S. imperialism in Vietnam.

But Larry never gave up on America and, in fact, risked his life to protect it. A true patriot, he had joined the Army in 1964, wanting to go to jump school and be assigned to the 101st Airborne Division. He got his wish, was assigned to the 2/502 Infantry and sent to Vietnam in July of 1965. After completing his tour he was assigned to Ft. Knox, Kentucky, and became a drill instructor. Later, he worked in various private sector jobs.

Larry fought in what President Reagan called an honorable and noble cause. But a liberal Congress cut off funding for the effort to keep Vietnam free of communism, and the country fell to the Communists. To the dismay of Larry Grathwohl, he saw that the United States was falling to the communists as well.

Ironically, the re-education camps that the Weather Underground had predicted for a communist America were becoming a reality, in the form of colleges and universities, where Ayers and Dohrn both had gotten jobs. They moved from terrorism to “education.”

It wasn’t just the failure to bring Ayers and Dohrn to justice for their terrorism that kept Larry going. It was the inability or unwillingness of the media to understand the threat to America that these criminals and their communist ideology represented. One of the biggest myths was that the Weather Underground was anti-war.

It is worth taking a look at America’s defeat in Vietnam, in order to understand Larry’s motivations as a freedom fighter. He witnessed communist terrorism firsthand.

The distinguished German journalist, Uwe Siemon-Netto, a former Vietnam correspondent, has written a new book, Du’c: A reporter’s love for the wounded people of Vietnam, which examines this tragedy for Vietnam, America, and the world.

“The Vietnam war was the first one in history that was won by one side essentially via the media of the other side,” he told an Accuracy in Media conference in 1979. The death toll was 58,272 American, 4,407 South Korean, 487 Australian, 351 Thai and 37 New Zealand soldiers.

This communist “war of liberation,” as Ayers and Dohrn called it, brought no liberation.

One of Larry’s most powerful insights into the nature of the enemy came in his report, “White Reds Exploiting Blacks: The Weather Underground, Barack Obama, and the Fundamental Transformation of the United States.”

He said, “After I left the Weather Underground and testified against Ayers and Dohrn for their involvement in a murder plot that killed Police Sergeant Brian V. McDonnell, they surfaced in Chicago helping Obama launch his political career. Like true communists, who have been manipulating black Americans since shortly after the Russian revolution, Ayers and Dohrn would have seen revolutionary potential in Obama. He was, in the words of Communist operative Frank Chapman, a ‘revolutionary mole.’ Perhaps that term was meant to be more than a figure of speech.”

Larry’s report, which should be read in its entirety, includes many insights into what we are facing in today’s political environment.

Writing about his experiences in the Weather Underground, Larry said, “I remember one meeting when our Weatherman ‘collective’ brought up the subject of the Kennedy assassinations. At least 20 to 25 people were present and Bill Ayers was one of them. I heard Bill state that the murders of both John F. Kennedy and Robert F Kennedy were a good thing because liberals compromise the conflict between U.S. imperialism and the socialist revolution. Liberals prevent the contradictions from becoming obvious and thus prevent a revolution. Therefore, the assassinations of the Kennedys were to be welcomed as a necessary advance on the road to communist world revolution.”

Larry added, “I look back on those comments by Bill on the Kennedy murders and it helps me understand certain things about the communist conspiracy that continues to target the United States. Blacks can be used for the revolution, but they can be sacrificed as part of the revolution as well. Indeed, like the Muslims, they are cannon fodder for the revolution.”

He went on, “One of my assignments was Detroit, Michigan, and I arrived there in late January of 1970. Shortly after my arrival I was assigned to a cell with four other people and during the meeting with Bill Ayers we were told that our objective would be to place bombs at the Detroit Police Officers Association (DPOA Building) and at the 13th precinct. Furthermore Bill instructed us to determine the best time to place these explosive devices that would result in the greatest number of deaths and injuries. He also directed that the bombs should be set to go off at the same time.

“While we were gathering information regarding these two targets I noted that the DPOA building was a converted single-family brownstone that had been built prior to World War II. A walkway along the side of the building went from the main street to an alley in the back. Next to the DPOA building there was a Red Barn restaurant which was a new structure designed as a fast food outlet. This location was in a predominantly black neighborhood which meant that most of the customers in this Red Barn restaurant were black. After a week of information gathering we had another meeting with Bill Ayers and at this time I suggested to Bill that if we placed the bomb in the walkway between these two buildings the DPOA building would suffer little if any damage while the Red Barn restaurant would most likely be destroyed. I also concluded that customers in that restaurant would die.

“Bill Ayers responded by telling me, ‘sometimes innocent people have to die in a revolution.’ I was shocked. I couldn’t believe that a person who had so eloquently spoke of the black liberation movement could be so callous when it was obvious that the resulting explosion would kill many of the people he claimed to be so concerned about.”

We see a variation of this attitude in the exploitation of the black community by Barack Obama, Al Sharpton, Jesse Jackson, and so forth. Blacks are being sacrificed in the name of the revolution. Ayers and Dohrn must be proud.

The death of Trayvon Martin, a teenager heavily into drugs and violence, is being used to indict not just “white America” but America itself.

Not content to exploit the Martin death, Obama’s Organizing for Action (OFA) has just announced “Action August” to press Obama’s agenda on a wide variety of issues in the months ahead.

While the Tea Party and the 9/12 groups are in disarray from IRS targeting, the OFA’s 3.1 million supporters are making calls and training new organizers. It is non-stop community organizing.

Larry had spent some of the final weeks of his life in Florida working with Tina Trent and speaking to Tea Party groups. He had just released an updated version of his 1976 book about the Weather Underground, Bringing Down America.

Tina writes, “Larry was a sweet and decent and very wise man. He risked his life to protect us from murderous adolescent Marxists like Bill Ayers and Bernardine Dohrn. Doubtlessly there would be family members of police and soldiers who would be without their loved ones tonight if Larry had not infiltrated the Weather Underground and exposed their crimes.”

Brandon Darby of Breitbart says, “Those of us who have served in an undercover capacity with the FBI have lost a tremendous friend and a valuable resource.”

It would be a fitting tribute to Larry’s life to purchase his book. It will help you understand the situation we are in from someone who really was in the trenches.