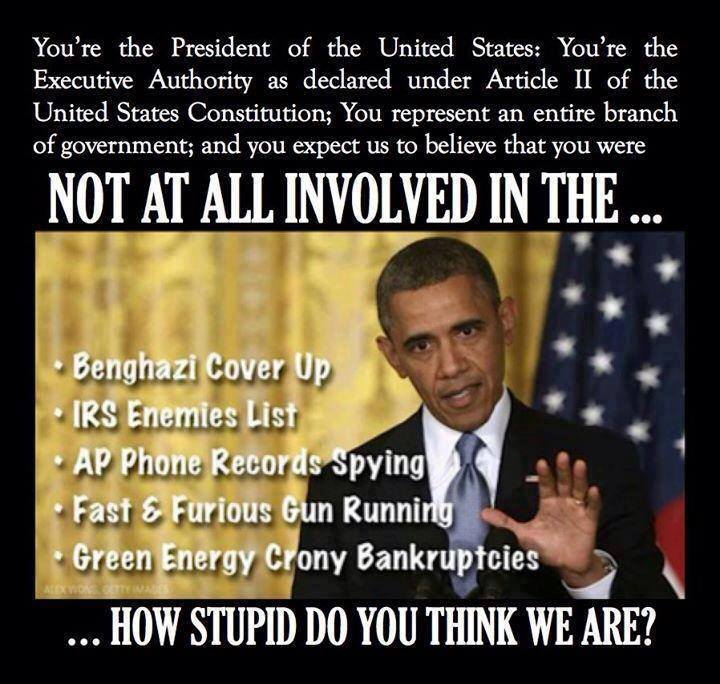 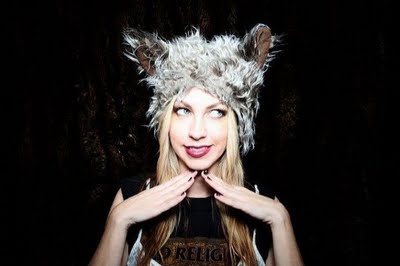 I hope she wears the famous lamb’s head hat to our do. The actual day is Sunday, but any excuse for a party, no? 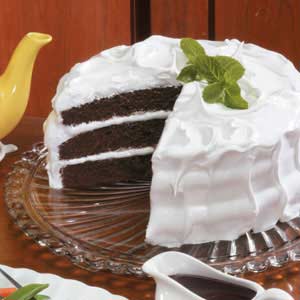 Some Veuve Cliquot, I think… 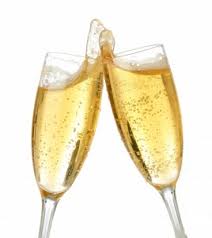 Oh, and some Jägermeister, because I know she likes it. 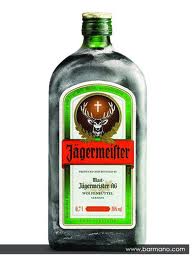 And some special entertainment… Jeff Dunham and Achmed, the Dead Terrorist:

From the time I first ran into her site and recruited her for our group, I have always loved it that Courtney writes about serious subjects in her own unique way, treating English like a foreign language, (sorta like James Joyce meets Clausewitz on ‘shrooms), but what stands out most about her for me is her sense of fun. I can always count on her to do something that makes me laugh. Who else would find a typeface that prints everything backwards and send me an e-mail written with it?

This is more important than it seems, because with what’s going on nowadays, it’s all too easy to forget sometimes that it’s supposed to be fun.

It’s truly a pleasure to have her as my friend and as part of the Council, and I’m very glad she’s here.

Have an absolutely fabulous birthday, Courts… Many more.

We had a tie this week in our Council category between The IRS Scandal Now Leads Directly To The White House by Joshuapundit and Nice Deb’s Al Sharpton Rallied With New Black Panthers As They Passed Out Zimmerman ‘Dead or Alive’ Flyers (Video).

Part of my gig when these things happen is to break these ties and it’s with great pleasure that I declare Nice Deb’s Al Sharpton Rallied With New Black Panthers As They Passed Out Zimmerman ‘Dead or Alive’ Flyers (Video) this week’s winner!

It’s a a fine piece that gives unique perspective of how the Obama Department of Justice aided and abetted by Obama intimate Al Sharpton ginned up protests and did nothing to stop the New Black Panther Party from putting a bounty on George Zimmerman’s head – something that’s supposed to be a felony. Here’s a slice: 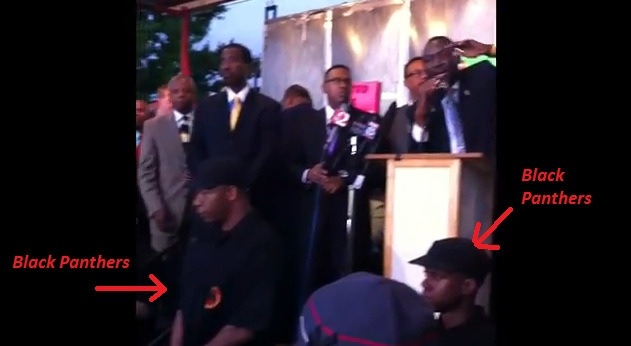 The Last Refuge’s epic, blockbuster, follow-the-money, tour de force, A Nation of George Zimmermans Awakened – Understand The Fraud – Post Verdict of Acquittal discovers the race baiting networks that fanned the flames, and introduces you to a cast of shady characters who lined their pockets pushing a fraudulent racialist narrative. Believe it or not, there’s also a Pigford link to this fiasco.

I want to focus on the New Black Panthers who rallied with Al Sharpton at Mellon Park on March 22nd, 2012, and openly handed out flyers to the crowd (with which no one seemed to have a problem.)

Al Sharpton whipped up the crowd with a mortifying, race-baiting speech, and with NBPP members standing directly in front of the stage. 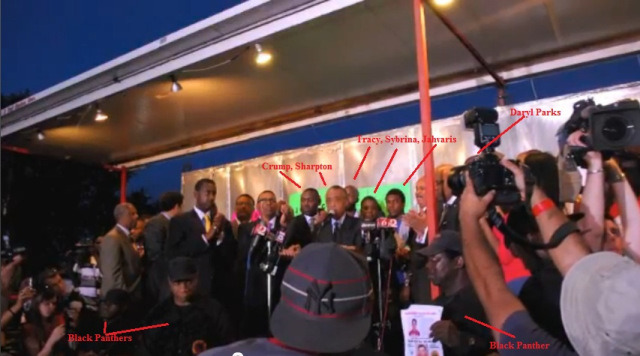 … Trayvon represents a reckless disregard for our [black] lives that we’ve seen for too long, and we’ve come here tonight to tell you enough is enough….
…. you thought it was hot,…. well, the heat has just arrived….

In March of 2012, Al Sharpton also appeared at a Sanford City Council meeting where he called out the City Government, council members, Mayor and City Manager:

…you are risking going down as Birmingham and Selma in the twenty first century… You are making the world know you as a place of racial intolerance…. you have compromised the reputation of your city for one man….

After George Zimmerman was interviewed by Sean Hannity on Fox News following the verdict, MSNBC denied that Sharpton had “rushed to judgement as alleged. They said in a statement:

“MSNBC would like to set the record straight following some misinformation presented by Fox News during the interview with George Zimmerman last night,” MSNBC wrote in a statement sent to POLITICO. “Reverend Al Sharpton never ‘rushed to judgment,’ as stated by Mr. Hannity. Reverend Sharpton repeatedly called for calm and for a more thorough investigation in the wake of the tragic events. Ultimately, the authorities agreed an arrest was warranted.”

The credibility impaired network has every reason to be worried that their already damaged reputation is about to take another major hit with Zimmerman’s defamation lawsuit in the works.

In our non-Council category, the winner was Victor Davis Hanson with Facing Facts about Race submitted by Joshuapundit. It’s about what you’d think it’s about. Do read it.

Here are this week’s full results. Bookworm Room and Simply Jews were unable to vote this week, but were not affected by the 2/3 vote penalty.

From Daniel Greenfield at Frontpage News:

Because he’s an American patriot. And nothing says patriotism like trying to join the KGB.

True patriots who defect to an enemy country that has less human rights than the worst state in America don’t let little facts like that get in the way of their patriotism.

And who are we to question the patriotism of a Hanoi John Kerry or an Edward “Kremlin” Snowden?

Edward Snowden has applied to join a group of former Russian intelligence and security officials, according to the group’s director.

Participation in a union of former KGB security, intelligence, and police officials, would likely change Snowden’s status from that of a whistleblower seeking to expose wrongdoing, to an intelligence defector who has changed sides.

Alexei Lobarev, chairman of the group called “Veterans of the Siloviki”—literally “men of power”—told a Russian news outlet on Monday that Snowden, who has been staying in a Moscow airport transit lounge for a month, applied for membership in the group.

Kenneth deGraffenreid, former National Security Council staff intelligence director, said Snowden’s embrace by former KGB officials is a sign the former contractor is being used as a pawn in an international program of “active measures,” political operations aimed at harming the United States.

DeGraffenreid said Snowden, along with Army Pfc. Bradley Manning who was charged with leaking secrets to WikiLeaks, are part of a global anti-American network “that runs from Russia, to China to Iran to Venezuela to WikiLeaks and the European Union – all of whom want to do ill toward the United States.”

Lobarev, head of the former intelligence officers’ group, told Snowden’s lawyer Anatoly Kucherena, a member of the Russian government’s President’s Human Rights Council, in a July 18 letter that Snowden formally sought membership in the group, according to the Russian business publication RBK Daily.

According to the report “veteran siloviki” want to recognize Snowden as a “colleague” who formerly worked in intelligence.

As discussed previously, Anatoly Kucherena is an FSB stooge who supports every type of censorship Putin can think of. The FSB is the successor to the KGB.

Snowden is deep in bed with an enemy intelligence agency. The technical term for that is spy. Or traitor. Or in Paulland, patriot.

Over and over again, it has been our message to America and the world that Barack Obama is of his sentiments and intentions a Marxist and pro-Islamist, and that functionally, at this stage of soft warfare upon America, he is also a neo-fascist (essentially the same as a structural neo-Marxist by increment). We use the word, Marxofascist.

We try and try to spread the alert that he is the figurehead of a titanic sabotage intended to divide and disintegrate authentic America, to make it essentially a failed state, likely to make it vulnerable to a grand bargain offered by the transnational central bank complex and its globalist despots of (choose the term or terms you prefer: communitarianism, neo-Marxism, neo-fascism, statism, collectivism, authoritarianism, kleptocracy, neo-feudalism).

One of the many glaringly obvious aspects of this master plan, for anyone who wishes to open a squinting eye is racial division (before 2008, called “racial relations”) and the telegraphed moves of orchestration by these “progressives,” of the Trayvon Martin death should make it all the easier to see.

The following Daily Caller article and the poll it highlights demonstrates their success, emphasis added.

Public attitudes about race relations have plummeted since the historic election of President Barack Obama, according to a new poll from NBC News and the Wall Street Journal.

Only 52 percent of whites and 38 percent of blacks have a favorable opinion of race relations in the country, according to the poll, which has tracked race relations since 1994 and was conducted in mid-July by Hart Research Associations and Public Opinion Strategies.

That’s a sharp drop from the beginning of Obama’s first term, when 79 percent of whites and 63 percent of blacks held a favorable view of American race relations.

Although the NBC/WSJ survey addressed the politically fueled Trayvon Martin controversy only obliquely (asking how the acquittal of George Zimmerman in Martin’s shooting death had affected respondents’ views of the legal system), the survey’s historical time frame — which shows the steepest declines in positives and increases in negatives coming in the last two years — suggests the firestorm over the Martin case played a role in diminishing the high solidarity between whites and blacks that was exemplified by Obama’s election.

Many Americans of African heritage have been warning of this intentionally staged and fomented division over and over again. If one were to cite examples, from clergy such as Jesse Lee Peterson and C.L. Bryant… to other learned citizens such as Walter Williams, Thomas Sowell, Eric Rush, and Larry Elder… to the repentant and endearing Obamaphone lady… it could all fill volumes.

However, offered below is but one succinct set of expressions, from a recent Hannity broadcast, most of it by a fair-skinned woman in an orange dress. At least Monica Crowley came along a good ways in explaining the problem, though she stopped sort of this little matter of America-destroying revolution.