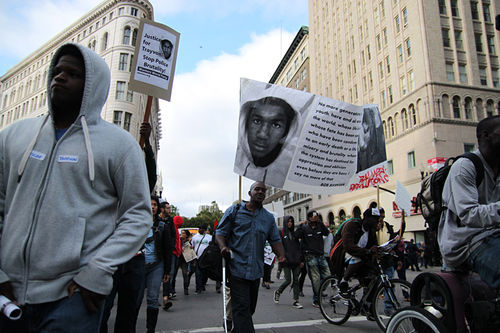 Jospeh Geha/SF Weekly: Many people may be new to the protest game, but the signage they’re using comes from old pros with an old cause.

Absolutely predictable. It turns out that communists are stirring racial tensions and are directly involved and behind the Trayvon Martin protests in numerous cities including Oakland, San Francisco, Los Angeles, Chicago and New York. All Progressive strongholds. Meet Bob Avakian of the Revolutionary Communist Party. At 70, he’s still getting his kicks with fomenting mob violence, race baiting and cop hatred.

Bob Avakian is the Chairman of the anti-capitalism, Maoist Communist party formed in 1975 within the United States, the Revolutionary Communist Party.

In “From Ike to Mao and Beyond” (2005), Avakian tells the story of a middle-class California boy who moved left during the ’60s, first in the Free Speech Movement and Students for a Democratic Society at Berkeley, then with the Black Panther Party, and finally into the far-left Maoism of the party he founded in 1975 the revolutionary Union – later to become the Revolutionary Communist Party.

In 1979 Avakian was arrested at a demonstration against Deng Xiaoping’s visit to the White House; charged with assaulting a police officer, he fled the United States for France. But that didn’t keep him away, oh no. Here is background on the RCP:

The RCP has roots in the New Left of the 1960s and 1970s era and has active chapters in at least 15 population centers. RCP leaders believe “elections are not the arena where decisions are made about the future direction of the society” and do not participate in them.

Their magazine/newsletter is called Revolution and is published biweekly and is on their website.

Employing young people as ‘useful idiots,’ Avakian led protests in Oakland claiming: “We are all Trayvon Martin,” and earnestly led lobbying for racial unrest. Blatant and unafraid for all to see, this communist rally is the underlying heart and soul of the Obama administration and his willing foot soldiers. They are brown shirts gone red. In league and lockstep with the Stop Mass Incarceration Network, using Trayvon Martin as their martyr (when in reality it is only a mask for communistic revolution underpinnings), these Marxists forward the agenda of Mao Zedong and Joseph Stalin. Heroes of Barack Obama. Ironically, the majority of these communists are middle-aged white men, screaming about the injustice of racism. Inciting riots that will hopefully spread far and wide, creating the chaos that communists need to bake a Marxist cake. Oh, hell yeah! It’s their heartfelt dream and they are desperate to see it come about. Violent and secretive, this is the nature of the Obama administration — his Stasi come to life.

These communists did not just infiltrate the Trayvon Martin protests, they organized them. Their gripes range from racism to capitalistic imperialism to the military. All talking points for the Marxist left. This is nothing new. You see it in the rewriting of history; the claim that evil is good and good is evil; the perverting of morality and religion to the Marxist cause. With slick words, deceit disguised as strength, they recruit especially from the young and the poor — claiming they will help them, empower them, free them… When in reality, they are used and discarded (many times violently) in the pursuit of wealth and power.

Their mantra should go something like: “Give me your depraved, your disowned, your disillusioned… — we will give you your heart’s desire — briefly, and then we’ll eliminate you.” Sound familiar? It should. The devil is literally in these details.

The media is more than willing to observe and defend the communists. Communist race baiting is all the rage all over America. Can the reemergence of the Occupy Movement be far behind?