…the tribunal resorts to repackaging a Hitler-era policy against Serbs, as a Serbian policy against Hitler’s side. An astonishing paragraph appeared in The New York Times and Al Jazeera. Astonishing even from the tried and true Balkans tall-tellers who for 20 years have been doing the bidding of their Islamic and other anti-Serb masters. Indeed, this one outdoes the countless other outsize accusations against the Serb side that we’ve grown numb to by now.

That’s because the phrase is so familiar, so often recited by those whose families perished as a result of it. “Kill a third, convert a third, expel a third.” That was the stated and executed policy of Hitler’s Croatian Ustashe regime. And so if the victims’ descendants were to see the day that the dreaded phrase would be mis-attributed and even inverted, it would momentarily transport them into another dimension, one where such unimaginable gall was possible. And to a surreality where such a glaring historical perversion and subversion could actually go — as all astonishing things Balkan-related do — unnoticed by the entire third dimension. (Except for a handful of us ‘cranks’ who pay attention to the ongoing dissolution of Germany’s eternal target, the Former Yugoslavia, successor state Serbia.)

That day arrived on July 12th, the traditional day for articles commemorating the July 11th, 1995 Srebrenica “genocide.” Written by Western journalists who feel an ongoing compulsion to mourn the deaths of Allah’s soldiers.

The ultimate result of Ustasha crimes being suppressed, denied and excused is that the SERBS get blamed for them:

“[Appeals judges] said there was evidence from meetings attended by Karadzic in the early 1990s ‘that it had been decided that one third Muslims would be killed, one third would be converted to the Orthodox religion and a third will leave on their own’.”

“For example, the judge said, evidence presented during the trial showed that ‘in meetings with Karadzic “it had been decided that one-third of Muslims would be killed, one-third would be converted to the Orthodox religion and a third will leave on their own” and thus all Muslims would disappear from Bosnia.’”

Not only is this a lie, it is a word-for-word plagiarism of Ustasha minister Mile Budak’s assertion from 1941, that the objective of [Croatian fuehrer Ante] Pavelic’s state was “kill a third, convert a third, and expel a third” of the Serbs.

[Even] Wikipedia indicates that Budak said this at a speech on July 22, 1941 in Gospić — where Serbs were brutally murdered in 1941 as well as 1991: “The movement of the Ustashi is based on faith. For the minorities we have three million bullets. We shall kill one part of the Serbs, expel the second part, and convert to Catholicism the third part of them.”

What both present-day “Bosniaks” and Croats did in NDH [Hitler-bestowed Independent State of Croatia], and the Albanians did in occupied portions of Serbia, during the 1940s, clearly qualifies as genocide under Lemkin’s definition. So does [1990s Croatian president Franjo] Tudjman’s plan to eradicate Serbs from territories he claimed as Croatia, or the KLA’s pogroms of Serbs in occupied Kosovo, or the ethnic cleansing of Muslim- and Croat-controlled portions of Bosnia and Herzegovina. Yet it’s the victims of these atrocities that are being accused of “genocide” — and even falsely framed using the language of their very executioners!

Just on the face of it, the blatant juxtaposition of Eastern Orthodoxy today being an aggressive, expansionist, proselytizing belief lends laughability to the projective phrase. Even someone who has never heard of the Balkans would think it a strange charge. At the same time, we do know of at least two far more aggressive religions — Islam and Catholicism. Both, coincidentally, historically anti-Orthodox. On that point, I close with the article that Malic wrote while trying to recover from glimpsing the devil’s face in the pages of Jazeera-Times:

Two months ago, I wrote about a horrifying feature of Yugoslavia II (1945-1991): the moral equivalence the regime of Josip Broz Tito imposed between the royalist Serbs and the Nazi Croats (both Catholic and Muslim).

The very real genocide (entirely fitting Lemkin’s definition) of Serbs in the “Independent State of Croatia” (NDH) was thus systematically minimized and suppressed, while the royalists (”Chetniks”) were accused of massacring Croat and Muslim civilians and open collaboration with the Nazis. The West participated in this cover-up, partly to prop Tito’s regime as a wedge in the Eastern Bloc, but also to protect the Roman Catholic Church, whose clergy backed the NDH.

Thanks to the suppression of truth about the NDH, Croat exiles were able to impose the myth of their own suffering at Communist hands…as a foundation of an independent Croatia proclaimed in 1991 (and forcibly “cleansed” of Serbs by 1995, with [the West’s] help). Part and parcel of this was a media operation in the early 1990s, by which the heirs of NDH were presented as victims, and their intended victims as executioners:

“…the Croatian and Bosnian past was marked by a real and cruel anti-semitism. Tens of thousands of Jews perished in Croatian camps. So there was every reason for intellectuals and Jewish organizations to be hostile towards the Croats and Bosnians. Our challenge was to reverse this attitude. And we succeeded masterfully.” (James Harff or Ruder Finn, 1993 interview)

This went beyond “reversing the attitude” of Jewish organizations; through the legerdemain of perception management, the very real Nazi connections of Croats, “Bosnians” (i.e. Bosnian Muslims) and later Albanians — during the 1999 attack on Serbia — transformed into the entirely fabricated “Serb fascism” in the Western public opinion… 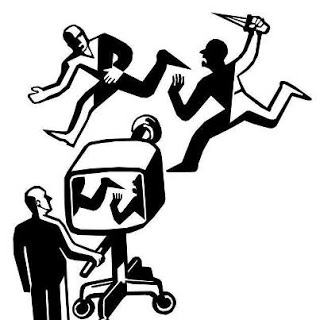 What you see vs. what happens (source unknown)

Not only did this whitewash the Holocaust, it manufactured a cover for its continuation, this time under [Allied] sanction. The outcome of NATO’s “Deliberate Force” (1995) and “Allied Force” (1999) was arguably worse than of Hitler’s “Strafgericht” (1941): there are hardly any Serbs left in today’s Croatia, while those that survived 14 years of ethnic cleansing, pogroms, murder, rape and worse in Albanian-occupied Kosovo are now being forced to submit to KLA rule. Serbia itself has a quisling government far worse than the puppet regime of [WWII] General Nedić. Only in Bosnia did the Serbs manage to defend their rights, though the political assault on them shows no sign of abating.

Part of that assault have been the “war crimes” trials of the entire political and military leadership of the Bosnian Serbs. The ICTY, a “court” conjured by the [West] for the purpose of legitimizing its Balkans meddling, is insisting that the Bosnian Serbs committed “genocide” against the Muslims. Not in a general sense, mind you, but in seven or so municipalities, cherry-picked by the prosecutors. Both this, and classifying what happened in (or rather, outside) Srebrenica in 1995 as genocide are patently absurd.

The actually legitimate ICJ ruled in 2007 against the claim of “municipal genocide”. Last year, the ICTY “judges” dropped that particular charge against wartime Bosnian Serb president Radovan Karadžić. This week, an appeals panel led by ICTY president Theodor Meron, reinstated the charge — on July 11 no less, the date Muslims mark as the anniversary of “genocide” in Srebrenica.

“By scheduling the hearing on what has become a sacred date for Bosnian Muslims, the presiding judge, Theodor Meron, seemed to want to send a message to the war’s survivors as he recited an usually long and gruesome list of atrocities committed against Muslim civilians and prisoners of war.” (emphasis added)

However, among the “evidence” cited by Meron is the following:

“…there was evidence from meetings attended by Karadzic in the early 1990s ‘that it had been decided that one third Muslims would be killed, one third would be converted to the Orthodox religion and a third will leave on their own’.”

Lest you think this is Al-Jazeera editorializing, Simons cites the same passage in her NYT article. So does Carol Williams of the LA Times. And here it is, in the official ICTY press release:

“For example, the Appeals Chamber observed that the Trial Chamber received evidence that in meetings with Karadžić “it had been decided that one third of Muslims would be killed, one third would be converted to the Orthodox religion and a third will leave on their own” and thus all Muslims would disappear from Bosnia.”

If this is what it considers “evidence,” the ICTY ought to disband itself immediately, disbar all its judges and prosecutors, and sentence itself to whatever is appropriate for contempt of court and obstruction of justice. Because this particular claim is a word-for-word plagiarism (with names changed) of a statement made by Mile Budak, Nazi Croatia’s minister of culture, in a 1941 speech about Croatian plans for the Serbs.

Nor can ICTY “judges” claim ignorance of this fact, because the original statement by Budak was quoted in the Karadžić “trial” not two months ago, by Nenad Kecmanović (testifying on May 31 this year, official transcript, end of p. 7133).

Take a minute for this to sink in. Not only is a political court, acting on political instructions, fabricating a political accusation for political purposes, the false evidence it cites to accuse the Serbs of genocide is based on a Croatian Nazi plan to commit a genocide of Serbs. This isn’t just blaming the victim, this is blaming the victim in order to amnesty the culprit.

And not a single Western journalist covering the “trial” has noticed this.