By: Peter Rollins
Accuracy in Media 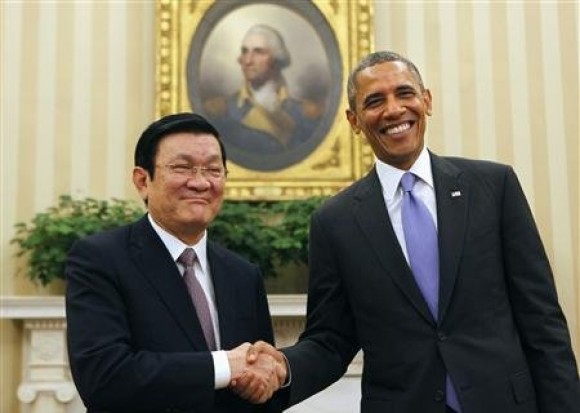 President Obama’s recent extemporaneous remarks about Ho Chi Minh being a Jeffersonian Democrat may be the result of his viewing the PBS series entitled Vietnam: A Television History (1983). (This 13-part survey was produced by WGBH of Boston; journalist Stanley Karnow’s book entitled Vietnam: A History was the companion publication.) Anyone who lived through the era of U.S. military involvement will recognize this argument as a standard New Left critique of the war, a view that would make sense to Obama’s Chicago neighbor, Bill Ayers. Daniel Ellsberg, who stole the “Pentagon Papers” from the Rand Corporation, certainly held this view even though the Pentagon Papers contain a variety of conclusions about Chairman Ho. (Few read the Pentagon Papers, so the argument has stuck; years ago, Douglas Pike (deceased 2002) pointed out to me in an interview that one could prove almost any view about the roots of the Vietnam conflict using that loose collection of studies from numerous scholars under contract to Rand—where Ellsberg worked as a trusted consultant until he copied and distributed the secret Vietnam studies.)

When the series was broadcast in 1983, there followed demonstrations by Vietnamese Americans living in Washington, D.C., New Orleans and Los Angeles. The portrayal of Ho Chi Minh as a Jeffersonian—as opposed to a doctrinaire Leninist—was especially painful for the Vietnamese. A number of them called Reed Irvine, the chairman of Accuracy in Media, and asked that something be done to set the historical record straight.

Irvine convened a 1984 conference in Washington, D.C. where diplomats, military leaders, Vietnamese, and scholars of Far East history focused on the Ho Chi Minh theme, as well as other myths of the Vietnam conflict. I was brought in to interview participants, to seek out other experts and to produce two documentaries critiquing Vietnam: A Television History. The resulting programs were premiered in the Reagan White House, a development that inspired many metropolitan film and TV critics to complain that PBS was being bullied into broadcasting the AIM counter-programs. (This argument had been angrily asserted by the WGBH producer at a “fam tour” in Phoenix, Arizona where media writers gathered to hear about PBS offerings for the year. The president of WGBH later told the producer to use more restraint since there was no proof for his snide assertion and it was, in itself, harmful to the PBS image.)

At the same time I was working on the programs—but unknown to me at the time—James Banerian of San Diego was assembling a volume that critiqued the WGBH series episode by episode. The primary sources were former South Vietnamese politicos in Southern California, among whom Banerian lived and worked. At least one of the chapters in Losers are Pirates: A Close Look at the PBS Series… (1985) is devoted to the patently false linkage of Chairman Ho to American democratic ideas and practices. The Vietnamese helping Banerian knew first hand—and impartial scholars knew from Ho’s record—that he was not a wannabe democrat, but a Vietnamese Stalinist whose “reform” programs cost thousands of lives.

Banerian’s methodical critique is still available on Amazon, as are my two programs for Accuracy in Media under the title Television’s Vietnam (two shows on one DVD are available at aim.org).

(Please click on this link to see and hear the analysis provided on Uncle Ho by my documentary Television’s Vietnam: The Real Story.)

Peter Rollins is a former Marine, a Harvard Ph.D., a professor of English and American Studies, the author or co-author of numerous books, and the Producer of “Television’s Vietnam.”