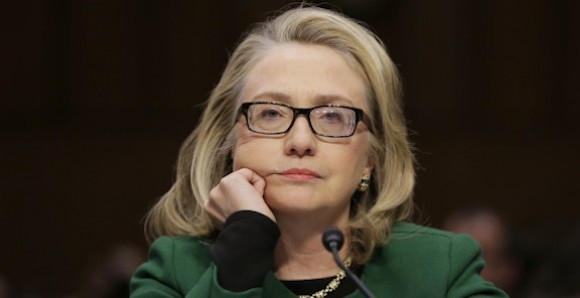 A newly formed Commission is determined to get to the bottom of the many questions surrounding the terrorist attack on the U.S. compound in Benghazi last September 11th. The Citizens’ Commission on Benghazi, organized by Accuracy in Media, held a press conference at the National Press Club in Washington, D.C on July 30th to announce the launch of the fact-finding group.

Four of the current 10 members of the commission spoke and took questions. They were Roger Aronoff, Editor of Accuracy in Media, Retired Admiral James “Ace” Lyons, former CIA officer Wayne Simmons, and Retired General Thomas McInerney. (Click on the links to each name to hear their comments. Video of the Q&A will be posted on Thursday.)

The media, which for the most part seem to have adopted the Obama administration’s declaration that Benghazi is a “phony scandal,” likewise took a lukewarm reception to the press conference and did not send reporters, just cameras. NBC and Fox News had cameras running for the full news conference. This does not make the revelations that we hope will come forth from our efforts any less important to the American public. According to a recent Fox News poll, 59% of voters say that they are following news about Benghazi at least “somewhat closely.”

The Commission speakers announced a conference that will take place in Washington, D.C. on September 16th at the Heritage Foundation, and issued the Declaration of the Citizens’ Commission. “Now is the time for all good men to come to the aid of their country, to help explain, ‘What difference does it make’ how and why these people died in Libya,” states the Declaration. “Did our elected and appointed leaders do enough to protect our ambassador and other Americans involved, and if not, why not?”

“But it is our firm belief that people sitting at home, watching this on TV or over the Internet … will feel compelled to step out of the shadows, and bring new insights and information to this investigation that will lead to additional conferences or meetings by the Commission.”

You can watch the comments from each of the four speakers in attendance at this press conference. They are posted on the Commission’s new website, www.aim.org/benghazi, where you can learn about what happened regarding Benghazi, and keep up with the Commission’s work. More information regarding the Benghazi attacks and the press conference will be forthcoming in the weeks ahead.

Even in quiet peaceful New Zealand. There are al Qaeda operatives in New Zealand who were trained in camps overseas, Prime Minister John Key says.

He was explaining on Thursday why the Government Communications Security Bureau (GCSB) needs to have the authority to spy on New Zealanders on behalf of the police and the Security Intelligence Service (SIS).

“In the real world, in New Zealand, there are people who have been trained in al Qaeda camps, who operate out of New Zealand, who are in contact with people overseas, who have gone off to Yemen and other countries to train,” he said on MoreFM.

“I accept there’s a balance between national security and privacy but people need to put a bit of perspective around it.”

Mr Key says flags are raised when suspicious phone calls are made.

“If you dialled up a person on an international list, an al Qaeda operative, you could be reasonably sure that would set a flag up somewhere – and for bloody good reason.”

The bill that gives the GCSB authority to spy on New Zealanders is due for its second reading in parliament on Thursday afternoon.

Mr Key says Labour is playing politics and the Greens simply don’t believe the state should have any powers.

“That’s a lovely world to live in,” he said.

Mr Key explained the GCSB helped other agencies for years, right through the term of the previous Labour government.

He said the bill gives it legal authority to do that, and significantly strengthens oversight of its surveillance.

It wasn’t until last year that it was discovered legislation covering the GCSB had a clause in it which forbids it to spy on citizens or residents.

It stopped helping the police and the SIS in August last year, and won’t start again until the bill is passed.

Mr Key says national security has been compromised in the meantime.

I have interviewed a New Zealander, a convert to Islam and who was trained by Muslim terrorists in the Middle East and sent back to New Zealand as a “sleeper.”

He told me that his Mosque – by no means an extremist one, was full of young men who adored New Zealand. They loved the beaches, the lifestyle – but they still wanted to go and commit at least one act of Jihad in their lives.

And yet there are still people who tell us the government should have no surveillance powers. New Zealand writer/blogger/researcher Trevor Loudon will be touring the United States with his new book “The Enemies Within: Communists, Socialists and Progressives in the US Congress,” in early August to early November 2013.

Below are revised dates for the first month, with confirmed events so far in Washington, D.C., Virginia, South Carolina, Florida, Georgia and Texas.

Contact details and venues will be advertized closer to the time of appearance.

If you’d like to help make this tour a roaring success, you may make a contribution through this button.