The U.S. Military Has Awarded Contracts to Al-Qaeda in Afghanistan

After intensive consultation with his advisors, President Obama has decided to modify the formula used for calculating the Dow Jones Index. On January 1, 2014 the Dow Divisor will be changed to 30. The result of this change will be that the Dow Jones Index drops from the current 15,658 points to about 68 points. The underlying value of the 30 component stocks of course remains unchanged. With this modification to the formula Obama aims to make the large Dow fluctuations of recent decennia a thing of the past, and hopes that this will bring stability to the stock market. Banks, major investors and pension funds welcome this change in the Dow Jones Index formula.

To understand Obama’s proposal we must go back in Dow Jones history. The Dow was first published in 1896. The Dow was calculated by dividing the sum of the 12 component company stocks by 12:

The shares of a number of companies were split in 1927, and for those shares a weighting factor was introduced in the calculation. The formula is now as follows
(x1 = American Can is multiplied by 6, x2 = General Electric by 4 etc. )

Since then the Dow Divisor has acquired a new value every time there has been a change in the component stocks, with a consequent change in the formula used to calculate the index. This is because at the moment of change the results of two formulas based on two different share baskets must give the same result. When stocks are split the Dow Divisor is changed for the same reason.

After the stock market crash of 1929, 18 companies were replaced in the Dow and the Dow Divisor got the value 15.1. 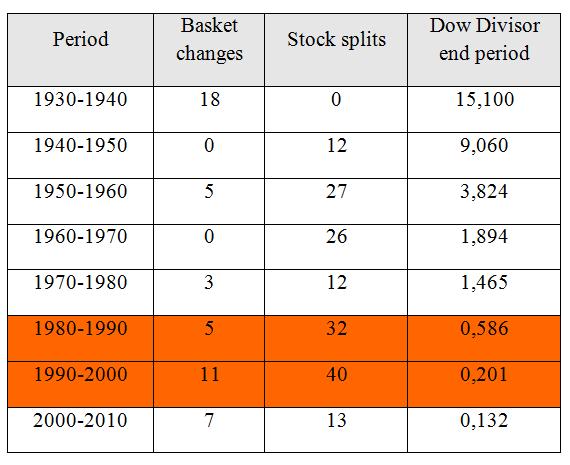 Table: Changes in the Dow, stock splits and Dow Divisor

The table above makes it clear that the Dow Jones formula has been changed many times and that the Dow Divisor in the period 1980-2010 has actually become a Dow Multiplier, due to the large number of stock splits in that period. Where in the past the sum of the share values was divided by the number of shares, nowadays the sum of the share values multiplied by 7.5. Dividing by 0.132 is after all the same as multiplying by 7.5. (1 / 0,132 = 7,5). This partly explains the behaviour of the Dow graph since 1980.

The proposed change on 1 January 2014 restores the formula to what it originally was: the sum of the share values divided by the number of component shares.

The emotional factor in the current formula, the nervousness or euphoria of investors resulting from large fluctuations in the Dow, will be greatly reduced by this change (230 times) and so rationality should gain the upper hand in investor’s decisions.

Obama’s proposed change must still be approved by House and Senate. Both Republicans and Democrats have told Obama they support his proposal. Politicians, irrespective of political colour, desire stability in the stock markets. For the investor however it will take some getting used to: the Dow Jones at 68 points. Vermont’s “Independent” Senator Bernie Sanders likes to portray himself as a bit of a lone wolf socialist – the conscience of the Senate left.

In my new book: “The Enemies Within: Communists, Socialists and Progressives in the US Congress,” I devote 10 of its 700 pages to Sanders.

Bernie Sanders may be technically Independent, but in reality, he is merely a mouthpiece for the US’ largest Marxist group, Democratic Socialists of America. Despite DSA’s comparatively innocuous name, it is actually a crypto-communist group, basing its tactics on the gradualist theories of Italian Communist Party theoretician, Antonio Gramsci.

Bernie Sanders has been in the socialist orbit since he joined the Young Socialist League during his college years in Chicago.

He’s been a mouthpiece for DSA since their foundation in the 1980s. He pushes their policies in the Senate, attends their conferences and accepts their financial support. Here he is at a 1994 DSA gathering in Colorado: Here’s DSA taking credit for getting Bernie Sanders elected to the US Senate in the first place: To find out more about Bernie Sanders, 13 other socialist Senators and more than 50 Congress members, read Trevor Loudon’s new book “The Enemies Within: Communists, Socialists and Progressives in the U.S. Congress.”

The Enemies Within” will be officially released August 20, 2013, at the National Press Club in Washington, D.C.

All in your best interests of course. The new cyber security doctrine signed by President Vladimir Putin outlines cyber attacks as a major threat to international security and suggests to fight it with a special international body to manage the web.

The document that was signed by the president last week had been prepared by a panel of specialists from state agencies and ministries, including the Ministries for Interior Affairs, Defense, Justice and Communications, the Kommersant daily reported. The newspaper also quoted its unnamed sources as saying that the doctrine was prepared, at least partially, in reply to the International Strategy for Cyberspace approved by the United States in 2011.

The main threats mentioned in the doctrine were internet technology as an “informational weapon used for military-political, terrorist and criminal ends” as well as attempts of “intervention into other nations’ internal affairs”.

The last threat is Russia’s own input into the international discussion over the issue. According to Kommersant’s sources, the authorities focused on this problem after the Arab Spring events that again demonstrated the potential of the internet and especially the social networks in launching and directing mass actions and street protests.

Moscow’s approach emphasizes the strengthening of international cooperation and preventive regulative measures that would stop the attacks from happening. The proposed measures include the approval of the UN convention on international cyber security and developing “internationally accepted rules of behavior in cyber space”. Russia also wants to develop an international system of managing the internet and impose an international law that would “prevent the proliferation of the informational weapons”.

Russia’s top strategic body – the Security Council – and main security agencies are now expected to provide the president with their suggestions on particular measures to enforce the doctrine.

Please spare me those naive souls who believe the KGB (now FSB) disinformation that Putin is some white Christian Knight who will save the decadent West from Islam and the gay movement. Putin controls radical Islam. Just like he manipulates Western Christians through his control of the deeply compromised Russian Orthodox Church.

Russia President Vladimir Putin came under criticism from rights activists on Tuesday after he compared Vladimir Lenin’s embalmed corpse to the holy relics of Christian saints.

In a Monday speech before a group of supporters, Putin spoke against the idea of removing Lenin’s mausoleum from Red Square in Moscow where his corpse is housed.

To paraphrase Lenin – “the way to power is to deny your enemy his ability to make decisions in private.” Any good Leninist, as Putin surely is, would see taking control of the internet as an integral part of seizing power.

Putin’s plans for the internet must be seen for what they are – a Kremlin directed movement towards the world Leninist state.