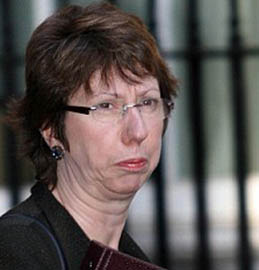 As a citizen of Italy, a member state of the European Union, and founder and president of the human rights organization, Voice of the Copts, I have followed with great interest your latest visit to my native country of Egypt — particularly your request to free former Egyptian president, Mohammed Morsi.

Discussions in Egypt inform me that Egyptians fear that your aim to have Morsi and Muslim Brotherhood leaders released from custody and dismissed from their day in court will obstruct justice owed to the Egyptian people. Without invitation from Egypt’s interim government you answered the call from the Muslim Brotherhood to investigate Morsi’s treatment under custody using this pretext to intervene in Egypt’s internal affairs and violate the sanctity of the sovereign Egyptian state.

Your viewpoint and attempt to free Morsi is well-supported by the most impressive of names from the international community but nonetheless unwelcome. The world tires of representatives from democratic nations using their platforms to aid self-serving factions — in this case, the Muslim Brotherhood — pursuing power at the expense of the innocent. Thanking you in an open letter recently, Tawakkol Karman, Yemeni Nobel Peace Prize Laureate, has drastically missed the mark in interpreting Egypt’s recent event and given you encouragement to work against Egyptian pro-democracy fighters and embrace the enemies of freedom.

Falsely characterizing Egypt’s new leadership as “coup leaders,” Karman condemns the policies and procedures of Egypt’s interim government calling them “only conducive to dictatorship and exclusion.” Apparently satisfied to ignore the realities of Muslim Brotherhood terrorism, Morsi’s anti-democratic policies, and the will of the Egyptian people, she aligns her opinion with Brotherhood propaganda in Egypt and around the world.

Hearing her comments, we now understand Karman’s silence during Morsi’s presidency when a Shariah law document became Egypt’s constitution to the horror of the free world watching. The international voice she has been given speaks loud for the return of the Muslim Brotherhood terrorist organization to Egypt’s current struggle based on the false narrative that for Egypt’s democratic process to be genuine it must include compromises with terrorists and enemies of democracy. But a fragile Egypt is not America.

Declaring Morsi was toppled on the basis of “weak pretexts,” Karman demonstrates allegiance to Morsi’s regime and not to the monumental and dynamic people’s democracy movement in existence now which she calls a “growing regression in rights and freedoms.” Her insights reveal her true intentions, and now Egyptians reject her nonsense and send her away.

In short, a misguided Karman believes that Egypt’s current governmental status constitutes a return of the terror state. Her twisted view aids her in advocating concessions for the Muslim Brotherhood. She now pleads its case under the guise of securing an “immediate return to the democratic track.” This is dishonest and dangerous. Like you, she has no legitimate business in Egypt. Still, she urges you to exert pressure on the Egyptian government. You have done so and it is wrong.

Just days after your return from your visit to Morsi in jail, U.S. Senator McCain also met with the deposed President. Afterwards in Cairo, McCain met with Jihad Hadad, a Muslim Brotherhood spokesperson designated a terrorist by the interim Egyptian government. Like you, the U.S. Senator is intervening on behalf of terrorists (“political prisoners”) behind bars in Egypt. Like Karman, Hadad urges a representative from a free nation to exert pressure on the Egyptian government for political ends.

Foreign interference against the will of the Egyptian population will create disastrous results similar to Syria where the Muslim Brotherhood is labeled freedom-fighters. What possible motive could international leaders have in manipulating a release of Egypt’s network of Muslim Brotherhood terrorists other than to contribute to the destabilization of the region? The unfortunate side effect is to rob Egyptians of their sole right to determine the future of their country for good or for bad.