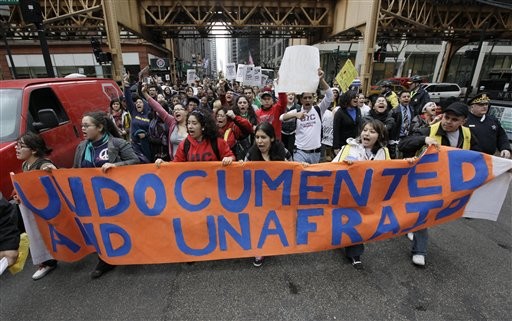 Every week on Monday morning, the Council and our invited guests weigh in at the Watcher’s Forum with short takes on a major issue of the day. This week’s question: Do you think the House will pass some version of amnesty for Illegal aliens? Why Or Why not?

Rhymes With Right: Will the House pass some form of amnesty? Yeah, they will — there is absolutely zero possibility of the House NOT passing some form of amnesty. There is simply too much pressure from the political class and the 1%ers in the media for it not to happen, regardless of the wider views of the American people.

Not that this is necessarily a bad thing. The United States needs to do something to deal with the immigration crisis. If we can get border security and employer sanctions and some sort of penalty for the illegals, then the amnesty might not be so bad. Personally, I’d like to see that amnesty contingent upon a constitutional amendment banning any future amnesty plan from being adopted, but that won’t happen. At a bare minimum, though, there needs to be some limitation on those who get amnesty sponsoring other family members who want to come to this country — perhaps a 10 year ban AFTER they get citizenship.

For me, the big issue comes to the so-called “DREAMers”. I teach those children. What do you say to a kid who has lived in this country since he or she was 18 months old when they want to go to college — or get a job — like the rest of their classmates, only to discover that neither is an option because of an immigration status they have no control over. Frankly, I think that we in the GOP have to support something to provide relief to these young people — but it cannot be as broad as the plan put forth by Obama and the Democrats.

The Independent Sentinel: They will try to cave because they are a combination of wusses and covert liberals. They also heed the advice of Democrats on how to get elected.

I have a question. Why do we owe them a shorter line to citizenship again? Why can’t they go to the end of the same line everyone else is on?

Oh, I forgot, we have to reward them for coming here illegally. I thought they only do that in California but apparently not.

JoshuaPundit: To answer the question directly, I’d be pleasantly surprised if they didn’t.

But I have a few questions to ask Republican/conservative proponents of amnestia… just to enlighten me as to their way of thinking.

1) The Democrats have never enforced US laws on border security, including the ones incorporated in the 1986 amnesty or the 2005 legislation mandating a border fence. What makes you think this latest amnestia bill is going to be any different? Especially if the Democrats maintain control of the Senate and perhaps even retake the House in 2014?

2) What are the advantages to America? Amnnestia will not get rid of a permanent underclass, something its proponents use as a talking point. In fact, the recent Congressional Budget Office analysis says that amnestia at best will only cut illegal migration by 25%. And that’s assuming that the enforcement policies in the Senate bill are actually carried out. It will bankrupt the country while creating a reliable Democrat/Big Government supporting group of voters for years as it has in places like California. There are reliable estimates that amnesty for the illegal migrants here will add a whopping $6 trillion to the national debt, a figure I personally think is understated because no one can accurately guess the fiscal impact of chain migration and family unification. So anyone who claims to be a ‘fiscal conservative’ and supports this is either lying to himself, his constituents or both. There’s no political advantage either for Republicans. Aside from alienating at least a part of the 2/3 of the Hispanic electorate that’s up for grabs and either didn’t show up or voted Republican in 2012, it will also alienate the Republican base… permanently, as even more of them stay home in 2014 and 2016 than did in 2012.

3) Are we now in the business of endorsing the moral stance of selective compassion, the idea that all animals are equal but some are more equal than others? There are over 3 million people in Europe, Asia and elsewhere who want very badly to come here, have applied legally and in many cases have skills and backgrounds much more valuable to the U.S, than that of an uneducated, unskilled laborer from Sinaloa. The first group is stuck in the morass of our present immigration system, which was largely crafted by Ted Kennedy expressly to favor the second group… which are now going to have a massive, expensive piece of legislation crafted especially for them based on their ethnicity, their proximity to the US border, and because so many of them have chosen to break our laws because our politicians refuse to enforce them. Isn’t this both racist and unjust? Shouldn’t we have a race neutral points system like Canada and Australia do that applies to all migrants? And is there any reason why those whom came here illegally should be able to jump the line?

The Glittering Eye: Until roughly a month ago I thought that some sort of comprehensive immigration reform that would include something that some people would call “amnesty” while others denied that bitterly would pass both houses of Congresses and be signed into law. Now I’m not so sure.

If I had to guess and based on conditions on the ground right now, I think I would say no comprehensive immigration reform at all. As I see things there’s a stand-off with House Republicans demanding an unachievably high level of border control before all else and Senate Democrats insisting on a “path to citizenship” as the sine qua non of immigration reform. I don’t see the makings of a compromise there.

One thought on “Forum: Do you think the House will pass some version of amnesty for Illegal aliens? Why Or Why not?”