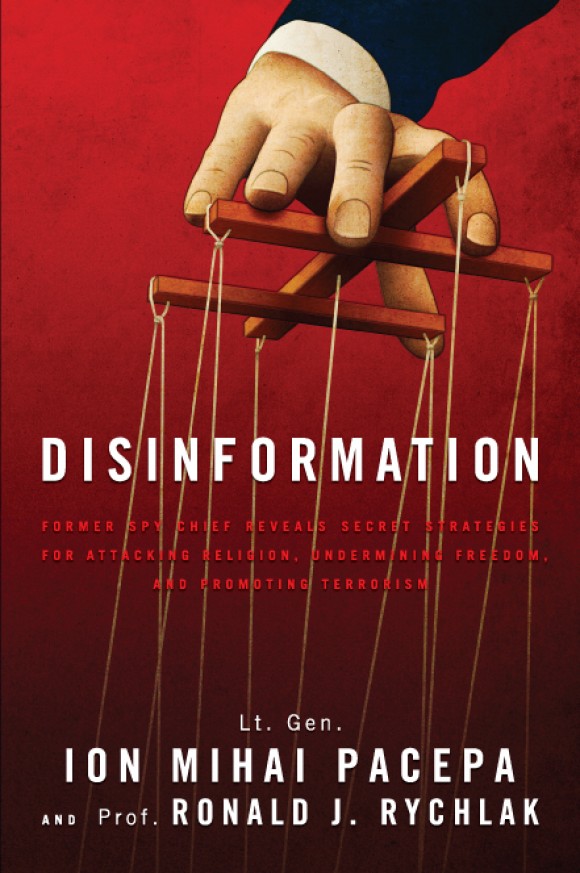 The approaching 50th anniversary of the assassination of John F. Kennedy is sufficient reason alone to buy and read the new book, Disinformation: Former Spy Chief Reveals Secret Strategies for Undermining Freedom, Attacking Religion, and Promoting Terrorism. The co-author, Ion Mihai Pacepa, the highest-ranking defector from the former Soviet bloc, is an expert on the Kennedy assassination and documents how the Soviet Union and its comrades worked overtime to blame the CIA, right-wingers, oil men and others for the murder of the American president. Many people still believe these false allegations to this day.

In fact, the assassin, Lee Harvey Oswald, was a Marxist with Soviet and Cuban intelligence connections and sympathies. The evidence is simply overwhelming that the Communists killed Kennedy because Kennedy, an anti-communist liberal, confronted the Soviets in Cuba and authorized the overthrow of the Castro regime.

Pacepa’s co-author, Professor Ronald J. Rychlak, adds to this important book by explaining in detail the campaign by the Soviet intelligence service, the KGB, against the Roman Catholic Church, especially the elaborate and engineered smears of Pope Pius XII being “Hitler’s Pope.”

Ominously, by analyzing the conduct of Russian foreign policy and threats against the West, the authors say the Russians may have secretly built a “new generation” of nuclear weapons, developed in hidden “nuclear cities,” and that “a nuclear midnight,” prepared by Iran, could be launched on Israel and the West. They even suggest that a Russian role in the 9/11 terrorist attacks on America cannot be dismissed.

Granted, this is a lot for people to swallow. But with the anniversary of the Kennedy assassination approaching, the part of the book on Oswald should take center stage and serve as a reminder of the forces that still are arrayed against the United States.

For those who think this is old news, since the Soviet Union collapsed, consider Pacepa’s point that Russian President Vladimir Putin, a former KGB officer, and his ex-KGB cronies “own Russia” today. They have transformed Russia into “the first intelligence dictatorship in history,” he says. In other words, the enemy remains the same but has changed appearances; Putin appears to rule a “democratic Russia,” with competing centers of political power.

In Russia, Pacepa and Rychlak note, Putin has been ruthless, with more than 120 journalists murdered because they were trying to uncover the secrets of Putin’s nuclear weapons policies.

Pacepa ran the Romanian intelligence service and has extensive knowledge of Soviet/Russian intelligence activities, especially in the field of disinformation. He maintains that disinformation, which confuses or misleads Western audiences, is the most important area of warfare for America’s enemies. The basic purpose is to convince us that foreign threats do not exist and that those who do expose our enemies are themselves the enemies.

Pacepa previously wrote the book, Programmed to Kill: Lee Harvey Oswald, the Soviet KGB, and the Kennedy Assassination, which also is a must-read.

He documents that Oswald was recruited by the KGB when he was a U.S. Marine stationed in Japan and that he, after defecting to the Soviet Union, came back to America three years later for the express purpose of killing Kennedy. Even though the Soviets for their own reasons subsequently tried “to turn Oswald off,” Oswald went ahead with the plan and was already “programmed” by the Communists to kill Kennedy.

The “Dragon Operation,” designed to shift blame for Kennedy’s murder away from the Communists, “has become one of the most successful disinformation operations in contemporary history,” Pacepa and Rychlak note.

This is significant because of the press reports that National Geographic Channel is airing “Killing Kennedy,” a two-hour film, in November, while PBS has a new two-part “American Experience” documentary, “JFK,” airing November 11th and 12th.

The chapter in the Pacepa book on the Kennedy assassination is titled, “The End of America’s Innocence,” but 50 years later America still has not come to grips with the fact that an American president was killed as a result of a Communist conspiracy based in Moscow and Havana.

President Johnson, fearing another nuclear confrontation with the Soviet Union and Cuba, didn’t want the truth to come out. The Warren Commission and a special House committee whitewashed the Communist connection because they “lacked the inside knowledge of Soviet intelligence,” the authors write.

Not only did a Soviet/Cuban agent kill Kennedy, but also, as the book cites, there is evidence that the Soviets were in fact behind the attempted assassination of Pope John Paul II.

In other revelations, the authors say that:

The disappointing part of the book is the failure to adequately explain the background and intentions of President Barack Obama. The authors write that Obama’s pastor, Jeremiah Wright, was associated with the KGB-inspired “liberation theology” movement and that Obama was “bitten by the Marxist bug.” They write about Obama’s “tactics for hiding his past” and note that he ran for the presidency 2008 as a “secret socialist.”

All of this is true, but utterly incomplete. In fact, as we have documented, Obama was mentored by Communist Party member Frank Marshall Davis during his critical growing-up years in Hawaii. We documented this in 2008, releasing Davis’s 600-page FBI file in August of that year.

Noting Obama’s dedication to “change,” the authors write, “Let us hope that President Obama will also change himself.”

What we need from Pacepa is an analysis of Obama’s relationship with Putin’s Russia, not a false hope that Obama might change.

Paul Kengor’s excellent book on Davis, The Communist, made the case that Obama’s policies were inspired by the kind of thinking Davis imposed on the future president. Glenn Beck, to his great credit, published this book and featured it on his television network.

A Professor at Grove City College, Kengor wrote the foreword to the Pacepa-Rychlak book, noting how it documents the history of Soviet support for Islamic terrorism “and dual promotion of virulent anti-Semitism and anti-Americanism among Middle East Arabs.” He cites the assertion in the book that the Soviet bloc planted some 4,000 agents of influence in the Islamic world.

The introduction was written by former CIA director R. James Woolsey, who suggests that while Russia may be seen as declining in its influence, largely because of its own demographic problems, current disinformation operations directed at the United States come from Russia “and countries in the Middle East.”

He asks, “…why are many governments in the Mideast essentially doing the same thing [as the Soviets], such as spreading the crazy stories about 9/11—that it was the CIA, or the Mossad?”

Woolsey has his own answer—that dictators “need enemies”—but the ultimate purpose also seems to be to confuse the American people about the nature of the enemy. The crazy stories he refers to have been regular fare on the Al Jazeera and Russia Today propaganda networks that are carried in the United States, and which today promote the line that the NSA is more of a threat to the American people than the Muslim Brotherhood or Moscow.

With the defection of NSA leaker Edward Snowden to Russia and his grant of political asylum from Putin, the intelligence war documented in the Pacepa-Rychlak book does indeed continue. But to many in the West, it is America—not Putin’s Russia—that is the real threat to world affairs.

Obama, responding to the NSA controversy, seems prepared to accept restrictions on the ability of the NSA to monitor foreign threats. Perhaps Snowden has accomplished what Obama secretly hoped would occur anyway.

If this happens, it will be another victory for the disinformation apparatus, at a time when the threat grows and the lives of millions hang in the balance.