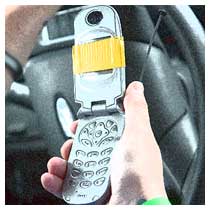 A disabled Christian man, Shafaqat Emmanuel, and his wife Shagufta Kausar were arrested in Pakistan’s Punjab Province on suspicion of sending a blasphemous text message. It is quite remarkable that blasphemy is something that a person can even be accused of in the twenty-first century!

It has been reported that disabled Shafaqat Emmanuel was in fact tortured by the police in front of his family. In typical medieval tradition the torture was reported to have been accompanied by the extraction of a false confession. However, he only “broke” when the officials threatened to start torturing his wife. Who would not admit to false charges under such conditions?

Such legal abuse is always a possibility in any jurisdiction where the law is influenced by sharia principles. Equality before the law does not exist under sharia and no meaningful human rights can exist. If anything sharia exacerbates community tensions. Under sharia Christians are second class citizens and this case illustrates that Christians have this status in Pakistan. This case is yet another example of why it is important to oppose sharia. How many more lives have to be blighted by sharia before the dangers that it poses are understood by world leaders, particularly by Western leaders? Western leaders should stop pandering to the sharia lobby both at home and abroad.

Read the full story over at World Vision In Progress.