Preliminary box-office results reported by Deadline.com say Oprah Winfrey’s role in the movie ‘The Butler’ was a drawing point for Friday night attendance. But the movie still doesn’t look like the blockbuster is was promoted to be.

Also interesting to note is that 72% of Fandango’s The Butler ticket-buyers who were surveyed claimed that co-star Oprah Winfrey’s involvement increased their interest in seeing the film. Love her or hate her, Oprah in her first movie role in 15 years is helping The Butler‘s box office right now.

Much to the disgust of conservative Republicans, when word came out that ‘Hanoi’ Jane Fonda was given the role of Nancy Reagan, it appeared a backlash may develop in protest. Whether the protest is successful or not will be seen in coming days or weeks but one thing is sure and that is no one polled anyone on what negative affect ‘Hanoi’ Jane’s role would have.

Now, in a story published on The US Report, in a story about the casting of ‘Hanoi’ Jane the director acknowledges his political activism and admitted the insult was intentional. 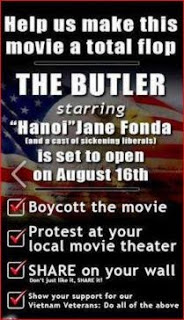 Lee Daniels, director and producer of the film The Butler did a Q&A with Politico’s Patrick Gavin.

The film has already become a target for Vietnam-era veterans and their supporters because Jane Fonda was cast as First Lady Nancy Reagan.

Fonda’s activism against the Vietnam War and her vitriolic attacks on U.S. troops as well as her praise for repressive government systems made her quite possibly the worst choice in the universe to play President Ronald Reagan’s wife.

Was Fonda deliberately cast in the role as an insult?

If an actress stands for most of what Reagan was against, Fonda is the poster femme.

Daniels acknowledged there was a political slant, not only in the choice of actors, but in the spirit of the film.

The group Boycott Hanoi Jane Playing Nancy Reagan has grown to more than 26,000 supporters on Facebook. Many supporters of the boycott remember Fonda’s behavior at a time similar to today, when there was bitter division among the people and weak leadership in Washington.

The US Report urges all conservatives, Republicans and others who admire the Reagan legacy and who respect the U.S. military to boycott the film and click ‘Like’ on the Facebook page.

America’s enemy confirmed years after the war that Fonda and other celebrities were a valuable asset in their fight against the U.S. on behalf of communism.