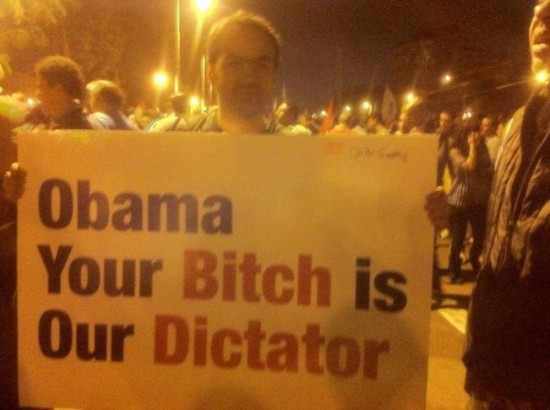 The military of Egypt is respecting the universal rights of all Egyptians by rooting out Muslim Brotherhood terrorism, the backers of Morsi’s regime – finding smuggled weapon stashes and arresting Morsi’s guest militias (Hamas and Al Qaida terrorists). After more than two years of protests to brin3dg about the removal of two dictatorships, the latter installed through fraudulent elections billed as “free and fair,” Egyptian freedom-fighters backed by the army must not retreat from their chance now to expose and expunge radical terrorists who came dangerously close to dominating Egypt for the long term. This means countering the efforts of the Obama administration inside Egypt.

Everything hinges upon the unthwarted dedication of the Egyptian army to continue with actions loyal to Egyptian pro-democracy freedom-fighters. So far it has done so by not heeding the call for “restraint” coming from the U.S. White House and Department of State in wrestling with an entrenched terror group fallen from “legitimacy.” Implying that Egypt’s military is sparking violence rather than dispelling it, an August 14 White House Statement by the Press Secretary on Egypt advises, “Violence will only make it more difficult to move Egypt forward on a path to lasting stability and democracy, and runs counter to the pledges by the interim government to pursue reconciliation.” But has the secular, civil, pro-democracy majority movement represented by the interim government ever promised to reconcile with terrorists?

Secretary of State John Kerry mentions “inclusion” or “inclusive” five times in his August 14 State Department press briefing on Egypt. He is referring to Muslim Brotherhood and Salafis he knows to be the only parties left out from Egypt’s interim government seeking stability and to build democracy. Last year, America restrained from pertinent challenges to Morsi’s unmet commitments and executive overreaches — interferences that would have favored Egypt’s real democracy movement. All of this makes the Obama administration seem nothing more than promoters of the ousted regime and their protesters who gathered armed forces in the streets of Al Adawyia, Cairo and other cities across Egypt.

Fittingly, White House disapproval comes now and blames Egypt’s military for defending the country against the aggression of Morsi defenders and Brotherhood thugs, advising reconciliation which will place Egypt’s democratic future at risk. Ignoring these urgings, the interim government is speaking of combating “religious fascists” and “dissolving the Muslim Brotherhood” as a way of ensuring that democratic values prevail.

U.S. Senator John McCain, America’s best and brightest, labels Egypt’s problem a military coup – in reality, this coup is nonexistent. In cautioning John Kerry against leniency toward Egypt’s military, John McCain says, “… to think they’re [the military coup government of Egypt] going to eliminate the Muslim Brotherhood flies in the face of the history of the Muslim Brotherhood who … will be able to survive, perhaps, underground, despite the efforts of the generals to eliminate them” (Newsmax, 8/15/13). In an open letter to Obama (Newsmax 8/16/13), Free Egyptians reject the arrogance, pessimism and opposition coming from the U.S. in answer to their struggle for freedom in the face of terrorism. Paradoxically, the greatest democracy on earth offers the greatest resistance to Egypt’s democratic goals.

Stressing strong opposition to Egypt’s “return to a State of Emergency law,” the Office of the Press Secretary speaks solely for Egypt’s Muslim Brotherhood — the only body that could possibly benefit from the absence of marshal law as it ravages the country – and in doing so aligns America with jihadists appearing on the U.S. State Department’s list of more than 50 Foreign Terrorist Organizations. Meanwhile law and order is kept by military and police curfews, saving lives and securing the nation against this deadly Brotherhood backlash.

Referring to the Al Adawyia event, the White House said, “The world is watching what is happening in Cairo.” Unlike Morsi’s tight control on Egypt’s media and the tendency to shut out foreign press, the military invited both foreign and Egyptian media to freely witness their handling of Al Adawyia protesters. Patient for weeks (40 days) and under pressure from citizens to remove terrorists from sit-ins blocking their doorways, the army finally arrived to find that the Muslim Brotherhood had been receiving deliveries of suspicious cargo, setting up arbitrary check points to intimidate residents, and receiving mysterious visitors from limousines with diplomatic plates. The military gave notice for protesters to remove themselves from the scene peacefully without fear of harm and gave fair warning that those remaining would be removed by force.

The White House rightfully condemns violence in Egypt and extends condolences to family members of those killed and to the injured from the Al-Adawyia Muslim Brotherhood stage. But it does so at the expense of appearing neglectful and unsympathetic toward the hundreds of murderous attacks on Egypt’s Christians who for the past six years have sought the support and help of a freedom-loving America and still wait. Now suffering more so at the brunt of Brotherhood Muslim madness and unleashed hatred, Christians have so far lost 83 Coptic churches looted and burned by the Muslim Brotherhood, along with Christian schools, shops and businesses.

Al Adawyia of August 14th encapsulates Egypt’s post-Morsi civil strife. All along, the Egyptian military welcomed peaceful Morsi protesters — encouraging calm with hope to avoid bloodshed from a violent, vengeful group very different from the unarmed and nonviolent Tamarud movement protests. Warnings over loud speakers were issued, and many Al Adawyia protesters dispersed, but others (thousands) turned against police and military with Molotov cocktails and machine gun fire killing many (50) police officers and military personnel.

After the Brotherhood-occupied area was cleared, police and military entered the vacated Al Adawyia mosque (which had come under siege and become Brotherhood headquarters) and discovered the macabre — the unthinkable. A mass grave dug into the floor was piled with 30 bodies which forensics later confirmed to be tortured residents set on fire. The mosque was stockpiled with Brotherhood weaponry confiscated by the military.

Mindful of reports that the Muslim Brotherhood intend to create a shadow government and establish its own military like Hamas in Gaza, the army intervened to make certain Al Adawyia could never be the incubator for a state within a state. With good reason to fear an aided and emboldened Muslim Brotherhood, the Egyptian army took action it knew was widely endorsed by Egyptians who have come to expect an army responsible to the pro-freedom majority and its interim government in performing their duty to the country.

Today, amateur videos show Muslim Brotherhood killing other Brotherhood protesters before and during the August 14th attack on military in Al Adawyia and other locations in Egypt. Egyptian hospitals number the day’s dead at just over five hundred– whereas the Muslim Brotherhood reported three thousand losses to Al Jazeera. Muslim Brotherhood propaganda goes far beyond skewing numbers to staging photographs for Al Jazeera with dramatizations of fake injuries made to implicate Egypt’s military and disseminate it across the world. For the U.S., insisting that Egypt’s answer for democracy includes the fraudulent, unscrupulous and untrustworthy Muslim Brotherhood makes the Obama administration look likewise — fraudulent, unscrupulous and untrustworthy — to the smart, genuine and brave freedom fighters of Egypt.