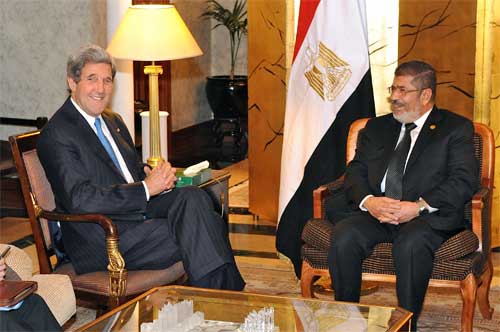 In 2013 we have seen how Western elites increasingly sympathise with the various components of the Islamist Muslim Brotherhood to the detriment of the Liberal Islamic Reform Movement.

In Afghanistan senior Western elite figures are openly talking about negotiating with the Taliban, the group who were regarded as so dangerous that invasion of that country was regarded as an urgent necessity. Furthermore, Western Governments’ approach to the Syrian conflict is to empower the Islamists rather than more secular elements, just as they did previously in places like Egypt.

Actual Western policy suggests that Western policy makers, many of them self-described as progressives, appear to sympathise with the Muslim Brotherhood and act to help its cause, perversely in the name of democracy and tolerance. The views of the Muslim Brotherhood on the subject of women’s rights should alarm such progressives, but probably will not because they are progressive in name only. They will continue to undermine secular elements in both Syria, and Egypt, and will continue to encourage Islamism at home.

The public admission of the Muslim Brotherhoods views on Women’s rights came after the 57th session of the UN Commission on the Status of Women (CSW) that met in March of this year. They were opposed to ratifying the Declaration to End Violence Against Women for the following remarkable reasons (1):

1. Granting girls full sexual freedom, as well as the freedom to decide their own gender and the gender of their partners (ie, choose to have normal or homo- sexual relationships), while raising the age of marriage.

2. Providing contraceptives for adolescent girls and training them to use those, while legalizing abortion to get rid of unwanted pregnancies, in the name of sexual and reproductive rights.

4. Granting equal rights to homosexuals, and providing protection and respect for prostitutes.

5. Giving wives full rights to file legal complaints against husbands accusing them of rape or sexual harassment, obliging competent authorities to deal husbands punishments similar to those prescribed for raping or sexually harassing a stranger.

6. Equal inheritance (between men and women).

7. Replacing guardianship with partnership, and full sharing of roles within the family between men and women such as: spending, child care and home chores.

9. Removing the authority of divorce from husbands and placing it in the hands of judges, and sharing all property after divorce.

10. Cancelling the need for a husband’s consent in matters like: travel, work, or use of contraception.

‘Progressives’ who support the Muslim Brotherhood either directly or indirectly should be thoroughly ashamed of themselves!