First They Came For The Christians… 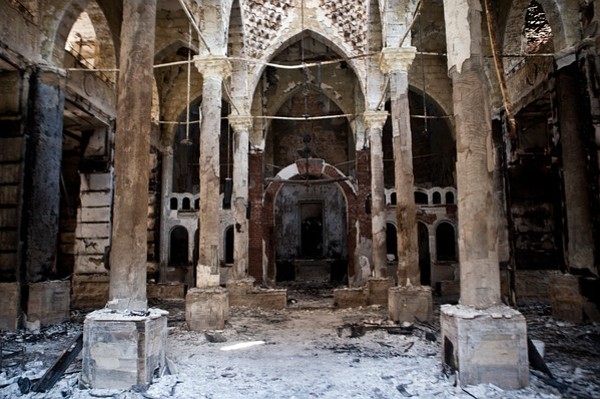 The Amir Tadros Coptic church in Minya, some 250 kilometers south of Cairo, was set ablaze on August 14, 2013. (Getty Images)

Once again, the Council has spoken, the votes have been cast and we have the results for this week’s Watcher’s Council match-up.

“A lie can go halfway around the world before the truth can even put its pants on.” – Mark Twain

This week’s winner, Joshuapundit’s What The Media Won’t Tell You About What’s Really Going On In Egypt, is my look at the context and the reality of what’s occurring in Egypt as opposed to the narrative pushed by the Obama Administration and the legacy media. Here’s a slice:

I wrote yesterday that after doing a great deal to destabilize Egypt, President Obama appeared to finally be doing something right for a change…keeping his mouth shut (at least publicly)and concentrating on his golf game.

I should have known better.

Our Dear Leader took some time off from the links to run his mouth, condemning Egypt’s declaring a state of emergency, saying what he termed ‘traditional cooperation’ could not continue, and announcing the cancellation of planned joint exercises between our military and Egypt’s.

He also got busy behind the scenes to protect his Muslim Brotherhood pals. President Obama reportedly put in a direct call to Egypt’s Defense Minister Gen. Abdel-Fattah El-Sissi, the military leader behind the ousting of Mahmoud Morsi and the Brotherhood.

He undoubtedly planned to threaten him again with losing the $1.5 billion in aid we give Egypt and to demand again that he free Morsi and the other Brotherhood leaders now in custody. Perhaps our Islamist friendly president is worried that a trial of Morsi and the Brotherhood’s Number 2 Khairat el Shater is likely to result in this embarrassing item coming to light.

Al-Sissi refused to take the call.Instead, the president was told politely that the right person for him to speak to was Egypt’s interim president Adly Mansour. Obama recognized the insult when he heard it and decided not to bother talking to Mansour.

There’s a great deal of verbiage in the legacy media calling al-Sissi a ‘Nasser-type figure’. Nothing could be further from the truth. Instead of being a quasi-Marxist, loud mouth Arab fantasist like the Rais, al-Sissi is a quasi-Islamist, pragmatic, career military general who was smart enough to attend war colleges in both the UK and America and has relationships with army figures in both countries.
Having seen what President Obama is like and whom Obama’s in bed with, al-Sissi simply doesn’t trust him. Nor does he perceive any need to.

What’s going on in Egypt is not some kind of Tien-an-min Square but the creation of another front in Islam’s civil war, and it has a direct link to what’s going on right now in Syria.

The Saudis, the Emirates and the other GCE countries wrote off our president a long time ago as a clueless, arrogant and deceptive loser. They realize he’s incapable of dealing with the threat from Shi’ite Iran, Hezbollah and the Muslim Brotherhood, which in Egypt particularly had been cozying up to the Ayatollahs. In spite of their theological differences, the Brotherhood and the Iranians agree on the hatred of the west and the Islamist concept of theocracy, the vilayat e fiqh.

In our non-Council category, the winner was Walter Russel Mead in Via Meadea with Bambi Meets Godzilla in the Middle East, submitted by The Razor. It’s a look at what Mead sees as the reality of Barack Obama’s Middle East strategy and an analysis of it’s failure.

Okay, here are this week’s full results. Only The Mellow Jihadi was unable to vote this week, but was not subject to the usual 2/3 vote penalty: