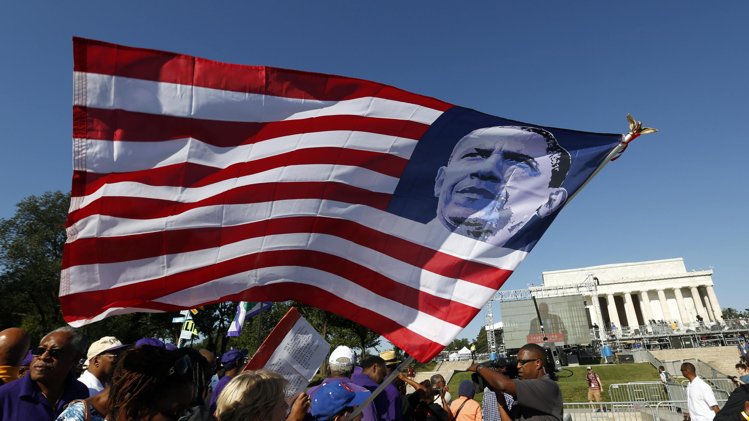 Reuters/The Blaze: A marcher holds a U.S. flag bearing the image of President Barack Obama during the 50th anniversary of the 1963 March on Washington for Jobs and Freedom at the Lincoln Memorial in Washington August 24, 2013.

Knowing that we would wind up here does not take a crystal ball. Many have predicted just this scenario, including myself. War is the ultimate solution of leaders who find themselves in a variety of rock and hard place situations. And Barack Obama has stuffed America in the hardest place of all, sealed us in with nuclear weapons and has lit a very short fuse.

Let’s start with the coming race war that the progressives at home are stoking for all they are worth. You saw the ginned up fiasco of the Zimmerman case where Obama claimed that Trayvon Martin could have been his son and then claimed he actually could have been Trayvon Martin — thereby personalizing the racial conflict out of a non-existent racial confrontation. Then we had the Australian, Chris Lane, being shot in the back while jogging last week by three teenagers – 2 black, one mixed. We had a WWII vet named Shorty (88 years-old) beaten to death with flashlights by 2 young black men in Spokane, Washington. Someone was set on fire in a parking lot in Memphis, Tennessee. A young white boy was savagely beaten on a school bus by several black kids and the list goes on and on. This doesn’t begin to list what has been happening for a while now with black on white crime. All of this can be laid directly at the feet of Barack Obama, Eric Holder, Al Sharpton, Jesse Jackson, Oprah Winfrey and a whole raft of race baiters who have an agenda that envisions race riots in the streets and a new order being born in America.

An employee named Ayo Kimathi, who is the Acquisitions Officer at ICE for the Department of Homeland Security, has a hate-filled, racially motivated site named War on the Horizon that talks about the coming race war. His handle is ‘Irritated Genie.’ The site had to be approved by DHS and the employee has been with the government agency since 2009. He is now on paid leave, which means nothing. It means at some point they will quietly bring this evil race monger back like nothing ever happened. The best part is that this person is the one who ordered ammo and guns for the DHS.

According to reports, this guy is unstable and everyone in the office is afraid of him. He calls President Obama a “treasonous mulatto scum dweller” and rants about whites and their ”effeminization of the black male.”

“The 21st century will either mark the return of Black resistance to white domination or global white-on-Black genocide leading to our complete extinction,” the website declares. “Warfare is eminent, and in order for Black people to survive the 21st century, we are going to have to kill a lot of whites – more than our christian hearts can possibly count.”

On its main page, War on the Horizon says preparing for racial warfare includes “intellectual, spiritual, psychological, and physical preparation for a global clash that will mean the end of white rule on this planet or the end of the Black Race as we know it. ”

And there is a lot more hate on this site to go around:

Under the June 2010 article “Goodbye Uncle Tom,” the website lists Rev. Al Sharpton, a “sadistic political white-sex offender…who advocates ‘homosexuality’ among Black people”; Supreme Court Justice Clarence Thomas and former Secretary of State Colin (spelled “Colon”) Powell who will “indirectly assist in the genocide of Black people; Oprah Winfrey, a “wealthy lesbian mammy” who does “everything in her power to assist whites in destroying strong Black manhood; as well as “all rappers,” “all political homos” and “all promoters and supporters of interracial dating/marriage/sex.”

“We must become militant, hostile, violent, and deadly to those individuals and groups in our community who don’t comply to Black decency and Race First standards. We cannot continue to be Black people with white behavior. – Black Afrikans Only!” the website states. “…Once we have largely purged our Race of its Race traitors, war with our natural enemy, the white Race, will intensify and become the single most powerful motivating force in the lives of Afrikan people worldwide.”

Why would you knowingly have someone like this in a government agency with the responsibility and power this guy had? He has been with them four years and the site was approved — so regardless of what they claim, they knew of his inclinations. I would put forth that this is just the kind of individual they want around — one who is extreme and wants violence. One who hates America in general. The fact that he hates most African Americans as well is just a minor annoyance or a contrivance. This is what we have controlling our country now. We have radical Islamists, black power racists, progressives, Marxists, communists and every imaginable corrupt, evil recruit they can find. America has gone to the dark side and we are fighting in the shade. War is coming to America’s streets and neighborhoods and our leaders are the delivery boys.

On to the war abroad…

By now everyone has heard of the supposed chemical attack by Assad in Syria on his own people. I have seen reports of up to 355 dead with 3600 sickened — many being women and children. If true, that is horrific. But there is serious doubt about it being true. The last reported chemical attack turned out to be false and numerous experts claim this one is too.

I have no love of Assad — he’s an evil man, heading an evil regime. But the rebels are composed of al Qaida and the Muslim Brotherhood and are every bit as evil. Much the same can be said of our current government as well. They want this war; it creates worldwide chaos that they desperately need to reset a looted and plundered monetary system and to reform governments closer to their heart’s desire. I’m not the only one who sees this either. From Michael Rivero:

1. Why would Syria’s Assad invite United Nations chemical weapons inspectors to Syria, then launch a chemical weapons attack against women and children on the very day they arrive, just miles from where they are staying?

2. If Assad were going to use chemical weapons, wouldn’t he use them against the hired mercenary army trying to oust him? What does he gain attacking women and children? Nothing! The gain is all on the side of the US Government desperate to get the war agenda going again.

As I type these words, US trained and equipped forces are already across the border into Syria, and US naval forces are sailing into position to launch a massive cruise missile attack into Syria that will surely kill more Syrians than were claimed to have died in the chemical attack.

And he is right. I would suggest there is a strong possibility here of a set-up and an agenda for a much needed war. I would not put it past Assad to use chemical weapons, but it looks too pat and doesn’t make sense. I have seen on the web many, many pictures of dead children from the chemical attacks playing on the sympathies of the world. This is an old, tried and true technique of garnering sympathy in order to do unspeakable things.

Just to be clear, these are the rebels we are backing — from The Blaze (warning: graphic):

Make no mistake, employing the Doctrine of Responsibility to Protect, we are readying for an attack on Syria. Samantha Power, who missed the last UN meeting, was resting up for the conflict ahead. We are moving our warships closer to Syria in preparation for missile attacks when Obama gives his blessing.

Iran and Syria are warning that if we attack Syria, it will set the whole Middle East on fire. I fear that is true. Should we attack Syria, by proxy, we will be attacking Iran and Russia. Qatar and Saudi Arabia will back the US, but only so far and for so long. Hello all-out World War III. China will either wait to pick up the pieces or back Russia. Obama has gutted and severely weakened our military — a full-scale war will cause a further financial collapse in the US and the odds of us prevailing are very poor. Americans overwhelmingly oppose attacking Syria, not that it matters to our Islamist-in-Chief.

Now Britain and France are beating the war drums along with the US. They believe intervening in the Middle East and setting it on fire will cure the world’s economic woes. They have severely underestimated the Jihadists and the plans that Russia has set in motion. Russia must be over the moon with this because it gives them leeway to further their capture of the Middle Eastern territories for land, power, wealth and resources. And as an added bennie, they think they may rid themselves of the Jews and America. Maybe America, never the Jews. Russia is rising in the Middle East and making alliances in the void of leadership America is leaving behind. Already they have wooed Egypt — China is doing the same thing across the planet. Obama wants this — he can destroy America while credibly denying and blaming others. It’s the progressive way.

This all has the feel of the amateur video used as an excuse for Benghazi — it doesn’t pass the smell test. It’s the same players and the same board. Do you think our leaders really give a crap about 355 people supposedly dead in Syria? Come on! Thousands have died. It is way too convenient an excuse to go to war. So, while we point the finger at Assad and ready for war, Americans are besieged from every side with chaos and evil at home, so much so they don’t know what to do or what to think. Just the way Obama wants it.

If this war unfolds (as it will almost assuredly do), tighten your belts. Forget $10 a gallon gas, you’ll be lucky to get gas. And food? I hope you have some. Please prepare now. Things are about to get very interesting in a bad way. Israel has their finger on the ‘trigger’ and they won’t hesitate to defend themselves. We better get ready to defend ourselves as well. A pale horse brings war at home and abroad.

Update: Note — Michael Rivero’s views are not ones I would normally agree with. It has been brought to my attention that he is a Truther and a propagandist for Iran. I do not know if that is correct, but if it is, those are views I ardently oppose. I stand by his points though in this case – they are legitimate.