A series of studies conducted by researchers at the National Center for Disaster Preparedness show that while 72% of Americans anticipate future terror attacks, fewer than 50% of us have a family emergency plan in place. It is not likely that any of us will forget the images of the families who were affected during the Boston bombing, the Sandy Hook Elementary School shooting, or the Aurora, Colorado, movie theater shooting. 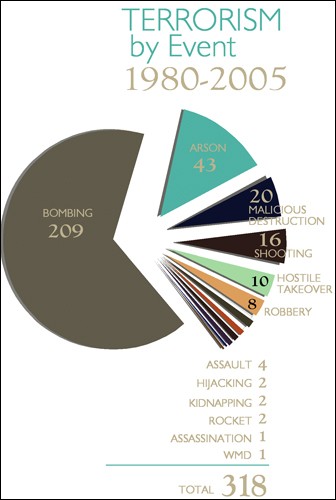 After attacks and incidents such as these, people often wonder how to keep their families safe and ask, “What would I do?” So, if nearly 75% of Americans believe terrorist attacks are inevitable, why are so few American families prepared? The answer may lie in the term “terrorist attack” itself.

While people may consider the shootings at Sandy Hook and Aurora to be terrorist attacks, by definition, they were not. In fact, according to the Federal Bureau of Investigation (FBI), “there is no single, universally accepted, definition of terrorism. Terrorism is defined in the Code of Federal Regulations as ‘the unlawful use of force and violence against persons or property to intimidate or coerce a government, the civilian population, or any segment thereof, in furtherance of political or social objectives.’” It is difficult to be fully prepared for something when it’s not clear exactly what it is that you’re preparing for.

Along with the FBI, the Federal Emergency Management Agency (FEMA) also has provided some general terrorism information:

High-Risk Targets for Acts of Terrorism

The Seven Signs of Terrorism

Fearing future terrorist attacks does not mean that people have to live in fear every day. There are several steps people may take to help prepare and protect their families. One such action is to become familiar with the Seven Signs of Terrorism, developed by the Metropolitan Transportation Authority of New York, that have been adopted by State Police across the country as an educational tool. 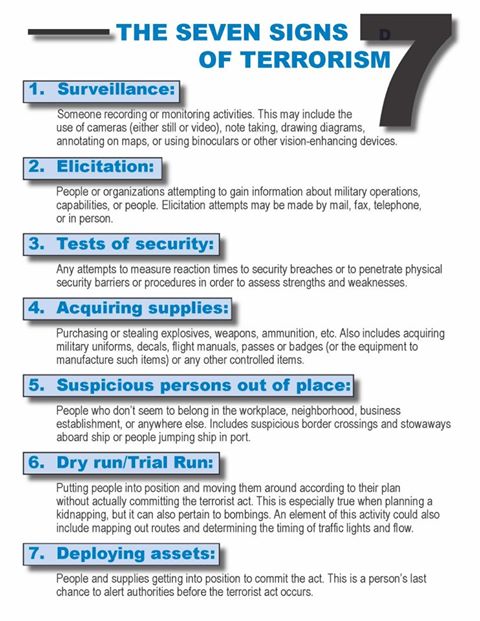 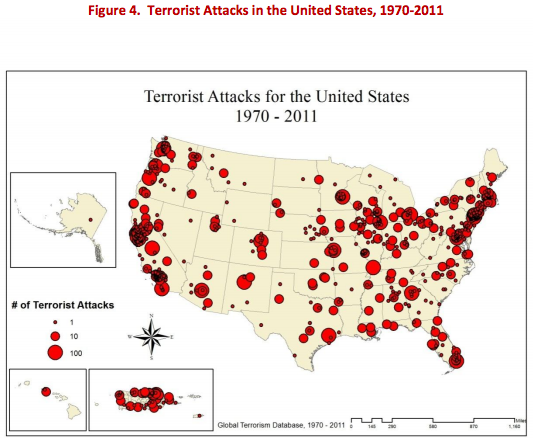 Virtually all state and federal agencies encourage families to take the time to prepare for terrorist attacks. There are three steps to help you get started on protecting your loved ones from acts of terrorism:

Terrorist Attack: In a Public Place

Terrorists typically attack public places with large crowds because they want to cause the most damage and get the most attention for their cause. One of the best ways to keep your family safe from terrorist attacks in public places is to share and discuss the Seven Signs of Terrorism with age-appropriate children.

Image via The National Counterterrorism Center

A simpler way to discuss the signs of terrorism with children is to focus on “Look and Listen.” This approach narrows the Seven Signs of Terrorism to a more kid-friendly version that includes looking for:

Terrorists use explosive devices as one of their most common weapons. According to a report by the National Consortium for the Study of Terrorism and Responses to Terrorism, bombings/explosions account for 51.53% of the tactics used in terrorist attacks in the United States from 1970-2011.

Image via The National Counterterrorism Center

Unfortunately, information for making explosive devices is readily available online and in other information sources, and the materials necessary for making the explosives easily are found in many places. Because of the portable nature of explosive devices and the ease with which they may be detonated from remote locations, terrorists rely on this type of weapon frequently.

One way to keep your family safe from these explosive devices is to know which types of parcels are suspect. Look for parcels that:

Be proactive about checking packages and share the information with your age-appropriate children. They may be responsible for getting your mail after school, or they may love to pick up the boxes left on your stoop during the day, so it is important that they know which types of packages may be unsafe. Of course, if you or your loved ones suspect a parcel for any reason, do not touch it, leave the area, and immediately contact local authorities. It is always best to alert authorities, even if you are unsure whether there is a true danger.

Protective Measures for an Explosion

Because most bombings occur in public places, your family should know what to do in the event of an explosion. As with any emergency drill, parents should practice the following tips with age-appropriate children and discuss what to do in the event of being trapped in or being near the scene of a bombing. Remember, the goal is to empower your children with knowledge, not to frighten them.

If your family is trapped in debris, you should: 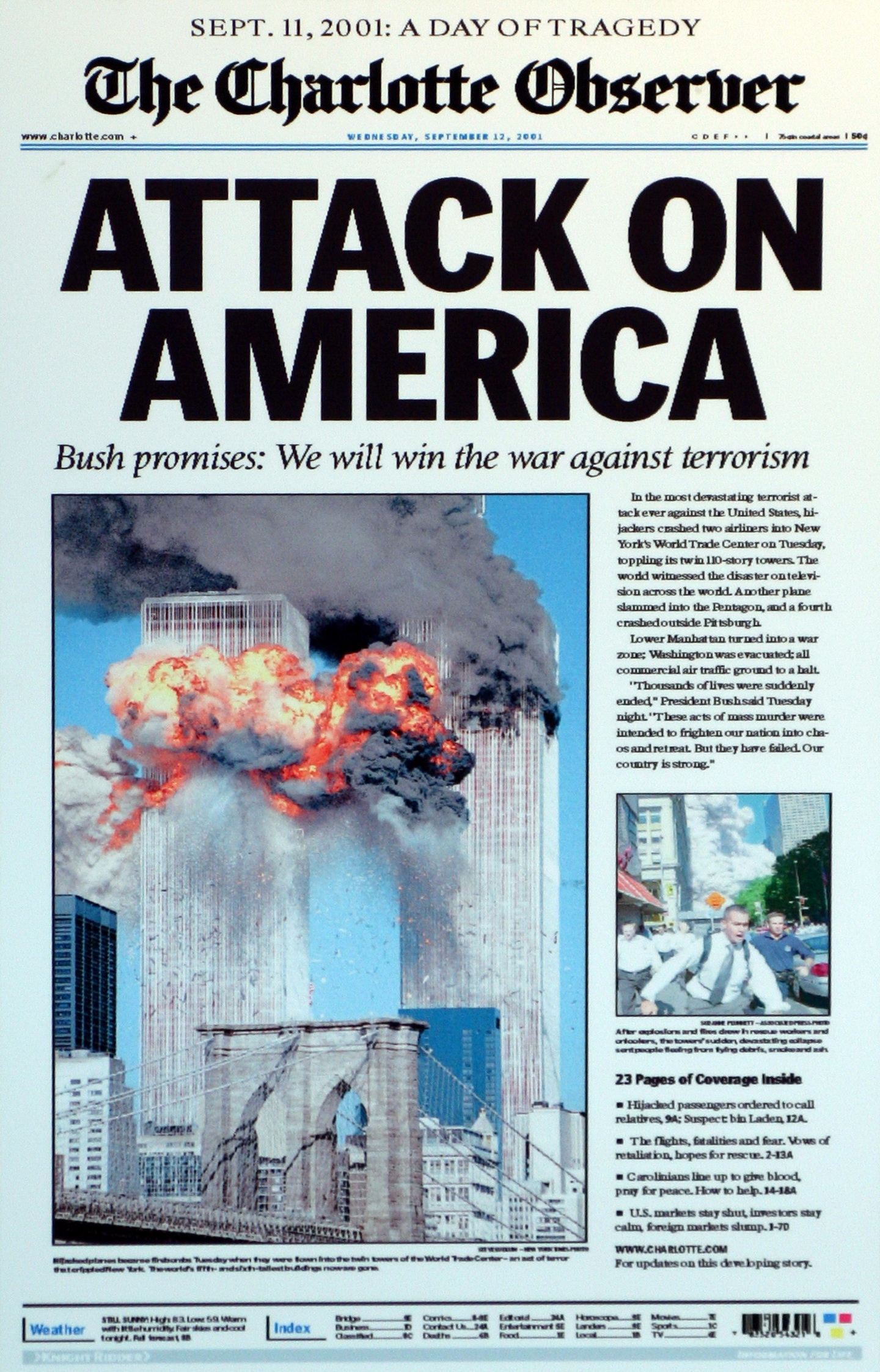 If your family is near the scene of an explosion, you should:

Keeping your family safe from a biological, chemical, or nuclear attack requires more specific preparations, as you may need to remain in your home in the event of one of these attacks. It may be too late to obtain the materials necessary to keep your family safe after one of these types of attacks occurs, so FEMA has created checklists for families to do before these threats arise:

Protecting Yourself, Your Family, and Your Property 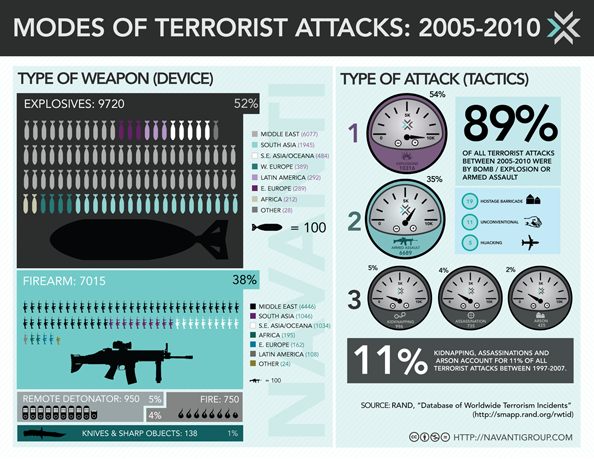 Overall, communication between parents and children is vital to a successful family plan and a positive outcome after a terrorist attack. Families are better equipped to handle a terrorist attack if they discuss scenarios and plans before, during, and after an event so that everyone can ease their worries and fears.

Most importantly, keep in mind that children are sensitive to parents’ emotions and reactions. If parents set a proactive tone for emergency preparedness, children are sure to follow. And, if you are feeling completely overwhelmed by preparing for all of the different types of terrorist attacks, follow the General Guidelines to get started.

General Guidelines for Preparing for a Terrorist Attack

The unfortunate reality is that there have already been numerous terrorist attacks on U.S. soil. And there will be more. With counter-terrorism measures advancing every day, the hope is that our technology is capable of predicting attacks and even halting terrorists in their tracks. Preparing for a terrorist attack, and devising a response plan for various scenarios, is the best way to keep your family safe.