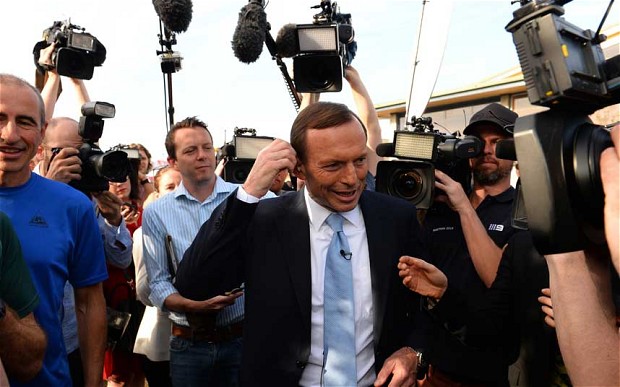 Australian Conservative leader, Tony Abbott, has swept to victory in their elections, effectively booting the Socialists from power. He enters with promises of restoring sanity to Australia’s economy by restoring political stability, cutting taxes and cracking down on asylum seekers arriving by boat. Sigh… Americans pine for an Australian leader. Obama take note — progressivism is out of vogue and Marxists are getting the boot. This is a glimpse into Obama’s future, the Left’s and the Progressives’ on the right side of the aisle. McCain, Graham, Boehner, Cantor and all the other faux Conservatives should begin packing their bags and looking for retirement venues.

From Yahoo! News of Canada:

The election was been pitched as a choice on who is best to lead the A$1.5 trillion ($1.4 trillion) economy as it adjusts to an end to a prolonged mining investment boom, fuelled by China’s demand for its abundant natural resources.

Abbott, 55, built up a strong opinion poll lead on the back of promises to rein in government spending, scrap an unpopular tax on carbon emissions, and stop the flow of refugee boats arriving in Australia’s northwest.

His campaign had support from media magnate Rupert Murdoch and his Australian newspapers, which have urged voters to reject Rudd’s Labor government. Australia’s other major newspaper group Fairfax also called for a change of government, saying

Rudd had painted Abbott’s planned spending cuts as dangerous European-style austerity and said his government was best placed to manage an economy that is slowing but remains the envy of much of the developed world.

A record 1,717 candidates contested the election, including colorful mining entrepreneur Clive Palmer, and Wikileaks founder Julian Assange, who is holed up in the Ecuadorean embassy in London.

Well, it would seem the Australians have had enough of the spending insanity and liberal ‘greenie‘ nonsense. They are also not prone to the American suicidal careening towards the illegal immigrant cliff. True leadership from Down Under, failure from the liberal Yanks. Let’s clean house as the Aussies are doing and reopen America for business.