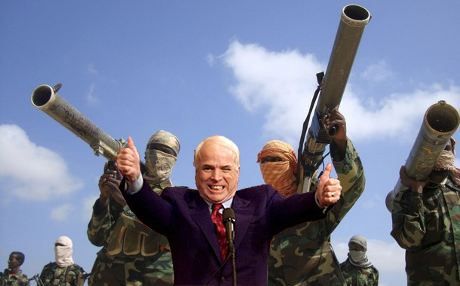 Photo Courtesy of The Right Scoop

Last Friday, a man in Prescott, AZ said what all of us have been thinking and saying — John McCain has morphed into a treasonous lapdog for Barack Obama and is licking the fascist boots of al Qaeda and the Muslim Brotherhood who comprise the barbaric Rebels in the Syrian conflict.

“We the people want you to be representative of the people and for this great nation, but for far too long now on the rest of Congress, including the executive branch of government, along with the judicial and legislative have turned your back on the American people and their core values and principles. I can say with great confidence and speak on behalf of all Americans that your actions against this country are treasonous. All of you — against the will of the American people — have aided and abetted the enemy,” said the town hall attendee.

“You and the rest of Congress, including the president of the United States have went against the will your people in Syria regardless of your position and vote, whether it is a yes or no is still a political smokescreen,” the town hall attendee said to an irritated McCain. “I believe wholeheartedly you do not care about the will and well-being of America or its people. You lied the American people about the chemical attacks in Syria. The American people know that it was our government that is most likely responsible. There is strong evidence, including video, that these attacks were carried out by al Qaeda and you advocate starting a war, even maybe World War, by taking the same attack and blaming it on Assad.”

“You swore an oath to protect us from all enemies, both foreign and domestic,” he said. “The simple irony is that the domestic enemy, now in this country, is the people in government, the Untied States. And McCain, you and the rest of the leaders are accountable for their actions. It is too bad that someone like me is not in office to hold you accountable. Because if I was in a position of power or authority, I would have you all arrested and tried for treason against my country.”

“If you and the rest of this government are truly for the American people and representatives of us, I suggest this time you listen because nobody wants another war or strike in Syria or anywhere else,” he said.

“I am truly disgusted that you people are my leaders,” the man concluded. He was met with a mix of boos and cheers.

An arrogant McCain attempts to dress down this brave man by touting his tenure in AZ and says Americans approve of his performance. No we do not you asshat. You need to go as do all the other progressives in the House and Senate. For the life of me, I do not know why you have stayed in office in Arizona. A large part of my family lives there and I have lived there too. McCain is roundly despised in Arizona. All I can fathom is he is the lesser of offered evils and the progressive political Republican machine on the right is well organized there. The Tea Party needs to boot his sorry butt to the curb. McCain has been under the covers with Obama and the Left for far too long and that he would send our proud military — our sons and daughters, wives and husbands — to be mercenaries for radical Islam is a disgrace.

5 thoughts on “McCain – A Treasonous Enemy Within”