The air quality around our nation’s capitol smelled a lot like exhaust fumes today and the noise level was simply deafening. But the most dramatic effect was the earth shaking from the million or more motorcycles that slowly sped toward town, like an unstoppable army of patriots. Here are the first news reports, not from the left-wing mainstream news media but from the participants, themselves. The bikers’ Facebook page has exploded with over 100,000 likes, almost doubling the number in just two days. Biker clubs from all over America have signed on to participate in the ride and some clubs out West began their trek last week. Take a few minutes and read the comments being posted on the Facebook page. It is simply heartening to read where citizens were helping the bikers with food and lodging and gas as they came through.

Let no one forget what took place on our hallowed soil 12 years ago when 19 devout Muslims culminated their plans to hijack four airliners and fly them into the twin towers of the World Trade Center, the Pentagon and the field in Shanksville, Pennsylvania when the on board passengers decided to retake the aircraft, killing almost 3,000 people. Wikipedia notes the day of infamy with the facts and figures. Read the casualty figures here.

Four passenger airliners were hijacked by 19 al-Qaeda terrorists so they could be flown into buildings in suicide attacks. Two of those planes, American Airlines Flight 11 and United Airlines Flight 175, were crashed into the North and South towers, respectively, of the World Trade Center complex in New York City. Within two hours, both towers collapsed with debris and the resulting fires causing partial or complete collapse of all other buildings in the WTC complex, as well as major damage to ten other large surrounding structures. A third plane, American Airlines Flight 77, was crashed into the Pentagon (the headquarters of the United States Department of Defense), leading to a partial collapse in its western side. The fourth plane, United Airlines Flight 93, was targeted at Washington, D.C., but crashed into a field near Shanksville, Pennsylvania after its passengers tried to overcome the hijackers. In total, almost 3,000 people died in the attacks, including the 227 civilians and 19 hijackers aboard the four planes. It also was the deadliest incident for firefighters in the history of the United States with 343 fatalities.

Today, after hearing that Muslims in America had felt threatened by the fallout from those terrorist attacks that they never bothered to condemn, planned to gather in our nation’s capitol as a Million Muslim March on the day when we honor the victims and first responders of their attack, bikers from across the country decided that enough was enough. For too long our society has been plagued by plots and carnage perpetrated by Muslims who were following the commands of the Prophet to reign terror on non-believers. For too long our leftist news media has been applying their self-imposed rules of political correctness in not even identifying the religion and nationality of these Islamic terrorists. For the last five years that same leftist news media has aided and abetted a Muslim sympathizer named Barack Hussein Obama and has failed to investigate his leanings toward the Muslim Brotherhood, the parent organization behind so many terrorist groups. Now it is time to show the world where true Americans stand. Now is the time to shake up the Capitol with a resounding earthquake of patriot bikers roaring through the streets. 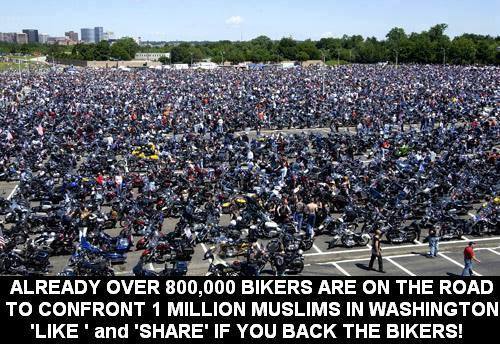 From the English National Resistance Page on Facebook:
https://www.facebook.com/britainfirstparty

AND STILL THEY COME!! ** UPDATE ON BIKERS V ISLAM!!

Authorities confirm that over 800,000 Bikers are now on the road!

From LA they pour out, from New York they fill the roads, the Mid West, like a moving sea of humanity witnesses the Patriot Tsunami as they roll on towards Washington DC!

And still they come, on Harleys on every brand known, the Biker Patriot Army rolls on towards DC in an unstoppable tidal wave of metal, fumes and leather to pay homage and defend the honour of all the people of EVERY nationality who were butchered by Islamists on 9/11.

Not since the Revolutionary War have so many fighting men took to the road in America!

Never have we seen the likes of such a vast citizen army mobilize and deploy in defence of all the free world holds dear and our Governments despise…FREEDOM AND LIBERTY!

Britain First salutes our fellow Patriots in the USA and we ask all our followers to SHARE this post and let the free world see that WE the people can rise…so politicians…BEWARE!!

More updates coming soon. Posting photographs as I find them.

KODAK (WATE) – Thousands of motorcyclists, many of which are from Tennessee, are making their way to Washington, D.C. as part of the 2 Million Biker Ride to honor 9/11 victims.

More than 1,000 bikers from different states met at a staging area Tuesday morning at Smokies Stadium in Kodak.

A 6 News crew is traveling with them on the first leg of the journey to the nation’s capital.

The event was started to counter the 9/11 Million Muslim March in Washington. Those with the “2 Million Biker Ride” say they are doing it to honor victims, families of victims, and soldiers in the war on terror.

“We are supporting those that died on 9/11, and we’re patriots, and a little underlying message to our government: they’re not representing us in the ways they should be representing us,” said participant Bob Buckley.

The estimated 50,000 bikers are set to reach Washington, D.C. on Wednesday.

(From Redstate) NORTH STAFFORD, Va. – Police will close a portion of Interstate 95 tomorrow morning in North Stafford, to allow a group of motorcycles access to the highway from Va. 610.

More in a press release:

At 9 a.m. on [Wednesday], September 11 all lanes on I-95 north at Exit 143 (Rt. 610/Garrisonville) in Stafford County will be closed to traffic for approximately 15 minutes to allow more than 500 motorcyclists to enter the interstate from Route 610 in Stafford County.

The motorcyclist will be traveling north on I-95 to the HOV lanes enroute to the Washington D.C. area.
To avoid delays motorists should use Route 1 north as an alternate route.

Over at Redstate they posted some very useful links to traffic cameras in and around Washington, D.C.

Good morning, everyone. I have a Link to DC traffic cameras to watch the bikers live when they roll into DC tomorrow.
Here’s a second link for DC area webcams.

Redstate also has a couple of great videos of groups of bikers departing Athens, GA, Grandview, MO and Bethel, CT. Click the links to view them.

Herald Mail, Hagerstown, MD
A group of 2,000 bikers coming from Cumberland, Md., was scheduled to stop for fuel in Hagerstown at 6:30 a.m. The group was expected to get off at Exit 29 on I-70 to Sharpsburg Pike and meet with various members of the Pride Motorcycle Club, which is composed of current and retired correctional employees, with 26 chapters across Pennsylvania, Maryland, Wisconsin and Kentucky, said Frank Kronawetter, president of the Hagerstown chapter.