Gulag Bound
By: as Dawn sees it

One cannot help but point out the unwavering bias this administration seems to have in regards to Syria and its support of the anti-Assad rebels.

March 19 2013 a chemical weapons attack was launched by the anti-Assad rebels outside Aleppo in Syria. A UN chemical weapons team was invited in by the Syrian government, for an inspection. The fact that the government invited them in for an inspection should say something, but in a day and age when common sense seems to be lacking, and facts are distorted by this administration and a complicit MSM, it can be hard to find the truth, unless of course you are seeking out alternative media.

One can certainly see why Diane Feinstein seems to take issue with alternative media, I think what she is saying is she would like Government controlled media. The kind of media that wants their viewers to react on emotion rather than actually facts and logic.

The samples taken from the impact site of the gas-laden projectile were analyzed at a Russian laboratory certified by the Organization for the Prohibition of Chemical Weapons, Churkin said.

The ambassador said the results of the analysis indicate the Bashar 3 rocket “was not industrially manufactured and was filled with sarin.” He said the samples indicated the sarin and the projectile were produced in “cottage industry” conditions.

The absence of chemical stabilizers, which are needed for long-term storage and later use, indicated its “possibly recent production,” Churkin said.

“Therefore, there is every reason to believe that it was the armed opposition fighters who used the chemical weapons in Khan al-Assal,” Churkin said.

So let me get this straight, a red line would have to be drawn if Assad uses chemical weapons but not if anti-Assad forces used chemical weapons? From Reuters’ “UN Has Testimony that Syrian Rebels Used Sarin Gas,” May 5:

President Barack Obama last year declared that the use or deployment of chemical weapons by Assad would cross a “red line.”

He then sent arms and ammunition to the opposition on “high confidence” that it was Bashar Assad forces that used the sarin gas — when all the evidence points to the contrary. Back to the CBS report:

President Barack Obama’s government says it has “high confidence” that Syrian President Bashar Assad’s forces have killed up to 150 people with sarin gas. The use of a chemical weapon crosses Obama’s “red line” for escalating U.S. involvement in the conflict and prompted the decision to send arms and ammunition to the opposition, not just humanitarian aid and non-lethal material like armored vests and night goggles.

Common sense, facts, and logic should tell us which side this administration is supporting. 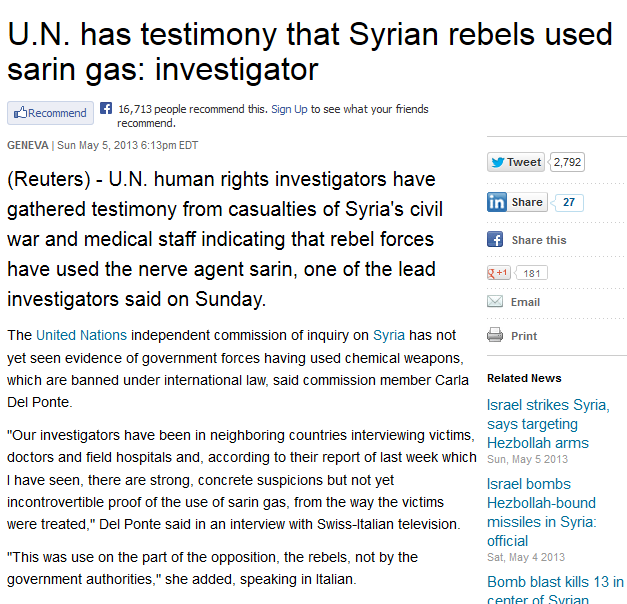