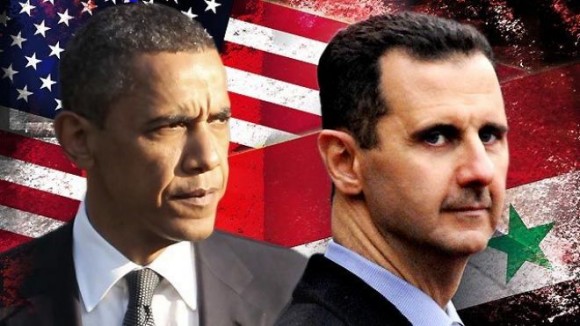 In his interview with Charlie Rose, Syrian President Bashar Al-Assad said there was “not a single shred of evidence” that his regime used chemical weapons. During his Tuesday night speech to the nation, Obama offered none. As the Associated Press noted, “President Barack Obama voiced his conviction Tuesday night that Syrian President Bashar Assad was to blame for deadly chemical attacks against civilians, but again he offered no proof.”

Assad said the Obama Administration “doesn’t have” the evidence. “If they had it, they would have presented it to you as media from the first day,” he said.

Jake Tapper on CNN said, “I don’t like agreeing with Assad, but he’s right. The American people have seen no evidence tying the chemical weapons attack directly to Assad.”

Charlie Rose said to Assad: “…some have suggested that it [U.S. military strikes] might tip the balance in the favor of the rebels and lead to the overthrow of your government.” Assad replied, “Exactly. Any strike will be as direct support to al-Qaeda offshoot that’s called al-Nusra, Jabhat al-Nusra and the Islamic state of Iraq and Syria. You’re right about this. It’s going to be direct support.”

Obama acknowledged on Tuesday that, “It’s true that some of Assad’s opponents are extremists,” but went on to claim that “…al Qaeda will only draw strength in a more chaotic Syria if people there see the world doing nothing to prevent innocent civilians from being gassed to death.”

He was careful not to explicitly admit that these “extremists” include al Qaeda and that his policy was designed to benefit them.

A new report, “Jihadist Terrorism: A Threat Assessment,” points out that al Qaeda in Syria “is focused on overthrowing the Assad regime” and that it is “able to garner considerable support from Syria’s Sunni population…” It is not motivated by alleged chemical weapons attacks and a “chaotic” situation in the country, as Obama claimed.

In fact, investigative journalist Ken Timmerman reports that the evidence actually shows the rebels were behind the attacks. He says, “…intelligence reports from French and Jordanian military intelligence show that the jihadist al-Nusra front rebels acquired similar rockets and chemical agents earlier this year when they overran a chemical weapons depot in Aleppo on May 17 and captured a rocket unit in Daraa not long afterward, sources privy to the intelligence tell me.”

He adds, “Those intelligence reports concluded there was a strong likelihood the rebels had carried out the Aug. 21 chemical weapons attacks either deliberately or by accident.”

Former CIA officer Larry Johnson reports, “My friends in the CIA are still around and they are now warning me that both the United States and the United Kingdom know that Bashar Assad is not responsible for the incident on 21 August that killed and maimed Syrian civilians. While it is true that a chemical of some sort caused the fatalities and injuries, it was not the result of an attack by the Syrian Army using military quality chemical weapons from the Syrian arsenal. The CIA knows that this is the case yet, with John Brennan at the head of the Agency, is deliberately lying and misleading members of Congress, the media and the public.”

Obama said on Tuesday, “So even though I possess the authority to order military strikes, I believed it was right, in the absence of a direct or imminent threat to our security, to take this debate to Congress.”

But since the War Powers Act actually prohibits military action unless there is a direct or imminent threat to the U.S., Obama does not have the authority he claims.

Obama had previously told PBS, in regard to justifying a military strike on Syria, that chemical weapons “can have devastating effects [which] could be directed at us. And we want to make sure that that does not happen.”

On Tuesday, however, Obama did not raise that concern. Instead, he said: “The Assad regime does not have the ability to seriously threaten our military. Any other retaliation they might seek is in line with threats that we face every day.”

Obama also said on Tuesday that “The Assad regime has now admitted that it has these weapons, and even said they’d join the Chemical Weapons Convention, which prohibits their use.” The implication was that Obama’s threats forced the Syrians to make that admission.

In fact, Syria admitted having these weapons over a year ago, and pledged not to use them in the civil war. Syria’s then-Foreign Ministry spokesman, Jihad Makdissi, told reporters, “Any stock of WMD or unconventional weapons that the Syrian Army possesses will never, never be used against the Syrian people or civilians during this crisis, under any circumstances.”

Obama isn’t the only liar in this unfolding debacle. The rebels are also spewing out disinformation.

On Monday night Najib Ghadban, a representative of the National Coalition Of Syrian Revolution and Opposition Forces, appeared on The Lead with Jake Tapper and claimed that 120,000 Syrians have been “killed by this regime.” In fact, 43 percent of the fatalities are said to be pro-government combatants.

Tapper said Ghadban “meets regularly with the White House, National Security Council and State Department.” He is an associate professor of political science and Middle East studies at the University of Arkansas. His bio says, “He has contributed political commentaries to several U.S., European, and Middle East media outlets, including Al Jazeera.”