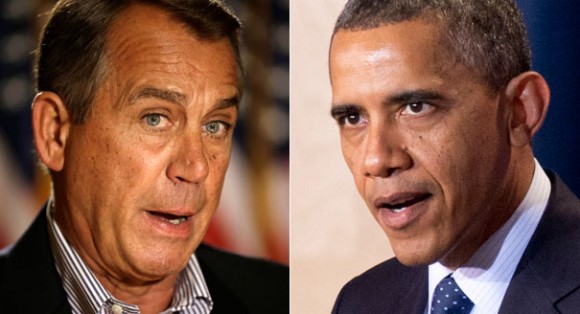 Informed speculation mounted at Monday’s Accuracy in Media conference, which officially launched the Citizens’ Commission on Benghazi, that House Speaker John Boehner’s opposition to a Watergate-style congressional committee to investigate Benghazi stems from his knowledge of arms shipments to al-Qaeda terrorists in Libya and Syria.

The al-Qaeda terrorist attack on the American diplomatic mission at Benghazi, in Libya, on September 11, 2012, resulted in the deaths of four Americans, who were left to die, rather than be rescued, and has been called by some the “Benghazi Betrayal.”

Coming just eight weeks before the 2012 presidential election, the Obama administration falsely blamed the attack on a spontaneous reaction to a video critical of Islam, rather than blaming it on al Qaeda.

Charles Woods spoke with emotion at the AIM conference about the loss of his son and asked for people not only to press for answers as to what really happened at Benghazi, but to pray for the country.

Christopher Farrell, Director of Investigations and Research for Judicial Watch, said at the conference that Obama’s lies and distortions about the attack are designed to obscure the central truth that the administration was arming al Qaeda.

“That’s what they don’t want broadcast or printed anywhere,” he said.

As incredible as it sounds, former CIA officer Clare Lopez said support for al Qaeda, the Muslim Brotherhood, and other Islamists groups has become the official foreign policy of the United States under Obama. She said the policy has been on display in Libya, Egypt, Syria, and the United Nations, through the Organization of Islamic Cooperation.

House Speaker John Boehner (R-OH) says about Benghazi: “For the past year, this administration has failed to provide sufficient answers, fully comply with subpoenas, and make available relevant individuals to provide testimony. In short, this administration hasn’t been upfront with the American people or this Congress. Republicans will not stop until we get to the truth. We will press forward with our investigation until we have answers, full accountability, and justice.”

However, he opposes the proposal (H.Res. 36) to create a bipartisan House Select Committee to fully investigate the attack and the cover-up. Introduced by Rep. Frank Wolf (R-VA), the proposal has 175 co-sponsors.

Several speakers at the CCB conference agreed that being exposed as knowledgeable about the Obama administration’s secret operations in advance of the Benghazi disaster could be extremely embarrassing to House Speaker Boehner and may explain his opposition to Rep. Wolf’s legislative proposal.

Boehner is a member of the so-called “gang of eight” in Congress, members secretly briefed by the administration on top-secret intelligence operations.

Investigative journalist Kenneth Timmerman, who is writing a book on Benghazi, said, “Did they get briefed? Were they briefed on this arms trafficking operation out of Benghazi to the Syrian rebels or were they not briefed? And if they were briefed, is that perhaps a reason why they don’t want a special committee, because in fact they knew about this operation and did nothing to stop it?”

Rep. Wolf spoke to the conference and encouraged the Citizens’ Commission on Benghazi, under the direction of AIM Editor Roger Aronoff, to get to the bottom of what happened. Members of this commission spoke at the all-day affair and vowed to continue to press for answers from the administration and Speaker Boehner.

Larry Ward, political director of Special Operations Speaks, engaged in an exchange with Rep. Wolf about whether a discharge petition introduced by Rep. Steve Stockman (R-TX) is needed to force a vote on Wolf’s H.Res. 36. Ward doubted that Boehner would ever agree to the creation of a special panel to investigate Benghazi.

“If four members of Obama’s personal staff had been killed there would rightfully have been a full investigation and congressional hearings. But not one perpetrator has been brought to justice and requests for witnesses and information have been blocked,” Stockman has said.

Timmerman told Wolf that he had been informed by a member of the Republican Party in the House that Boehner has twice refused to say, when questioned about it, whether he was briefed on arms smuggling through Benghazi into Syria.

Wolf said he didn’t know whether Boehner was briefed or not and whether that would be a reason for his opposition to H.Res. 36. “But it really shouldn’t be a reason,” he said.

While the destination of the weapons is a legitimate concern, Wolf said, “most of what we have been trying to find out” goes beyond those matters and involves questions such as who in the administration gave the order to “stand down” and not rescue the Americans under fire from the terrorists. After the attack, Obama flew off to Las Vegas for a political fundraiser.

Another key question, Wolf said, is why the false cover story of the video causing the attack at Benghazi was repeatedly disseminated by the administration, including by Obama himself in a speech to the U.N.

Asked to comment on the possibility that “blackmail material,” as a result of being briefed on the Benghazi operations, could be used against Boehner, Wolf said, “I’m not going to comment on that. I don’t know that. That’s why I’m glad you’re looking at it. That’s why we need a select committee.”

Former CIA officer Kevin Shipp, another speaker at the conference, said it was clear to him that Boehner was “in on it” and is protecting the Obama administration from a major scandal involving potential violations of domestic and international law.

“What an ingenious trap,” Shipp said. “Come here, gang of eight, come here Mr. Boehner. Let me brief you on a program that we think is really going to be something. And they brief them and get their approval and they don’t understand the full scope of what the operation is doing. And then they find out later and it’s like, ‘oh, oh.’ They don’t want this coming out either.”

He added, “Why would Boehner not want this [the select committee] to happen, unless there was some personal or political damage that he will suffer if it does come out?”

Retired Major General Paul E. Vallely told this writer in an interview that he hopes that Boehner “hasn’t been compromised in some way” by the Obama administration because of his reported knowledge of arms transfers through Benghazi.

Another speaker, Retired Admiral James Lyons, said he believes arms smuggling to al Qaeda is an impeachable offense, and that Benghazi may have been part of a larger plot involving the Muslim Brotherhood and the planned release of Sheikh Omar Abdel-Rahman, known in the United States as “The Blind Sheikh,” from U.S. prison. As part of this alleged conspiracy, Lyons said, U.S. Ambassador to Libya Christopher Stevens was supposed to have been kidnapped, not killed, and then exchanged for Abdel-Rahman, the terrorist mastermind behind the World Trade Center 1993 bombings.

Although most of the speakers wanted to focus on Benghazi exclusively, the subject of Syria kept coming up, as the weapons shipments at the center of the scandal were described as moving into Syria, with the support of such countries as Saudi Arabia, Turkey and Qatar.

In Syria, Timmerman said, the same policy of arming al Qaeda is on display. Obama is arming “the worst of the worst” among the terrorist groups, he said.

He also said he was told by a senior Republican member of Congress who examined the administration’s “intelligence” about an alleged chemical weapons attack by the Assad regime, that it was “manufactured” data, and that U.S. military intelligence agencies had not accepted the claims. The intelligence was “doctored,” he said.

Despite accepting the Russian proposal to dismantle Assad’s chemical weapons program, Obama has not ruled out using military force against Syria.

Timmerman said Christians in Syria fear the overthrow of the Assad regime—which is repressive but at least respects their religious liberties—while another regime might result in their being slaughtered by the jihadists supported by Obama.