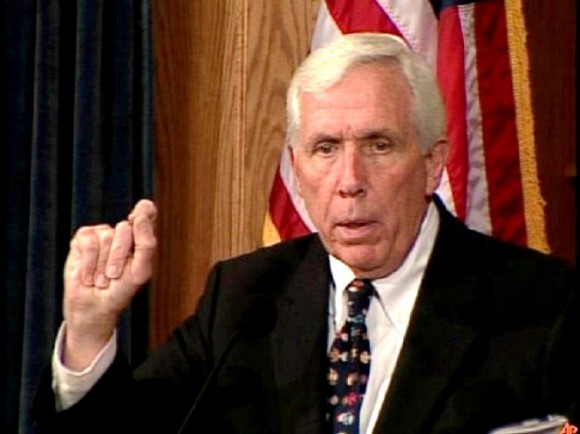 The Obama administration has been supporting jihadists and the Muslim Brotherhood abroad, thereby furthering the goals of Islamists in the Middle East, argued several speakers at Accuracy in Media’s Citizens’ Commission on Benghazi (CCB) conference last week. Why is this important to the exploration of what happened in Benghazi on September 11, 2012? First of all, it provides context for the terrible conditions that Ambassador Stevens faced when he traveled there that September, and the make-up of those who attacked our facilities there. It could also partially explain the administration’s eagerness to falsely blame the attack on a YouTube video that Muslims found offensive, rather than acknowledge poor security conditions and a growing al-Qaeda movement in the region. After all, the President believes that core al Qaeda is on the run.

“Here’s the sentence, here’s the headline, that the Obama administration does not want broadcast anywhere or printed anywhere: ‘Obama Administration Arms Al Qaeda,’” Chris Farrell, Director of Research and Investigation at Judicial Watch, said at the conference. “That’s it, right there.”

Judicial Watch is the only organization litigating in Federal Court on Benghazi to date. It recently issued a new report, the second of two, on the Benghazi attacks and the Administration’s subsequent stonewalling.

“Look, this attack in Benghazi did not happen in a vacuum. It wasn’t a fluke. It didn’t just occur,” argued author and investigative journalist Ken Timmerman. “It was a policy shift that took place as soon as Obama took power to overturn our longstanding national security alliances in the Middle East and to support the Muslim Brotherhood.”

“I think the path, I think the green light, if you will, even, was given by President Obama in his 2009 speech in Cairo, Egypt, when he green-lighted the Islamic uprising that would follow over the next two years,” said Clare Lopez, a senior fellow at the Center for Security Policy. Lopez is a former CIA operations officer and a member of the Citizens’ Commission on Benghazi. “What happened in Libya was a follow-on to that green light, as well as what happened in Egypt, where the Muslim Brotherhood rose up and seized power for a time.”

During the aforementioned Cairo speech, noted Timmerman, “sitting behind the President of the United States as he’s giving the speech, so they’re pictured in all of the news footage of it, are top members of the Muslim Brotherhood—at that point still an outlawed group although tolerated by the Mubarak regime.” Hosni Mubarak, the president of Egypt at that time, was not invited. This sends a clear message from our President.

As for Muammar Qaddafi, he was a brutal dictator, but “He had al-Qaeda jihadis in his jails,” said Lopez. “And yet, in March of 2011, the United States, together with NATO allies Italy, France, and others, decided to intervene in Libya. Why? To assist al Qaeda militias to overthrow a sovereign government that was no threat to the United States.” Those skeptical of the al Qaeda connections to Libya Shield, Ansar al Sharia, the Libyan Islamic Fighting Group (LIFG), and other Libyan “liberation” freedom fighters should read John Rosenthal’s The Jihadist Plot, which details al Qaeda’s intricate plan to overthrow the apostate Qaddafi.

“As we know, we’ve had step-by-step accounts of the killing of Osama bin Laden, and some information that was probably classified,” noted Kevin Shipp, a former CIA officer and author of From the Company of Shadows, at the conference. “We’ve had step-by-step accounts of what’s going on in Syria, with the exceptions of some things about the gas. We’ve been given nothing about Benghazi. No, not even the smallest detail regarding what happened that evening.”

The reason we’ve been given step-by-step accounts of Osama bin Laden’s death is partially because it helped the President politically. Similarly, knowledge of Syria’s conflict assisted the President in making the case to send military and non-military aid. But Benghazi, where four people died? President Obama would rather that issue be swept under the rug.

Members of the Commission expressed their dismay that the administration did not mount a more vigorous attempt to rescue the Benghazi four, and that, they argue, stand down orders were given.

“If the President’s child were in Benghazi, would the rescue attempt have been more aggressive?” asked Charles Woods, the father of Tyrone Woods, at the conference. Tyrone Woods was one of two former Navy SEALs who, along with Ambassador Chris Stevens and information officer Sean Smith, was killed that day in Benghazi. Charles Woods asked the same question at a hearing before Darrell Issa’s (R-CA) committee three days later. At the hearing, Rep. Issa announced that he had subpoenaed two Diplomatic Security agents who were on the ground in Benghazi that night. He said that the State Department had suggested to him that these two might not want to come forward because there was an FBI investigation ongoing.

Rep. Frank Wolf (R-VA), who also spoke at the conference, noted that those involved were consistently politicizing the FBI investigation by using it as an excuse to not provide information.

The Commission is dedicated to finding out the truth behind the Benghazi attacks, and this work is ongoing. Captain Larry Bailey (Ret.) invited confidential sources to contact him and be assured of total privacy and anonymity. Videos and transcripts from the September 16th conference are being posted at the CCB website.

Bethany Stotts is a freelance writer, and former staff writer for Accuracy in Academia. She blogs at http://bethanystotts.wordpress.com/.