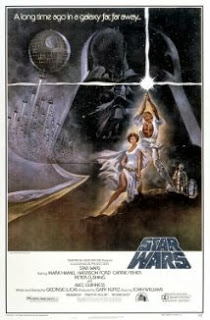 Movie fans hold onto images and lines; take for example the original Star Wars: Episode IV – A New Hope, the scene where Obi-Wan and Luke Skywalker are gallivanting their way across the cosmos and all of the sudden Obi-Wan reacts after the planet of Alderaan had just been destroyed by the Evil Empire’s Death Star. Luke asked what’s wrong, observing the changed countenance on his mentor.

“I felt a great disturbance in the Force, as if millions of voices suddenly cried out in terror and were suddenly silenced. I fear something terrible has happened.”

If you look at movies, not so much for their entertainment value; but as morality plays intended to bring social issues before the public, then Star Wars is a classic good v evil, underdog v brute force with long odds against coming out on top. Maybe that’s why it was so successful; folks pinned their hopes on good winning out in the end. 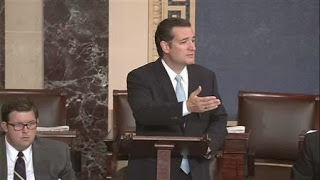 When I started writing this article it was originally titled, Senator Ted Cruz – A Disturbance in the Force; but the more I thought about his role in the morality play staged in Washington as he filibustered against ObamaCare the more he came across as a Luke Skywalker with the evil empire being represented by a full compliment of loyal Democrats and a few treacherous back stabbing Republicans.

Imagine Harry Reid covered head to toe in black, (actually it isn’t that hard to imagine) sitting around the conference table with an assortment of socialist Senators listening to the explanation of how the old Republic had been swept away?

“I’ve just received word that the opposition has been dissolved permanently… We’ll get cloture on this bill and send it back to Congress stripped of any reference to de-fund ObamaCare.”

“What of the rebellion?” One of them speaks out without regard for the power of the Force.

“The public is aware of how bad ObamaCare is, how it’s killing the economy, making businesses downsize or shorten 40 hours work weeks below 29 hours in order to avoid penalties…”, pausing for a moment, “They have the entire bill, over 2000 pages which we never bothered to read before passing it. The rebels might find a weakness…”

“Enough…Fear will keep the locals in line, fear of this battle station”

“The plans you refer to will soon be back in our hands.” Reid’s voice grumbles out from the voice box attached to his throat.

“Don’t try to frighten us with your sorcerer’s ways…”

“I find your lack of faith disturbing…” Off to the side you see an invisible hand crushing the throat of John Boehner on the other side of the conference table.

Witnessing the Senate’s lack of respect for We The People and our constitutional republic, it’s refreshing to have the junior Senator from Texas, Ted Cruz, rise to the occasion, light saber in hand and willing to stand up to the evil empire. 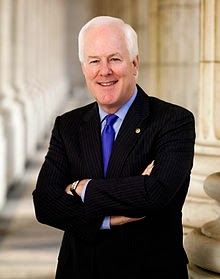 Another movie came to mind, Mr. Smith Goes to Washington; if for no other reason than to contrast Ted Cruz standing up for a righteous cause while Senior Texas Senator, John Cornyn played the part of his back stabbing mentor. When John Cornyn says he’s got your back, be warned, he’s got a knife hidden in the other hand waiting for the opportunity to break it off in you.

I doubt we’ll see John Cornyn bolt from the Senate floor as his conscience eats away at him, attempt to shoot himself out of guilt or beg forgiveness in front of the entire Senate for having sold his soul to the Obama administration and the socialist cause of single payer medical coverage. That won’t happen, remember, this is reality and not the movies.

Tomorrow when the sun comes up we’ll read about how Congress is working on a way to iron out their differences with the newly amended Senate legislation, legislation which no longer contains any reference to ObamaCare.

The media will spin the story to make it appear as if conservatives are intent of shutting down government, making old people starve when their Social Security checks will need to be held back until additional funds are approved and the debt limit raised once more. Our fighting men might run out of ammunition on the front lines and little children will be found running half naked through rat infested alleys looking in trash cans for anything to cover their feet.

Obi-Wan would wake up from a sound sleep and say, as ObamaCare is eventually implemented in full, “I felt a great disturbance in the Force, as if millions of voices suddenly cried out in terror and were suddenly silenced. I fear something terrible has happened.”

Ted Cruz, Jedi Knight/Senator has his work cut out for him, singing to the choir which has no intention of listening along with a news media more than willing to print up his obituary might deter some folks; but I’ve a feeling Ted Cruz really does have a kindred spirit in Luke Skywalker, something to give us all a new hope.