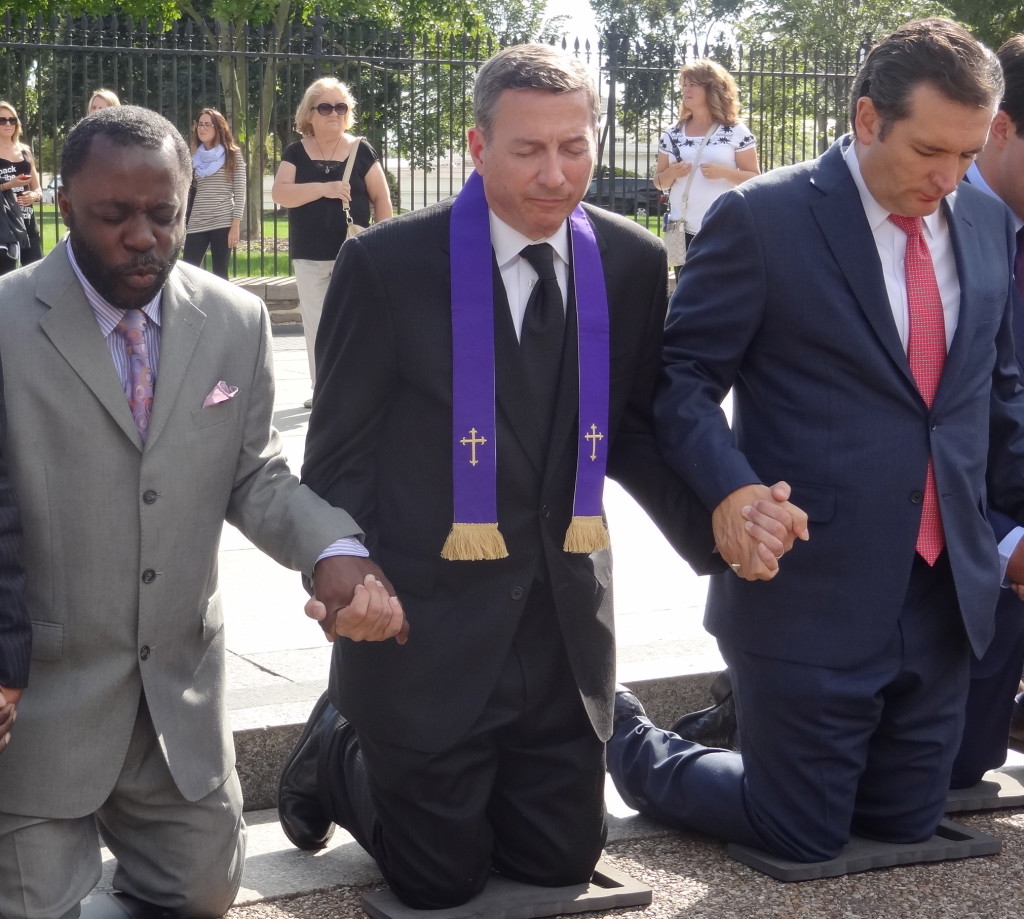 CBN News: Ted Cruz alongside Rev. Rob Schenck (from Faith and Action) and Rev. Frazier White (a Democrat and Obama supporter) praying for Saeed Abedini, who has been in an Iranian prison for one year. He is being persecuted for his faith in Jesus Christ.

This week, I had the honor and privilege of meeting one of my closest friends for the first time face to face — Trevor Loudon. We have worked together for years now on his first two books and will work together on many more. The next three years, with the ensuing two election cycles, will be the most grueling and crucial battles Americans have ever faced. Trevor Loudon is a patriot who has tirelessly fought for our freedoms from coast to coast. Both of us will fight until we can fight no more. Make sure you get a copy of Trevor’s latest book: “The Enemies Within: Communists, Socialists and Progressives in the U.S. Congress.” Trevor exposes the underbelly of American politics and the Marxist infiltration that has brought us to the brink of disaster. Listen to a very wise Kiwi speaking in Oklahoma:

We want the Progressives on the Right to know that your exposure is next. We will be thoroughly researching and documenting you. As this last week has shown, there are quite a few who have betrayed America and what the Conservative majority expected of them on Obamacare. Let’s name names:

In turn, we want to thank those that took a principled stand: Senators Vitter, Paul, Crapo, Enzi, Fischer, Roberts, Scott, Heller, Grassley, Toomey, Moran, Rubio, Shelby, Risch, Inhofe, Portman, and Sessions for standing with Cruz and Lee. We will remember what you did when the crunch came. Count on it.

As Sarah Palin said, 2014 is right around the corner:

Americans are getting slammed by Obamacare right now. Workforces are decimated as health care prices rise. Public opinion is on our side. If now was not the time to unite and fight it, when was? Those who are attacking Cruz and Lee’s efforts have forgotten how negotiations are won.

Use as an example the negotiations a governor of energy-rich Alaska must engage in with powerful multinational oil tycoons. In my experience, I found that the key to achieving success for the people you’re elected to serve is to take a firm position, stand solid, and negotiate from there when the other guy is ready to take you seriously. You fight as hard as you can with whatever small edge you’ve got until the other guy respects you enough to wise up, sit down, and come to a mutually acceptable agreement. You get nothing at all if you preemptively surrender before the battle even commences.

Imagine how much stronger the GOP’s hand would have been if every Republican (and those Democrats who’ve finally admitted Obamacare’s devastating flaws) stood together against cloture in order to prevent Harry Reid from cutting off debate and stripping Obamacare defunding from the bill?

Not only would there have been pressure on red state Democrats up for re-election to join the right cause, there would have been pressure on Reid and the White House to negotiate agreements. Even if the GOP couldn’t have defunded all of Obamacare, they could have negotiated some relief for average Americans who now feel they can do nothing but brace for the coming train wreck. We average Americans know we’ll never get the exemptions and favors Obama gave his political cronies and Congress, but any relief for the middle class would have been welcomed.

But Republicans got nothing from squabbling with each other and denouncing (on and off the record) the brave men who tried to do something.

How right she is. As the GOP looks towards its next steps on the debt ceiling and the faux dance of shutting down the government, patriots are watching — closely. We haven’t given up, gotten bored and walked away. Much as the Progressives on both sides of the aisle would like, we are still here and still fighting.

The attacks on Ted Cruz and the Tea Party are intensifying — from the Right and the Left — witness the likes of Peter King, John McCain and Tom Harkin:

As the clock ticks down toward a possible government shutdown, Sen. Tom Harkin, D-Iowa, isn’t holding back.

On the Senate floor before 10 a.m. Friday, the senator gave a speech describing how American politics have reached the level at which “a small group of willful men and women who have a certain ideology”—read: the tea party and Sen. Ted Cruz, R-Texas—have been able to take over the congressional budget debate in the last week. “Since they can’t get their way,” Harkin said, “they’re going to create this confusion and discourse and hope that the public will be so mixed up in who is to blame for this, that they’ll blame both sides.”

It’s dangerous. It’s very dangerous. I believe, Mr. President, we are at one of the most dangerous points in our history right now. Every bit as dangerous as the break-up of the Union before the Civil War.

This isn’t the first time the senator has spoken out about the spiraling budget and the fight over Obamacare. Harkin suggested Thursday that Cruz looked “foolish” for his “little tirade” that lasted from Tuesday afternoon until Wednesday morning. Harkin called out Cruz as being part of “the most extreme tea-party wing” of his party, and for his “ideology-driven obstructionism.”

I respectively suggest that Senator Harkin stuff it.

Between being bought off, corrupt or just plain spineless, the RINOs attacking Cruz are disgusting. Their defeatist, roll-over-and-wet-yourself leadership is sickening. I loved a quote from Cruz during the filibuster; he hearkened back to Nazi Germany for those who have declared that Obamacare could not be defeated:

If we go to the 1940s, Nazi Germany—look, we saw it in Britain. Neville Chamberlain told the British people: Accept the Nazis. Yes, they will dominate the continent of Europe, but that is not our problem. Let’s appease them. Why? Because it can’t be done. We cannot possibly stand against them.

Trevor Loudon came up with a brilliant idea of envisioning a Cruz Coalition. He floated the idea in Oklahoma and it was met with thunderous applause. Consider the following Conservative Dream Team:

These are just suggestions. Every Conservative faction gets something out of this lineup. It is one that young and old, Libertarian and Independent can get behind. It takes a foreigner and a true friend to America to point out the obvious on how to fight back. As Trevor says, others could rise at any moment. But these are the ones we came up with for now. Why shouldn’t we have a Conservative Coalition? The Left does this all the time. Now is the time to organize and fight. Now is the time to throw at them the strongest leaders we have.

Remember, the American Revolution wasn’t won until the very end — almost the final battle. And it was divine intervention that won the war and freedom for this nation. Don’t you think it could happen again? We do. Help us envision the Cruz Coalition and feel free to make your own suggestions.

Update: Rick Perry has been replaced in the above list with David Vitter of Louisiana as a suggested Secretary of Transportation. Why? Because, I just heard on Tammy Bruce that Rick Perry came out vocally against Ted Cruz, saying that Obamacare should not be defunded, but fixed. You can’t fix it. This is the incorrect stance and we do not view it as Conservative in nature.

27 thoughts on “Envisioning a Cruz Coalition”