Common Core is the new push by liberal educators to create a national standard for our classrooms. Apart from the grandiose sounding platitudes, what it actually is designed to do is indoctrinate a generation of our youth into misunderstanding the history of our nation and the function of our government. And it also is redefining what our young people know about our rights. Take, for example, the following workshop instruction on our Constitution being presented by Common Core. We older folk know that the Constitution of the United States is the framework for our government. It contains the assignment of authorities between the Executive, Legislative and Judicial branches of our government known as “the separation of powers”. Our Founding Fathers were skeptical of too much power concentrated into the hands of government so they created the first ten amendments called The Bill of Rights. And the Constitution also contains the exact process which allows it to be amended in a precise manner that first involves passing the amendment by 2/3 of both Houses of Congress and then ratification by 3/4 of the State’s Legislatures. Common Core apparently wants to create a false impression in the minds of students as to what the Constitution is and what it is not so that these misinformed youth will be ignorant of the facts when they get old enough to vote.

The Daily Caller reported a story today with the ominous title:

The story originated on the web site EAG News about a school in Bryant, Arkansas that handed out a worksheet to students that contains this quote: “the government of United States is currently revisiting” the first 10 amendments to the U.S. Constitution. Because, it was reported, “the Constitution is outdated”. There is nothing in the worksheet that informs the students of the correct process to amend the Constitution making it appear that those “outdated” rights in The Bill of Rights can be taken away by a simple act of Congress or even by some tyrannical leader’s Executive Order. Here is a copy of the worksheet: 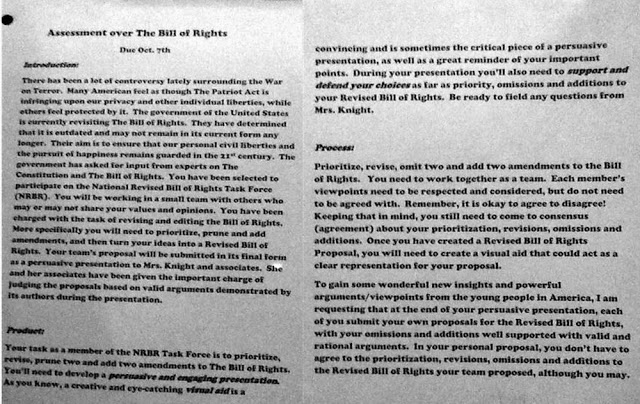 Image from EAG News – Click here for a larger image.

And a blowup with the critical statement underlined. Also, please note the misspelling and grammatical errors.

Image from EAG News – Click here for a larger image.

As Eric Owens wrote on The Daily Caller,

Well, America: if you thought the people behind the Common Core couldn’t possibly be any more moronic or tone deaf, you were wrong.

A Common Core worksheet handed out this year in a sixth-grade history class in Bryant, Ark. required students to ditch two amendments from the Bill of Rights, reports EAGnews.org. Students were also told to plug their rights eliminations by creating “a visual aid that could act as a clear representation of your proposal.”

EAGnews says the assignment is part of the Common Core State Standards Initiative, an attempt by educrats to standardize various K-12 curricula across the country. This fall, 45 states and the District of Columbia have begun implementing the curriculum.

This is from the same Democrat-controlled government that occupies itself with publishing images of Barack Hussein Obama surrounded by a halo as if he really was some messianic personification.

Our Founding Fathers must be turning over in their graves. When they formed our government they briefly debated having our country run by a King and offered the position to George Washington but the experience with the King of England convinced them to discard the idea. In their wildest dreams they could never have imagined a political party like the Democrats trying to turn the elected office of president into a deity and a country run by Executive Orders.

2 thoughts on “COMMON CORE: Prediction, Propaganda or Indoctrination. “The government of United States is currently revisiting” the first 10 amendments to the U.S. Constitution.”