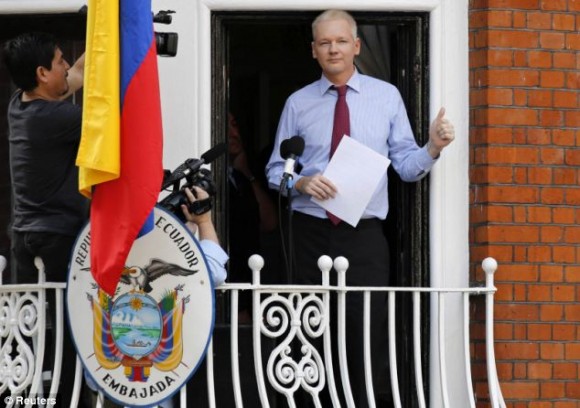 Julian Assange is bracing for a new film, The Fifth Estate, which raises the question of whether the founder of WikiLeaks is a “hero” or “traitor.” But the film, scheduled for release on October 18, has been overtaken by events. Assange, supposedly an advocate of freedom of the press, has made common cause with one of the worst violators of press freedom in the world today—Castro’s Cuba.

This alliance with Cuba proves that Assange is a traitor to the cause of freedom of the press and a free society.

Operating from within the London embassy of the Marxist government of Ecuador, where he has been living for over a year, Assange recently participated in an on-line video conference with “journalists” from Castro’s Cuba, and wore a yellow ribbon in solidarity with the “Cuban Five” who were sentenced to prison in the U.S. for spying for Castro.

Assange also used the occasion to denounce the U.S. economic embargo of Cuba as “immoral.”

The hypocrisy has caught the attention of Humberto Fontova, whose new book, The Longest Romance: The Mainstream Media and Fidel Castro, has just been released.

“According to the Paris-based ‘Reporters Without Borders,’ the Castro regime—even today—jails and tortures the most journalists per-capita on earth,” Fontova told Accuracy in Media. “Stunningly, the total number of journalists jailed by Cuba (population 11 million) is only slightly behind that of China (population 1.4 billion).

His regime jailed political prisoners than Stalin’s did during the Great Terror. Castro actually murdered more Cubans during his first three years in power than Hitler killed Germans during his first six years, and came closer than anyone in history to starting a worldwide nuclear war. During the above process, this KGB-mentored gang converted a nation with a higher per-capita income than half of Europe and a huge influx of immigrants into one that repels Haitians and boasts the highest suicide rate in the Hemisphere.”

Before Obama brought “Obamacare”—now the object of increasing controversy—to the U.S., Castro had supposedly produced “world class healthcare” for the Cuban people, a complete lie that is part of Castro’s propaganda struggle, according to the Fontova book.

Assange, in Fontova’s view, is only the latest figure to buy into the propaganda. His book examines how such luminaries as Barbara Walters, Stephen Colbert, Jon Stewart, and Barbara Walters have sold out the truth in order to make Castro (or his henchman Che Guevara) look good.

For his part, Fidel Castro had declared that Assange brought the U.S. “to its knees” through his disclosures of classified information leaked to him by former Army intelligence analyst Bradley Manning. Castro called Assange a hero for his “challenge” to “the most powerful empire ever,” adding, “Ideas can be more powerful than nuclear weapons.”

After his video conference, Assange was the subject of official stories from Castro’s “news” agencies about his online “conversation” with Cuban “journalists, journalism students and Cuban bloggers” during the event conducted by the “Press Information Center” in the Cuban capital of Havana.

Sounding like a Marxist agitator, Assange said “he believed in the right of these people to their struggle,” in answer to a question about Castro’s spies.

His praise for the Castro regime and its spies should not come as too much of a surprise. WikiLeaks has been serving the interests of America’s enemies since its inception, and has recently been acting in the role of adviser to former NSA contractor Edward Snowden, now living in Russia.

Castro has said about Snowden, who released classified information about terrorist surveillance programs, “I admire the courageous and just declarations of Snowden. In my opinion, he has rendered a service to the world, having revealed the repugnantly dishonest policy of the powerful empire that is lying and deceiving the world.”

Assange’s embrace of the Castro regime makes sense, in the context of his receiving help from the Marxist Ecuadorean regime of Rafael Correa.

“Aside from the Castro brothers, there’s nobody in the Western Hemisphere who’s trying harder to do away with freedom of the press than Assange’s putative champion, Ecuador’s rambunctiously left-wing president Rafael Correa,” writes Glenn Garvin in the Miami Herald. “In June, Correa pushed through a law establishing the crime of ‘media lynching,’ defined as the ‘dissemination of information’ with ‘the purpose of discrediting’ someone.”

Assange is staying in the Ecuadorian embassy in London because he fears British authorities will extradite him to Sweden to face sex crimes charges.

Garvin reported that Correa’s lawsuits and threats against the news media have closed many news outlets and sent other journalists “fleeing into exile,” to the point where Freedom House now lists its media as “not free.”

Assange’s embrace of the Castro regime and the “Cuban Five” raises questions about whether he has been operating as a Communist agent all along.

It would not be surprising if it turns out he was in the pay of the Cuban intelligence service.

In recent years, a number of important Cuban spy cases have come to light. They include: