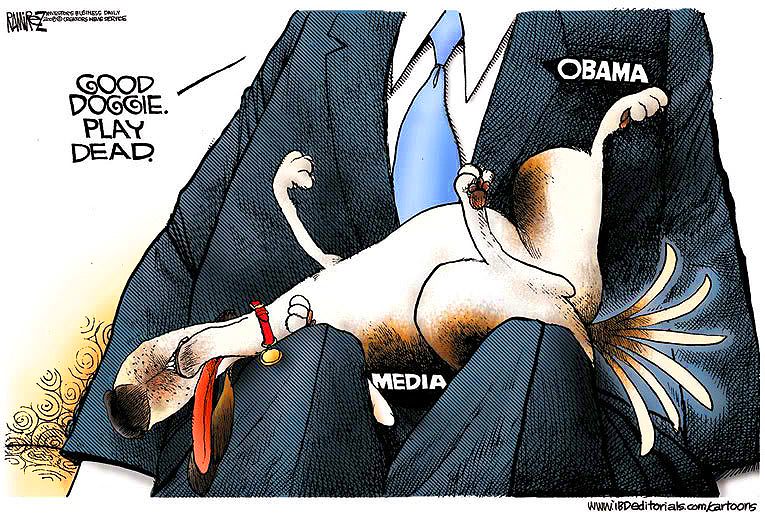 It gives a whole new meaning to “you better work, bitch.” President Obama held an off-the-record meeting with five conservative journalists yesterday – he summoned them to discuss the so-called GOP shutdown, which in reality is the Dem shutdown:

All critical of the GOP taking a stand against Obamacare and the debt ceiling. All knowingly or unwittingly media tools for Obama to wield. How appropriate the off-the-record meeting took place in the Roosevelt Room:

President Barack Obama met with a small group of conservative reporters, columnists and commentators on Tuesday for an off-the-record conversation. The private White House meeting last for 90 minutes in the Roosevelt Room, reports the Huffington Post. The chat followed an on-the-record exchange with the White House press corps about the government shutdown and imminent debt default, which lasted over an hour.

Supposedly, the meeting was to woo conservative journalists, columnists and commentators. Except, these are the same ones he met with in 2009. The same who are at times on his side – the same that are not Constitutional Conservatives by any means.

On more than one occasion, President Obama has quietly met with select members of the media. The off-the-record meetings were notable in that conservative journalists were seldom included.

On Tuesday, the tables were turned somewhat as Obama invited a small number of conservative reporters, columnists and commentators to the White House for a private chat, but is the president looking for an edge in the ongoing budget impasse with Congress?

At a minimum, the meeting would suggest that Obama is nervous about the hand he holds in his showdown with the Republican-led House. A comment made by Krauthammer after the meeting, on Fox News’ “Special Report,” is telling:

“He is really afraid of that debt ceiling. He says he won’t bend on this — of course he’ll have to at the eleventh hour. He can’t afford to be remembered as the first president who defaulted or allowed, you know, the conditions in which it can happen.”

The White House declined to comment on yesterday’s meeting.

Krauthammer is brilliant, but when he gets it wrong, he goes all the way. I don’t know whether Obama will bend or not, but my gut says he wants this all to fail one way or the other. He hates America and wants her on her knees. He doesn’t give a crap about his legacy.

Obama has met numerous times with opinion leaders, from newspaper columnists to cable news hosts, in order to get his administration’s point of view across in a private setting. The groups often include mostly liberal or moderate media figures.

In August, Obama sat down with several members of the New York Times editorial board and some of the paper’s top columnists, including conservatives David Brooks and Ross Douthat.

Obama presumably has more time than usual this week to field questions from journalists given that his planned trip to Asia was called off due to the shutdown. The Los Angeles Times reported Tuesday that the president has had to improvise his schedule, since many White House staffers are furloughed and there are fewer opportunities to hold events. As a result, Obama has provided more access than usual to the press.

You mean in between playing golf and partying he has more time to twist the arms of the media? Threaten them? Bribe them? Good to know.

Obama is pulling out all the stops. He’s moved from nudging, to shoving and soon to shooting. He’s using unprecedented force against Americans. He has always gotten to the media and masterfully diktated the truth to them – they are his Marxist lapdogs eager to follow his lead and his orders into a new envisioned Progressive futuristic fantasy land. Summoned and soon commanded to roll over and play dead. Idiots of the GOP unite.