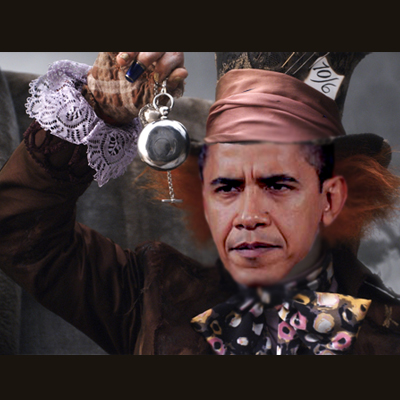 Down the rabbit hole America goes… but soon Obama the Mad Hatter will be dealing with the Tea Party. While he spouts his Marxist insanity, his media minions are in overdrive. Witness the shifting of the propagandic media from Newsweek to Bloomberg’s Businessweek. 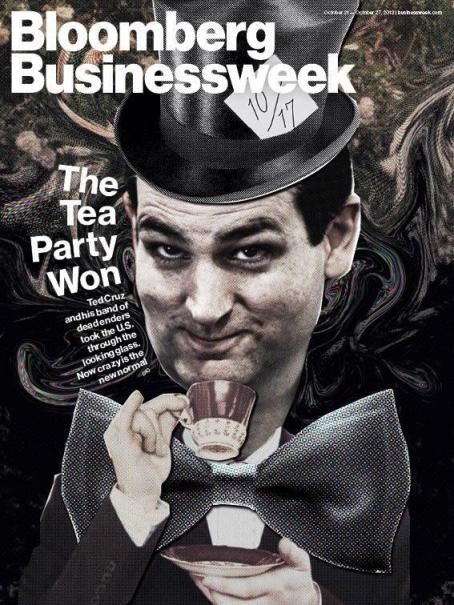 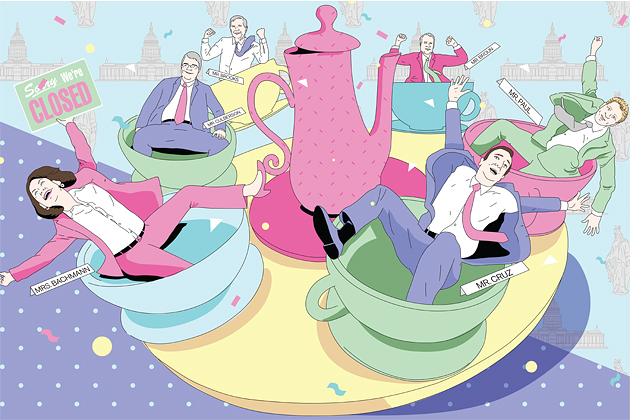 Looks like Miley Cyrus is not the only twerker on the national stage. Progressive collectivists can’t stomach restrained spending and Constitutional principles. Anything that is moral and right is anathema to them.

The Marxists are scared to death of Ted Cruz and the Tea Party — and they should be. The Tea Party is the only responsible adult in the room and they are fighting against overwhelming force from the Progressive movement. But that is what you do when shoved into the darkness; you fight in the shade. The truth is Conservatives can win this and kick the Left’s collective ass in 2014.

Between insane spending and the death spiral of Obamacare, the Liberals are committing suicide. In their warped view, they don’t care as long as their agenda is forwarded. But, they can’t hide anymore. Obamacare ripped off their mask and exposed the financial horror descending on individuals, families and businesses. Taxes and fees that make King George look like a benevolent benefactor — he would blush at the audacity of the financial oppression being levied on Americans. We rose up and revolted over far less in taxation.

In a totally predictable piece of propaganda, Businessweek portrays Ted Cruz and the Tea Party as ‘deadenders’ and crazy. It purports that we are getting our way and they state literally the virtual opposite of where things stand. They are through the looking glass:

Say this for Tea Party Republicans: They don’t back down. No apologies for triggering a partial shutdown of the federal government, then refusing to raise the debt ceiling without concessions. Condemnation rains down on them from the White House, from foreign capitals, from public opinion polls, but the Tea Party rages on.

They say they have no choice: Deficits are out of control; something must be done and soon. “Politicians have very effectively addicted Americans to government, but it’s not sustainable,” says GOP Senator Ron Johnson of Wisconsin. It’s that sense of being on the brink of disaster that feeds Tea Partiers’ determination to fight to the end. For them, the debt-ceiling deal reached by the Senate on Oct. 16 is merely a cease-fire.

But the Tea Party’s belief that things are slipping away is misplaced. Obamacare aside, events have actually gone the movement’s way ever since Republicans wrested control of the House of Representatives in the 2010 midterm elections. Discretionary spending has been falling. Federal-employee head count is down. And since 2010, deficit reduction has been more rapid than in any three-year period since the demobilization following World War II.

Lies and more damned lies. That last paragraph is pure fiction and just full of blatant falsehoods. They go on in this hateful piece of trash to take the obligatory swipe at Reagan as well. You boys really need to get a new script. The Tea Party did not win this battle thanks to Progressives on both sides of the aisle. The debt ceiling is now unlimited for the next three months. Even then the Republicans have helped the Democrats tie Congress’ hands even further on using the debt ceiling to rein Obama’s spending in. Congress is now irrelevant in stopping the Cloward and Piven march towards economic ruin. Our best hope of victory lies in a monumental electoral victory in 2014 and strong tea is brewing on that front as the Marxists get more and more heavy handed and bold and Obamacare sinks in.

While all this is happening, the Left is rewriting history to blame the Tea Party for the collapse they know is coming. Conservatives are the ONLY ones who have fought to stop this pre-planned destruction of America, but that is not how it is being painted:

That victory, however, has come at a high price. The Tea Party pushed for heavy spending cuts when the economy was weak, needlessly depressing output and keeping the unemployment rate high. The International Monetary Fund, which supports long-run deficit reduction, declared in June that the U.S. program was “excessively rapid and ill-designed.” It nearly tipped the economy into recession, says Mark Zandi, chief economist of Moody’s Analytics (MCO). The Congressional Budget Office estimated in September that waiving spending caps now would create about 800,000 jobs by the end of 2014.

What’s worse, the cuts the Tea Party achieved have come almost entirely on the discretionary side of the budget, choking everything from medical research to antipoverty programs to food inspection. Discretionary spending is the most vulnerable because it must be appropriated annually. The Tea Party, and Washington in general, have scarcely touched the real problem: entitlements such as Social Security, Medicare, and Medicaid, which are on track to soak up huge portions of the national income in coming decades. “Most economists, I dare say all economists, recognize that we have a long-run fiscal problem that needs to be addressed. But you can’t address it by cutting discretionary spending alone,” says Joel Prakken, co-founder of Macroeconomic Advisers, a St. Louis-based forecasting firm.

In political terms, the Tea Party’s scorched earth strategy has produced some impressive legislative wins but damaged the movement’s popularity. Now its blunt tactics threaten to make deficit reduction seem like a fringe issue, one of concern only to extremists. The Greek king Pyrrhus, after whom Pyrrhic victories are named, once said, “If we are victorious in one more battle with the Romans, we shall be utterly ruined.”

What revisionist claptrap. Don’t count on that you evil morons. The Tea Party is just getting started and we are coming to clean house in 2014 and kick your sorry asses out. Americans are sick to death of politicians that only serve themselves and not the people who elected them. We despise your Marxist agenda and your Liberal mentality. The Tea Party and Obama the Mad Hatter – perhaps instead of quoting Pyrrhus, Businessweek should ponder on seeing through a glass darkly and quote the Mad Hatter himself:

20 thoughts on “The Tea Party and the Mad Hatter”