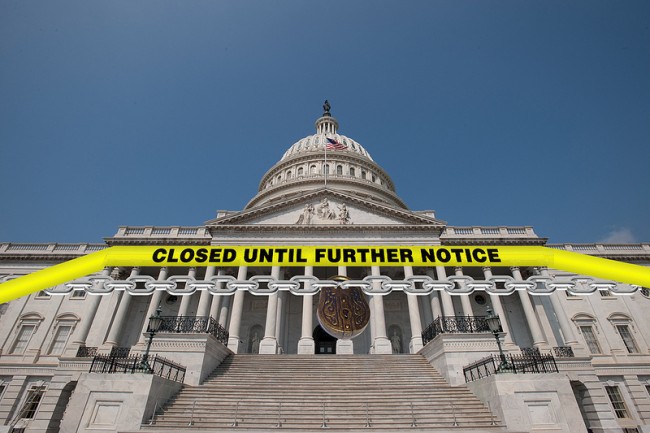 Every week on Monday morning, the Council and our invited guests weigh in at the Watcher’s Forum with short takes on a major issue of the day. This week’s question: What Lessons Can We Take Away From The Government Shutdown And Its Aftermath?

The Independent Sentinel: I learned that no matter what the government does wrong, it will be the Republican’s fault.

When Obamacare tanks, it will be the Republican’s fault for not trying hard enough to repeal it.

The Razor: There are three political factions in power in Washington. The progressive Democrats exemplified by Elizabeth “Redskin” Warren. Moderate Democrats such as Senator Harry Reid and John McCain and Nancy Pelosi and John Boehner in the House. The Tea Party as represented by Ted Cruz and Rand Paul. As Britt Hume pointed out in segment explaining why the Tea Party chose to mount this challenge against raising the debt limit, conservatives and small government libertarians have been watching the government get larger for generations under both Republican and Democratic administrations. The difference between the two seems to be on which part of the government they are going to grow more, social programs or military spending. Spice things up with a few social issues that really don’t impact most Americans much (Are you gay, black, and pregnant? Then do I have a party for you) and you have the sham of choice in a two party system.

The GOP really is an outdated concept like the term “Washington Redskins.” Let’s just drop the façade, make everyone to the left of Rand Paul Democrats, and give the team in Washington a name that is truly representative of the town: The Washington Weasels. Given how weak the NFC East is this year, I’m not sure anyone would notice.

We also learned that the citizenry exists for the federal government. If the people are unhappy with the government there is little they can do to change it but if the government is unhappy with the people, look out! The State will crush everyone in its path whether you are an elderly WW2 veteran or a stay-at-home mom organizing a Tea Party PAC. But if the people are unhappy with the government, they can vote it out can’t they? That’s another lesson we’ve learned. We’ve created a monster that exists beyond the scope of our elected representatives to control it. For example, when the intelligence establishment was unhappy with the Bush Administration, it leaked like a sieve and undermined Bush’s policy efforts. While Obama and the Democrats have aligned with the interests of the State, one doesn’t need much imagination to see it turning on them just as easily. The lesson is that this beast is uncontrollable. It can’t be starved, only fed and it demands more and more every day.

When a human being exists for a government’s pleasure, it’s called fascism. The shutdown taught us just how close to fascism we are and how little we can do about it.

The Colossus of Rhodey: I think I may have already answered it here.

Liberty’s Spirit: I had actually answered this question in a post HERE:

A President who doesn’t care about anything but his own political agenda to remake the United States into a version of the European Union complete with a Statist economic agenda. A POTUS who lives with the imperial notion that he can do no wrong and that he has a right to punish the People for their refusal to bow to his superior will.

A Democratic party that only cares about implementing the President’s socialist economic agenda, relying mostly on the practice of identity-politics in order to divide and conquer the political sphere. Disingenuous and bullying liars who consider themselves morally superior because of their political leanings.

An insipid GOP full of spineless, useless politicos who are only interested in their own powerbase to the point that they will eat their own.

The reality that the majority of capital hill know-it-alls do not care about, or honor, the US Constitution.

That We The People are basically on our own if we want to save what the foundling fathers tried to build and what we have worked hard to achieve..

By the way I also blame this turn of events on the over 3 million republicans who did not come out to vote for Romney, either because he wasn’t conservative enough or due to the fact that he was a Mormon (and don’t say there was no anti-Mormon bigotry involved, we all know better than that). They decided that they were going to teach the GOP a lesson about their power in the party. So they sacrificed the country with their temper tantrum.

The GOP establishment in turn decided to go after the Tea Party and conservatives in order to maintain their hold on the Party. Instead of standing strong and united in the face of opposition they have become petulant and infantile. Whoring before the cameras to see who can get the most airtime.

To hell with the lot of you. Don’t call. Don’t write. And you had better not ask for one freakin’ penny. I am going to take that money and put it aside so I can afford the higher medical costs for the care my family will continue to need without having to rely on the government’s permission to survive.

The Right Planet: For me, one of the biggest lessons learned is the importance of pushing back against the Obama Administration’s agenda. Although many wish to paint Sen. Ted Cruz and his stand against Obamacare as nothing but “lunacy” and “political theater,” Cruz’s strong opposition to Obamacare has forced the issue into the spotlight, which segues into the alarming national debt problem. This is where the battle needs to be fought, in my opinion–focus on the debt, and the the need for prioritizing and balancing the budget. Not too long from now, the whole budget issue will be right back in the spotlight because we keep kicking the proverbial can down the road by consistently raising the debt ceiling via continuing resolutions–stopgap measures that do nothing to address the real source of the problem: massive unconstrained federal spending.

The other lesson I’ll take away from the government shutdown is the willingness of some in the GOP–folks like Sen. John McCain, Rep. Pete King, Karl Rove, for example–to impugn and attack their own colleagues. This has infuriated many in the base, including myself. Apparently the Republican Establishment is an exclusive country club after all. It’s amazing to watch the progressive leaders of the GOP’s circular firing squad go after their own with fangs out, spitting venom, but refuse to direct such vitriol and invective at the administration or the Democrats.

The Glittering Eye: That’s a complicated question, one you could write a book about rather than giving a quick answer suitable for including in the Forum. I’ll limit myself to the political implications.

I think that the entire process, outcome included, has resulted in a hardening of positions. The “Tea Party” Republicans are probably less willing to give ground than they had been previously (which wasn’t much). And the Congressional Democrats and the president, flushed with victory, probably believe they’ll be able to crack the Republicans whenever they care to. No bridges have been built. There has been no positioning for future agreements.

I think pretty much the opposite may be the case. I suspect that even the Republicans who voted to end the shutdown and lift the debt ceiling might feel that they’ve been put into an unwanted position and will be less likely to go along next time around. Which is only in a few months.

Whenever something bad happens, some bozo will call it a learning experience. I’ve had a lot of learning experiences, ask my mom. But with the shutdown it’s true, for example, I learned that 93 percent of the workers at the Environmental Protection Agency are non-essential. Now I didn’t major in math, but I’m pretty sure that’s more than nine out of ten.

Of the 16,000, roughly 1,000 are essential making the EPA about as necessary as shoulder pads on a snake or another hangover sequel, or Vermont. And so we learn the difference between essential and non- essential in government. A non-essential employee is what you get when a citizen foots the bill and the government doesn’t care. We are the wallets, they are the spoiled brats.

In a private business, a non-essential employee would be a non- employee. He or she would be home eating funyons, which are delicious, in their undies scratching the luck he would like Andy Dick.

A non-essential employee is what you get when you feed cash into a bloated bureaucracy, without ever designating its necessity. So those EPA jobs are there simply because they can be but also to ensure the survival of a ravenous bureaucracy.

It’s a lot like the movie “The Blob,” but without the happy ending.