Today folks, let’s look at the human nature part of being an armed country, where there are armed citizens, civility and good manners practiced and it gives both criminals and politicians pause and thoughts for their actions. Then the flip side… look at the failures of gun free zones and the rise of robbery, rape, murder and general nastiness among the teenagers and vagrants alike in these cities. I am against any kind of government gun control period. All your questions on gun control can be answered by reading the Constitution’s Second Amendment and we should take a second look at our policies on gun rights concerning certain factions of non-violent felons. Not all felons deserve a permanent revocation of there gun ownership rights, because one size does not fit all.

AN ARMED SOCIETY IS A POLITE SOCIETY – GEORGE WASHINGTON

A gun is an inanimate object and tool that you are in full control of and that’s as far as my gun control beliefs go. But you show a gun to a liberal control freak and they have these fantasies of a gun coming to life and reloading itself; cutting up millions of people with its little 30 round magazine. They treat guns like they are a supernatural object of evil. But yet, as practical experience has shown, guns in the hands of responsible citizens have SAVED and even HELPED more people than they have harmed. Guns are a tool of freedom around the world and in your community. Guns are the tools of liberty against corrupt governments throughout history and the Founders knew this.

“JUST BECAUSE ONE OWNS A FIREARM IN THEIR HOME, DOESN’T MEAN THEY OWN VIOLENCE IN THEIR HEART.” – GERALD LOEFFERS

The rise of the entitlement fueled, rude and crude class is directly related to the gun free zone laws in places like Chicago, Washington D.C., Detroit, California and New York City. These are the same places that also have high rates of violent crime, random shootings and gang banger activity. They are also experiencing a rise in kidnappings and home invasions from illegal immigrants that our esteemed leaders from both parties have ignored in order to get their votes. The simplest thing that all radical gun haters ignore is that all the school and base shootings were done by people who knew that these places had no one armed and they could conduct their misdeeds in a free fire zone with no opposition. The other thing I have noticed is what’s going on in gun free zone cities with the increase in police state mentality and the over militarized conversion of traditional community minded patrol cops and the over use of SWAT teams against unarmed guys with for instance, a single spent shell casing and one damn box of ammo. This has also led to whole police divisions hiring wannabe thugs and mental midgets who have no Constitutional knowledge and who have thrived on random abuse of their authority over the very citizens they swore to protect.

TO BE ARMED IS TO SERVE

Let’s look at an average town with common sense gun laws — Coeur d’Alene, Idaho. This town has gun laws that are practical. They have the right to carry concealed or open carry. They can buy arms privately without paperwork. You can, with the right ATF paperwork, buy machine guns, suppressors and SBR weapons. And, oh look… we don’t even have a serous wannabe gang problem. This town has one of lowest violent crime rates out there. Unlike Spokane, WA which is next door, where there are shootings every week, some police corruption and you also have to watch them because an Islamic Community Center just opened up over there. The home robbery rate is low and the few wannabes we do get once in a while don’t last long when they find out we shoot back, lol. I do believe that when you are armed as a good citizen, you intend to help others in a responsible fashion. This is what the Founders talked about over many years. Well, hell… you never know. One day you might be saving a policeman’s life, just as one day a couple of months ago, a regular armed citizen helped out a local sheriff and saved his life with his gun. An armed society also is a good defense against a corrupt police force. Remember… they are human and can fall into greed like everyone else, just like a corrupt government. 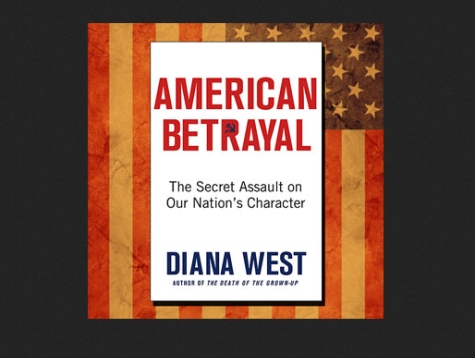 Purchase at Amazon.com: American Betrayal: The Secret Assault on Our Nation’s Character

Make sure you read:

I have long admired Diana West. She is a patriot, tenacious, thorough and incredibly intelligent. Her latest book American Betrayal is my second favorite this year, coming in just behind Trevor Loudon’s The Enemies Within: Communists, Socialists and Progressives in the U.S. Congress. But, I’m biased… full disclosure — I helped research and edit the book. 😉

As someone who has researched communists and Progressives for years, I find Diana’s book to be truthful, factual and right on the mark. Frankly, it is a breath of fresh air and those attacking her work either do not know what they are talking about or have another agenda. We have been fighting a war with these Marxists in the US for one hundred years or better. They have infiltrated virtually every office of power, our educational institutions, the media and anywhere they can get a foothold. Behind much of this is Russia and China. The Cold War never ended, it simply shifted.

West’s book is a thoroughly researched, heavily footnoted work that unveils the approach to the Soviet Union by President Franklin Roosevelt and his associates. During this era, the infiltration by communists and Soviet agents was particularly heavy and aggressive. Their insinuation into our halls of power was aided and abetted by politicians that went out of their way to appease Russia, just as they are doing today with Islam.

Diana is not just attacked by the Left and the Marxists, there are many on the Right going after her… calling her a conspiracy theorist and a nut. How very Alinsky of them. Nothing could be further from the truth. Roosevelt was no paragon of virtue and I have been attacked for writing on him in the past. Facts are facts – Roosevelt was a Progressive plain and simple. West’s other crime was speaking kindly of Joe McCarthy. She is right once again. The only thing I will say on McCarthy is that he did not finish what he started. It’s like cockroaches – we did not get all the communists and now they have multiplied many times over. They’ve basically conducted a coup from within our government and are destroying our economy, our military, our very way of life, while coddling our enemies and assisting them in their evil strategies.

Washington DC and US politics has long been riddled with Marxists. They are the ultimate occupiers.

Stanton Evans did a fantastic review of Diana’s book. Far better than I ever could. Here is a taste (then go read the whole thing):

It is for instance abundantly plain, from multiple sources of Cold War intel, that Communist/pro-Soviet penetration of the government under FDR was massive, numbering in the many hundreds. These pro-Red incursions started in the New Deal era of the 1930s, then accelerated in the war years when the Soviets were our allies and safeguards against Communist infiltration were all but nonexistent. The scope of the problem was expressed as follows in an FBI report to Director J. Edgar Hoover:

“It has become increasingly clear… that there are a tremendous number of persons employed in the United States government who are Communists and who strive daily to advance the cause of Communism and destroy the foundations of this government. Today nearly every department or agency is infiltrated with them in varying degree.. To aggravate the situation, they appear to have concentrated most heavily in departments which make policy, or carry it into effect…”

Pro-Red penetration was especially heavy in such war-time agencies as the Office of Strategic Services and Office of War Information, which were thrown together in a hurry at the outset of the conflict, with little thought for anti-Communist security vetting. But the problem was acute also in old-line agencies such as the State and Treasury departments, both of which by war’s end were honeycombed with Soviet agents.( Making matters worse, anti-Soviet officials and diplomats were in the meantime being purged from their positions.)

As you can see, Diana’s research mirrors a lot of what we have been researching on KeyWiki.org and there is much more on these agencies and individuals in Trevor Loudon’s books.

American Betrayal is a must read. It will open your eyes and allow you to see what has happened in this country as never before. You will begin to understand how we got to where we are today, not only inclusive of communist infiltration and a Progressive/Marxist agenda, but the attempted invasion by Islam that is occurring everywhere you look. The enemies within here in the US might as well be Russian operatives. We are simply lousy in our agencies with spies from Russia and China and nary a word is said on this. Background checks? That’s for white Christians. Everyone else… come on in! Not only are they endangering our way of life, these Marxists are compromising our security and our position as a world power.

Read American Betrayal… it is real history and completely removes the politically correct makeup slap-dashed on Progressive leaders. The enemies within have indeed betrayed America. Simply one of my all time favorite books.