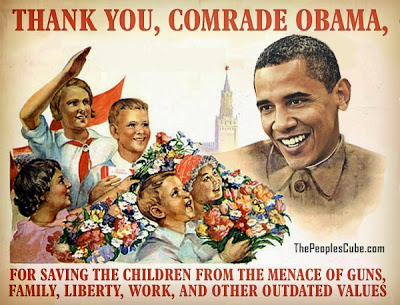 Are you a conservative, a libertarian, a Christian or a gun owner? Are you opposed to abortion, globalism, Communism, illegal immigration, the United Nations or the New World Order? Do you believe in conspiracy theories, do you believe that we are living in the “end times” or do you ever visit alternative news websites (such as this one)?

If you answered yes to any of those questions, you are a “potential terrorist” according to official U.S. government documents.

At one time, the term “terrorist” was used very narrowly. The government applied that label to people like Osama bin Laden and other Islamic jihadists. But now the Obama administration is removing all references to Islam from terror training materials, and instead the term “terrorist” is being applied to large groups of American citizens.

And if you are a “terrorist”, that means that you have no rights and the government can treat you just like it treats the terrorists that are being held at Guantanamo Bay. So if you belong to a group of people that is now being referred to as “potential terrorists”, please don’t take it as a joke. The first step to persecuting any group of people is to demonize them. And right now large groups of peaceful, law-abiding citizens are being ruthlessly demonized.

Below is a list of 72 types of Americans that are considered to be “extremists” and “potential terrorists” in official U.S. government documents. To see the original source document for each point, just click on the link. As you can see, this list covers most of the country…

1. Those that talk about “individual liberties”

2. Those that advocate for states’ rights

3. Those that want “to make the world a better place”

4. “The colonists who sought to free themselves from British rule”

7. Anyone that holds a “political ideology that considers the state to be unnecessary, harmful,or undesirable”

8. Anyone that possesses an “intolerance toward other religions”

9. Those that “take action to fight against the exploitation of the environment and/or animals”

14. “Opposition to equal rights for gays and lesbians”

15. Members of the Family Research Council

16. Members of the American Family Association

17. Those that believe that Mexico, Canada and the United States “are secretly planning to merge into a European Union-like entity that will be known as the ‘North American Union’”

19. Members of the Federation for American Immigration Reform

20. Members of the Tennessee Freedom Coalition

21. Members of the Christian Action Network

22. Anyone that is “opposed to the New World Order”

23. Anyone that is engaged in “conspiracy theorizing”

25. Anyone that is concerned about FEMA camps

26. Anyone that “fears impending gun control or weapons confiscations”

29. Those that “don’t think they should have to pay taxes”

30. Anyone that “complains about bias”

31. Anyone that “believes in government conspiracies to the point of paranoia”

32. Anyone that “is frustrated with mainstream ideologies”

33. Anyone that “visits extremist websites/blogs”

34. Anyone that “establishes website/blog to display extremist views”

35. Anyone that “attends rallies for extremist causes”

36. Anyone that “exhibits extreme religious intolerance”

37. Anyone that “is personally connected with a grievance”

38. Anyone that “suddenly acquires weapons”

39. Anyone that “organizes protests inspired by extremist ideology”

42. Citizens that have “bumper stickers” that are patriotic or anti-U.N.

44. Those that are “fiercely nationalistic (as opposed to universal and international in orientation)”

46. Those that are “suspicious of centralized federal authority”

47. Those that are “reverent of individual liberty”

48. Those that “believe in conspiracy theories”

49. Those that have “a belief that one’s personal and/or national ‘way of life’ is under attack”

50. Those that possess “a belief in the need to be prepared for an attack either by participating in paramilitary preparations and training or survivalism”

51. Those that would “impose strict religious tenets or laws on society (fundamentalists)”

52. Those that would “insert religion into the political sphere”

53. Anyone that would “seek to politicize religion”

54. Those that have “supported political movements for autonomy”

55. Anyone that is “anti-abortion”

56. Anyone that is “anti-Catholic”

60. Those concerned about “illegal immigration”

61. Those that “believe in the right to bear arms”

62. Anyone that is engaged in “ammunition stockpiling”

63. Anyone that exhibits “fear of Communist regimes”

65. Those that are against illegal immigration

66. Those that talk about “the New World Order” in a “derogatory” manner

67. Those that have a negative view of the United Nations

68. Those that are opposed “to the collection of federal income taxes”

70. Those that display the Gadsden Flag (“Don’t Tread On Me”)

71. Those that believe in “end times” prophecies

The groups of people in the list above are considered “problems” that need to be dealt with. In some of the documents referenced above, members of the military are specifically warned not to have anything to do with such groups.

We are moving into a very dangerous time in American history. You can now be considered a “potential terrorist” just because of your religious or political beliefs. Free speech is becoming a thing of the past, and we are rapidly becoming an Orwellian society that is the exact opposite of what our founding fathers intended.

Please pray for the United States of America. We definitely need it.

10 thoughts on “HELLO! Meet the 72 Types Of Americans That Are Considered “Potential Terrorists” by the Obama Administration”