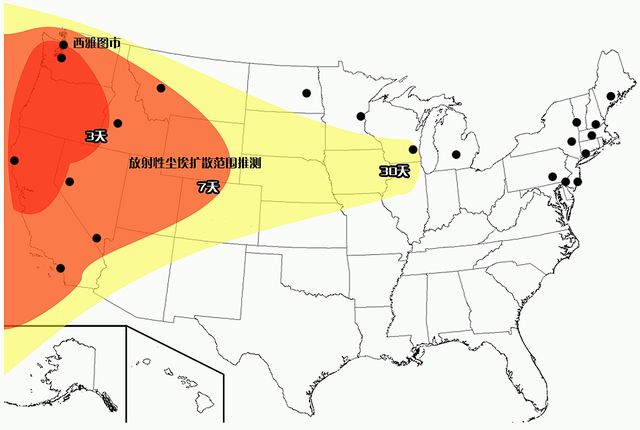 For years, Trevor Loudon and I have been warning of the looming threat from China and Russia. We have been called crazy, ridiculed, maligned and ignored. If you ever needed proof that we were right and that America better get her military ducks in order, this is it. I will say it again… the Cold War never ended — it shifted. This week, Chinese state-run media for the first time showed exactly how Beijing’s nuclear submarines could attack American cities (see the map above) as a means to counterbalance U.S. nuclear deterrence in the Pacific. This is a bold and blatant threat. If we get in the way, China will nuke us and they mean it.

In the 50’s and 60’s, this threat by China would have put the U.S. on war footing. Now, we hear crickets not only from our military leaders, but the media and our political leadership. From The Washington Times:

“This is the first time in 42 years since the establishment of our navy’s strategic submarine force that we reveal on such a large scale the secrets of our first-generation underwater nuclear force,” the Global Times said in a lengthy article titled “China for the First Time Possesses Effective Underwater Nuclear Deterrence against the United States.”

The article features 30 photos and graphics detailing, among other things, damage projections for Seattle and Los Angeles after being hit by Chinese nuclear warheads and the deadly radiation that would spread all the way to Chicago. 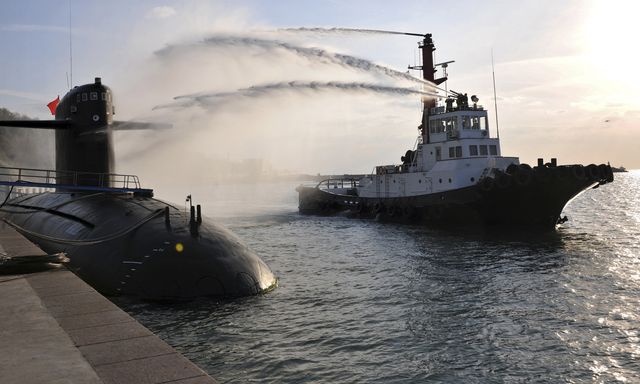 In this photo taken on Oct. 26, 2010, and released by the Chinese Navy on Sunday, Oct. 27, 2013, a Chinese navy nuclear submarine takes part in a nuclear safety drill at the Qingdao submarine base in east China’s Shandong province. In a sign of growing confidence, China’s navy gave Chinese media on Sunday unprecedented publicity on its first nuclear submarine fleet, one of its most secretive military programs. China is devoting increasing resources to its naval forces to safeguard its maritime interests and assert its territorial claims. (AP Photo)

The Chinese sub-fleet is reportedly the world’s second-largest, with approximately 70 vessels. I contend they are the largest, but in the end that is splitting radioactive hairs. About 10 of the vessels are nuclear-powered and four or more are nuclear ballistic submarines that can launch missiles. Our intel is so crappy on China though, I suspect it is much, much worse than this. And this is only the Navy. They have killer satellite systems that can take out communications and strike militarily in the blink of an eye. They have so many soldiers, that losing 100s of thousands is a drop in the military bucket. After all, they are fighting for their homeland and dominance and they hate the barbaric West, so they are willing to lose millions if need be in their quest for conquest and supremacy.

If I have not sufficiently chilled you to the bone, I apologize. The Chinese are not bluffing:

Chinese calculations for nuclear attacks on the U.S. are chillingly macabre.

“Because the Midwest states of the U.S. are sparsely populated, in order to increase the lethality, [our] nuclear attacks should mainly target the key cities on the West Coast of the United States, such as Seattle, Los Angeles, San Francisco and San Diego,” the Global Times said.

“The 12 JL-2 nuclear warheads carried by one single Type 094 SSBN can kill and wound 5 million to 12 million Americans,” the Global Times reported.

China also has developed land-based intercontinental ballistic missiles — notably the DF-31A, which has a range of 7,000 to 7,500 miles.

“If we launch our DF 31A ICBMs over the North Pole, we can easily destroy a whole list of metropolises on the East Coast and the New England region of the U.S., including Annapolis, Philadelphia, New York, Boston, Portland, Baltimore and Norfolk, whose population accounts for about one-eighth of America’s total residents,” the Global Times said.

All the state-run press reports stressed the point that the PLA’s missile submarines are now on routine strategic patrol, “which means that China for the first time has acquired the strategic deterrence and second strike capability against the United States.”

“Our JL-2 SLBMs have become the fourth type of Chinese nuclear missiles that threaten the continental United States, after our DF-31A, DF-5A and DF-5B ICBMs,” said the Global Times.

Now, I want you to throw into the mix, the threat of EMPs. If it were me, I would launch those first and take out as much as I could that way to clear the path so to speak. Consider the fact that most of our electronics are manufactured by China. They claim to have embedded in our electronics ‘kill switches’ that can be triggered to cause failures and chaos. They also claim that they have back doors into our utility, communications, financial, military and Internet systems. You begin to see the trouble we are in and how negligent our military and leaders have also been.

But wait… there’s more. A surveillance ship from China was spotted in Hawaiian waters for the first time. It is being described as an unprecedented move and as a provocative retaliation to the U.S. naval presence in the East China Sea. The ship is a 4,000 ton People’s Liberation Army electronic reconnaissance ship and was recently spotted near Hawaii within the U.S. 200-nautical mile EEZ (Exclusive Economic Zone). It is a spy ship and it got within 2400 miles of San Francisco.

Why all this, you might ask. Well, it is a message to the U.S. to let China do as she pleases or she will crush us. And Russia is right there with China. This is what you get when you gut your military and have a weak kneed President. From InfoWars:

China’s increasing aggressiveness in the East China Sea and its challenge to Japanese control of the Senkaku Islands has sparked tensions, with Japan repeatedly scrambling fighter jets earlier this week in response to Chinese military aircraft flying near Okinawa.

Back in September, China also reportedly sent warships to the coast of Syria to “observe” the actions of US and Russian vessels in the region.

“The recent deployment of a PLAN surveillance ship into Hawaiian waters is seen as Beijing’s message to the US and the rest of the world that China can now contest the waters of the western Pacific and that the US Navy no longer has a free pass in the region. It is also seen as a form of retaliation for what Beijing considers the provocative naval exercises the US recently conducted in the Yellow Sea jointly with the navies of South Korea and Japan’s Self-Defense Force,” states the report.

Did anyone really believe that our enemies wouldn’t seize an opportunity to put America in her place? We have entered a Cold War Redux and China’s nuclear counterbalance is a terrifying warning shot off our bow. World War III is bearing down on America and our President is sacrificing us on a global Marxist altar. America needs to wake up and not be a lamb to the slaughter. If we fall, the rest of the free world will fall and a horrific darkness will descend on the U.S. Somebody better wake up the military and let them know we are being threatened by enemies who do not make idle threats and always, always keep their promises.