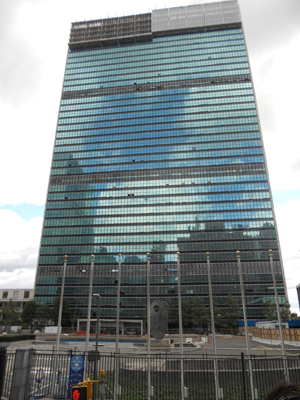 The old discredited incarnation of the Council – the United Nations Human Rights Commission was discredited because states with appalling human rights records were members. On 15 March 2006 the BBC reported on its website:

“The existing body has been heavily criticised for having countries with poor human rights records as members…. UN Secretary General Kofi Annan welcomed what he called an “historic resolution… that gives the United Nations a much-needed chance to make a new beginning in its work for human rights around the world”.”[2]

One word change to the name and six fewer members is does not demonstrate a renewed commitment to human rights. So what happened? The lyrics of Won’t Get Fooled Again by The Who come to mind:

Nice repackaging but so much for the “new beginning”!

Back in 2007 Jackson Diehl writing in The Washington Post made the following astute observations relating to the newly constituted Human Rights Council:

“If the first year of the United Nations Human Rights Council is any indication, it’s grown sick and cynical — partly because of the fecklessness and flexible morality of some of the very governments and groups that claim to be most committed to democratic values….

The European Union includes countries holding eight of the council’s 47 seats. It has made no serious effort to focus the council’s attention on the world’s worst human rights violators.”[4]

The attitude of nominally democratic states comes as no surprise to the International Civil Liberties Alliance (ICLA). We have for many years been highlighting human rights abuses by such countries in our interventions at Organisation for Security and Cooperation in Europe (OSCE) Human Dimension meetings. With regard to the European Union (EU), we must point out that it is not a democratic organisation – executive power is held by the unelected European Commission and the European Parliament is little more than a rubber stamping body. Indeed the EU repeatedly highlights its profoundly anti-democratic credentials by its own actions – actions too numerous to go into here! The actions of EU member states such as the United Kingdom also indicate contempt for the principles of the UDHR. It could be argued the UK’s status as an observing member of the OIC[5], its decision to sign a memorandum of understanding with the OIC in September 2012[6], and its attendance at the OIC meeting in Cairo in February 2013[7] together represent an endorsement of the OIC’s view of human rights that formalised by the CDHRI. This may suggest that the United Kingdom itself is not really committed to the United Nation’s definition of human rights and that in the future it may be willing to concede that human rights are indeed subordinate to the Islamic sharia! Perhaps this all explains why Saudi Arabia’s membership of the Human Rights Council is countenanced by countries who claim to support human rights.

Terry Sanderson of the UK’s National Secular Society reminds us of the OIC’s desire to destroy one of the most fundamental components of human rights, the right to freedom of expression:

“The blasphemy law which is being proposed by the OIC on behalf of its members would be an entirely dangerous and regressive step if it were to be approved at the UN. It is quite clear that it would be used to persecute and oppress non-Muslim minorities in Muslim-majority countries, as the domestic blasphemy law in Pakistan does at present.”[8]

An article on the website of The Economist by B.C., that carries the rather appropriate phrase Theatre of the Absurd in its title, does not seem to hold out much hope for the UN’s ability to be a champion of human rights:

“Given that more governments (including some Western ones) violate human rights than respect them, I’m not sure that global, inter-governmental bodies in this field can serve any purpose. It may still be useful for groups of governments (like the Council of Europe) to band together to agree to observe certain standards. But for an organisation to work credibly for human rights at a global level, with no geopolitical or cultural bias, it needs to be as independent as possible from all govermments [sic], and hence from all violators.”[9]

The willingness of Western states to endorse the OIC, their lack of willingness to oppose human rights violators influencing policy at the UN, and their own deteriorating human rights records at home all suggest that human rights are now in serious danger across the board. It is therefore unlikely that the UN will be capable of getting its own house in order any time soon. The UN itself seems incapable of following and supporting its own principles; indeed by not acting to actively oppose alternatives to the UDHR it is undermining is own reason for being. In some ways this inability or unwillingness to act is similar to that experienced by the old League of Nations which failed to stop the rise of the illiberal movements that were eroding human rights in the 1930s. History does appear to be repeating itself in our institutions of collective security!

Currently the UNHRC is not about human rights, it is a forum for states to conspire to undermine them! The UN should act and act as a matter of extreme urgency to regain legitimacy in the field of human rights. The BBC stated in that article that we referred to earlier:

“There will be periodic reviews of membership, and any state accused of systematic human rights violations could be suspended.”[10]

(1) ICLA calls for the urgent dismissal of Saudi Arabia from the United Nations Human Rights Council on the grounds that it is guilty of systematic human rights abuses.

(2) It also calls upon the United Nations to reaffirm its commitment to the universal nature of human rights as defined in the Universal Declaration of Human Rights (1948) by repudiating all alternatives to it such as the Cairo Declaration on Human Rights in Islam (CDHRI) (1990).

Only then can confidence be restored in the United Nations’ declared commitment to human rights.

[9] Human and religious rights at the UN: Theatre of the absurd, B.C., 12 November 2013, Economist.com, http://www.economist.com/blogs/erasmus/2013/11/human-and-religious-rights-un