The issue for us is that it is not yet the right time:

What we are doing is laying the ground work that will ultimately make sovereignty possible. This is an essential stage in a process. You cannot go “poof” and get people on board for sovereignty. You first must convince them that Israel has a RIGHT to the land. (We do, but few realize it.)

Unfortunately, during the last 20 years since Oslo, the PLO has done a fantastic job of convincing the world (and regrettably, some left wing Israelis) that the Palestinian Arabs have a right to everything past the Green Line (the 1949 Armistice line). At the same time, Israeli governments have been deficient in presenting the case for Israel’s rights. At most, there is talk about security, which is not the same thing.

The 90 page Levy Report attests to Israel’s legal rights in Judea and Samaria. It is based on solid research, and relies on the historical record, the fact of the ancient Jewish presence in the land, and, most significantly, legal documents. The Levy Report is the vehicle for presenting the case for Israeli rights in Judea and Samaria. We are not occupiers; the settlements are not illegal; our situation is unique (sui generis), and the Geneva Conventions do not apply. We intend to use this to change the paradigm of thinking: a critically important and necessary process.

Thus, please understand, if you do learn about the sovereignty campaign, that it is no way associated with the Levy Report Campaign.

And then… a point of much pride in Israel. The Philippines has endured a horrendous typhoon in which more than 3,600 people have died (the estimated number keeps rising) and close to two million have been displaced.

And what did Israel do? We sent help, immediately. Not just in the form of supplies — bringing in some 100 tons of medical and humanitarian supplies, but also medical personnel – establishing a field hospital to treat 1,500 patients per day.

No sooner was the IDF medical field hospital set up, then a woman in labor came for help. The father, grateful for the assistance of IDF gynecologists, named his healthy new born son “Israel.” 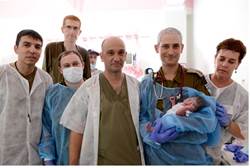 See this and share it: “NBC’s Dr. Nancy Snyderman ‘in awe’ of IDF Medics in Philippines.”
“The IDF had selected Bogo, a small village on the northern island of Mactan, to establish its emergency response center. Bogo had been hard hit by the devastation but it hadn’t attracted as much attention as other towns. It was definitely off the beaten path…

“As we walked up to the tent where incoming patients were being processed, I immediately saw the electronic medical records technology that I had first seen in Haiti [where the IDF also operated]. Each patient’s medical record is created using a photograph to ensure accurate identification. This is especially important in these types of crisis situations. Language barriers, loss of documentation and the fact that patients have arrived from all over would result in a nightmare if the patients weren’t properly identified.

“Smart. Sophisticated. Secure. This was what I had experienced with the IDF before. But now I was impressed with something else: the place they had selected. This wasn’t a site where trauma surgeons were needed — those injuries in other towns were being addressed. What the people of Bogo needed was good, solid medical care. They were already living in poverty when the typhoon decimated their fragile infrastructure.

“I asked the IDF Surgeon General in charge why they chose Bogo. He said it was because they were poor and their needs were great. As I left, I walked away in awe of this group of doctors: physician humanitarians, and medicine at its very best.” (Emphasis added)

We can hold our heads very high indeed.

While I haven’t been writing daily, I have been monitoring the news. And what I have been seeing has had me speechless because of the audacity and the duplicity of the leaders of the Obama administration. Actually, I’m not speechless – it’s just that what I have to say about that administration transcends what I permit myself in a professionally written post.

Hopefully all of you have been paying attention, as well.

In brief, Obama and Kerry are SO eager to sign with Iran, on any terms, that they are doing everything possible to discredit Israel. “Don’t believe Israel,” Kerry told Republican senators last week, with regard to ratcheting up the sanctions.

But these senators are not only inclined to pay attention to what Israel is saying, they reported on the pathetic nature of the “briefing” offered by Kerry and his team:
“‘I was supposed to disbelieve everything the Israelis had just told me, and I think the Israelis probably have a pretty good intelligence service,’ [Senator Mark] Kirk told BuzzFeed [a news website].

“A Senate aide familiar with the meeting told the website that ‘every time anybody would say anything about what would the Israelis say they’d get cut off and Kerry would say, “You have to ignore what they’re telling you, stop listening to the Israelis on this.”‘

“‘They [Kerry’s team] had no details,’ the aide told BuzzFeed. ‘They had no ability to verify anything, to describe anything, to answer basic questions.'”

Kerry also indicated to the senators that increasing sanctions might have the result of destroying the talks.

That’s the giveaway, folks (as if we didn’t have a hundred other giveaways): Iran is calling the shots, and the US administration is running scared that if it is too tough, they might not be able to sign.

But I think my favorite is this, from Obama, at a recent press conference: An American strike against Iran, he explained, might cause Iran to “pursue even more vigorously” nuclear development in the future.

Naftali Bennett, head of Habayit Hayehudi and Minister of Trade, was sent by the prime minister last week to lobby Congress with regard to toughening the sanctions. 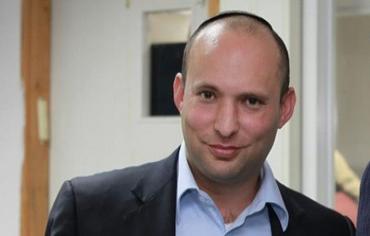 This puts into context Kerry’s exhortation to Republicans senators not to listen to Israel. Bennett, who is a new face in Washington and speaks a perfect American English, did an effective job. The response, he said, was “very positive.”

The issue of increased sanctions is due to come before the Senate soon – possibly this week.

Here in Israel, French President Francois Hollande is visiting, and the energy between the two leaders is reported to be warm. 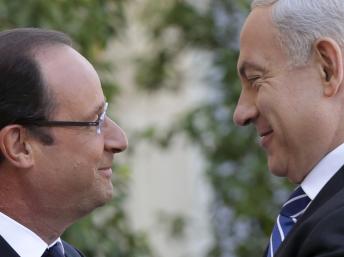 With regard to Iran, matters are going exceedingly well, with a great deal of agreement in principle.

“You said when you came out that the experience of the Holocaust places a very special responsibility on all of us. Francois, I want to tell you the burden it places on me. It is my duty to prevent anyone who credibly threatens to execute another Holocaust against the Jewish people. This is my obligation but our common obligation for mankind and our common future as well.”

Israel, said the prime minister, will not be bound by a “bad agreement” with Iran, and when it says “never again,” it means it.

Netanyahu said that France has stood up “for what is right, and I appreciate that.”

Hollande, who tonight addressed the Knesset, gave Netanyahu what he was seeking yesterday: Indication that he would continue the pressure on Iran until Tehran surrendered its nuclear weapons. He called Iran “a threat to Israel, to the region, and to the whole world.”

In his address tonight, he vowed to defend Israeli interests against the Iranian threat.

France has the capacity, if it holds firm, to make a deal with Iran impossible at this juncture.

As to business ties, the visit is promising as well: Hollande came with a huge delegation of business leaders seeing to strengthen economic relations with Israel. This is all to the good.

As to Hollande’s position on our negotiations with the Palestinian Arabs, that is a different matter. He did meet with Abbas, and in the Knesset called for a two-state solution with Jerusalem as a shared capital.

I sigh at this, and call it unfortunate. (I will deal with Palestinian Arab issues in more detail soon.)

Yet my sense of this visit, none the less, is positive. Much that is to Israel’s benefit is likely to accrue from it. In the Knesset, Hollande expressed the desire “to salute the entire Jewish people, whose genealogy is entwined with the history of the whole of humanity…I come to say in Israel, in the name of France: The friendship between us is firm, more than the passing leaders who come and go, and even more than ups and downs of international life.”

Let me end with what is most important. It circles around to my tag line for the day:

Yesterday, Ya’akov Amidror, recently retired national security adviser and a man I consider to be straightforward more than not, gave an interview to the Financial Times. Such an interview would not have been given without official sanction, and we should take note.

Israel, he said, is capable of halting Iran’s nuclear capacity “for a very long time.” The air force has conducted “very long-range flights…all around the world” in preparation.

“…We are not bluffing. We are very serious – preparing for the possibility that Israel will have to defend itself by itself.” (Emphasis added – source is the JPost link above)

This is a warning to the world about what we may be prepared to do imminently. But I think it is also a warning to Iran. Israel — is this not incredible? — is the only nation in the world that Iran fears. Because we are serious and mean what we say. That fear might inhibit Iran, just a bit.

When asked about what Israel would do if Hezbollah retaliated after an attack on Iran by firing missiles and rockets, Amidror said the government would be prepared to “use ground forces to go into the urban centers and to deal with the people who are launching the rockets, and to destroy the rockets and the launchers.”

Do not imagine that he is kidding here, either.

Truth Revolt: Dem Senator: ‘We All Knew’ Obama Was Lying

“Rob Maness provides conservatives with a refreshing change from typical senatorial candidates,” said Drew Ryun of the Madison Project. “As a career Air Force officer who fought in combat for our country, constitutional principles are more than just a talking point. With a dearth of courage within the ranks of the Senate GOP Conference, Maness would bring his leadership skills to a group of elitists who know nothing but capitulation and surrender on first principles. His energy and unapologetic Louisianan conservative values are a bold contrast to Landrieu and make him the best candidate to win back this seat for Republicans. We are proud to support Colonel Rob Maness.”

The official endorsement can be viewed here.

Our full report on Sen. Mary Landrieu’s record of supporting big government can be viewed at LandrieutheLiberal.com.