Blackout: NBC Censors All Coverage of ObamaCare for Days

Cross-Posted from our friend, Rhymes With Right

Note from NoisyRoom to Harry Reid: get stuffed. I know your family and have utter contempt for you, you corrupt asshat. You want a fight? Comin’ right at ya. 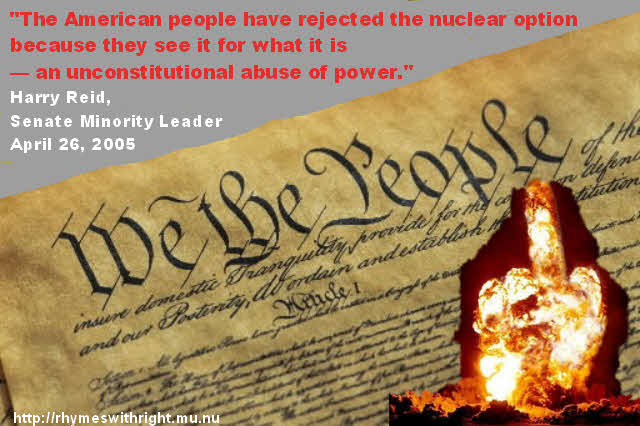 Here’s what Senate Minority Leader Harry Reid had to say about the nuclear option back when Democrats were in the minority and sought to keep President George W. Bush’s incredibly well-qualified judicial nominees off the bench by use of the filibuster.

“The American people have rejected the nuclear option because they see it for what it is — an unconstitutional abuse of power.”
Harry Reid, Senate Minority Leader, April 26, 2005

Well, here’s what Senate Majority Leader Harry Reid did today in the face of Republicans using the same tactic to keep Barack Obama’s highly ideological nominees off the bench — despite bipartisan opposition to the move.

The Senate voted Thursday to change its rules to prevent the minority party from filibustering any nominations other than nods to the Supreme Court.

The change was approved after Senate Majority Leader Harry Reid (D-Nev.) triggered the “nuclear option,” which allows a change to Senate rules by majority vote.

The 52-48 vote dramatically changes the rules of the Senate and limits the minority party’s ability to prevent confirmation of presidential nominees. Sens. Carl Levin (Mich.), Mark Pryor (Ark.) and Joe Manchin (W.Va.) were the only Democrats to vote against Reid’s rules change.

In other words, Harry Reid and his minions decided to follow the lead of Barack Obama in doing to the Constitution what Martin Bashir suggested should be done to Sarah Palin.

The die is cast — and there will be consequences in the future.

I’m looking forward to the GOP getting the Senate back — and even more to the advent of the next GOP president. Democrats will get NOTHING after this move — not a crumb. And their precedent will be extended to Supreme Court nominees the moment that the Democrats even hint at a filibuster of a Republican nominee for the High Court.

All because the Democrat President and Democrat Majority Leader and a majority of Senate Democrats decided to take a path that they declared to be “an unconstitutional abuse of power” just a few short years ago.

Now that they — and Barack Obama — have declared this move to be perfectly constitutional and completely acceptable, there is no obstacle to putting Democrats on the receiving end of such filibuster limitations.

For my Democrat friends, I have some cheery words for you.

And you just made it possible.