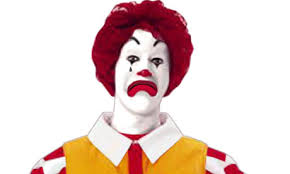 Marxist food workers of the US unite! Correct me if I’m wrong here, but when I was a kid, fast-food jobs were viewed as jobs for teenagers or beginners’ jobs. It is a testament to just how bad the economy under Obama is that these are now considered not only career moves, but worth fighting, dying and being fired for. My how things have changed.

In an effort to strong-arm McDonald’s, Wendy’s and other fast-food restaurants into fixing pay rates to begin at a minimum of $15 an hour, Marxist groups and unions are sponsoring a series of one day strikes in 100 cities starting on Thursday and there will be additional protest activities in 100 other cities as well. Charleston, SC; Pittsburgh, PA; and Providence, RI among many, many others will have these clowns demanding their fair share or else:

The protests have expanded greatly since November 2012, when 200 fast-food workers engaged in a one-day strike at more than 20 restaurants in New York City, the first such walkout in the history of the nation’s fast-food industry.

“There’s been pretty huge growth in one year,” said Kendall Fells, one of the movement’s main organizers. “People understand that a one-day strike is not going to get them there. They understand that this needs to continue to grow.”

The movement, which includes the groups Fast Food Forward and Fight for 15, is part of a growing union-backed effort by low-paid workers — including many Walmart workers and workers for federal contractors — that seeks to focus attention on what the groups say are inadequate wages.

The fast-food effort is backed by the Service Employees International Union and is also demanding that restaurants allow workers to unionize without the threat of retaliation.

Communists and unions always do this folks. They hate capitalism and adore regulation. If they could, unionization would be forced on all of us and in fact, nationalization of fast-food chains would become a reality. The truth of the matter is that setting the minimum wage at $15 an hour would drive most of these businesses out of business and the unemployed and welfare numbers would soar even more. The economic depression in the US would deepen and the Administration’s Cloward and Piven strategy would move forward unfettered. I understand that these jobs don’t pay enough to live on – they weren’t meant to. The solution is to find a job that does pay enough or go into business for yourself. Either way, work your butt off and be the very best out there that you can be. As an added suggestion, we could of course pay our debts and manufacture at home. You know, work at bringing costs down in the market, while increasing the standard of living. Oh, and you could do away with the IRS and oppressive taxation. There’s the cure for what ails the underpaid right there.

The first fast-food strikes took place on Aug. 29th in more than 50 cities. Now, they are ratcheting up the numbers of protestors and the places where the protests are held with the support of unions, communists, Marxists, Leftists and Obama. Joining the fray will be numerous community, faith and student’s groups. Among these Leftist groups will be USAction and United Students Against Sweatshops, which is based in the Philippines. USAction is a network organization that creates the nation’s leading progressive coalitions, making democracy work by organizing issue and election campaigns to improve people’s lives. It is an Obama political tool, supported and funded by George Soros I am sure. As for United Students Against Sweatshops, tell me again how fast-food jobs equate with sweatshops? Fast-food jobs for the most part are not hazardous, long hours are typically not a problem (especially with Obamacare coming into force) and no one is being chained to a deep fat fryer. I don’t see the abuse here – I see the market at work and it should be left alone.

This is fast-food Marxism supersized. It is a blatant attempt to force Marxism on American businesses by communists while claiming they are for the poor, underpaid workers. Same old, same old communist manipulation.