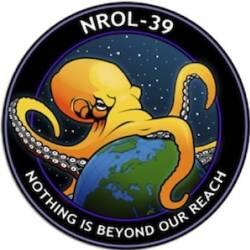 Seriously? Having created an uber tense surveillance climate, the U.S. National Reconnaissance Office decided this was the perfect time to unveil their new logo of the squid who spied on me. It’s a monster octopus with tentacles that encircle the globe. I share Doug Ross’ sentiments… I’m all for a strong U.S. intelligence capability, as long as it is not used against Americans. But after the whole NSA kerfluffle (which by the way, is ridiculous since everyone is spying on everyone else and then screaming over the US doing it), this is a giant ‘F’-you moment to the world. Boy, talk about poking the Russian bear and the Chinese dragon – you might as well flash neon saying: “Please attack me.” You know, like the sign on Biden’s back that he sports during his foreign policy comedy tour.

Sometimes, The Register approaches Godhood in their prose:

The NRO are totally embracing their menacing Big Brother persona and putting it out there for world+dog to see, having launched a bunch of satellites and a mysterious payload on a spacecraft yesterday – complete with the logo of a creepy octopus sucking the life out of our world.

The Office of the Director of National Intelligence (DNI) tweeted pictures of an Atlas 5 rocket bearing the NROL-39 getting ready for launch yesterday, which it said was carrying a “classified NRO payload” along with some cubesats.

The NRO is the agency in charge of designing, building, launching and maintaining America’s spy satellites. The DNI said that its latest rocket would carry a dozen mini satellites co-funded by NASA as well as its unknown primary payload.

The DNI did not say just why the NRO thought that a good logo for its spy-craft would be a hugely evil-looking octopus with its tentacles wrapped around the Earth and the inscription “Nothing is beyond our reach”. 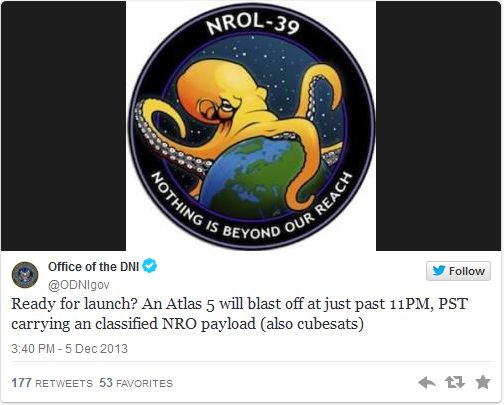 Thursday’s launch was the second time an Atlas 5 rocket has lifted off from the West Coast this year. Hmmm… Wonder what is in that payload? Nothing good, I would imagine. Looks like the surveillance state is not lacking for funding and is reaching out to touch everyone. Look out boys, your evil intentions are showing. You are taking the ‘Intelligence’ out of ‘Intelligence Agency.’

The U.S. National Reconnaissance Office launched a new spy satellite Thursday evening on mission NROL-39 — and the new logo and tagline are quite an eye opener.

The new logo features a giant, world-dominating octopus, its sucker-covered tentacles encircling the planet while it looks on with determination, a steely glint in its enormous eye. The logo carries a five-word tagline: “Nothing is beyond our reach.”

Christopher Soghoian, principal technologist and senior policy analyst with the ACLU, raised a quizzical eyebrow at the new slogan.

“Advice to @ODNIgov: You may want to downplay the massive dragnet spying thing right now. This logo isn’t helping,” he wrote.

An agency spokeswoman told Forbes that there’s a very good reason for the symbol: The octopus is intelligent, and therefore a good emblem for an intelligence agency.

“NROL-39 is represented by the octopus, a versatile, adaptable, and highly intelligent creature. Emblematically, enemies of the United States can be reached no matter where they choose to hide,” said Karen Furgerson, a spokeswoman for the NRO. “‘Nothing is beyond our reach’ defines this mission and the value it brings to our nation and the warfighters it supports, who serve valiantly all over the globe, protecting our nation.”

The NROL-39 mission was classified, as are nearly all missions and satellites launched by the secretive NRO. It was carried aloft by a United Launch Alliance rocket from the Vandenberg Air Force Base in California at 11:13 p.m. PST, according to NASAspaceflight.com. Because the launch trajectory matched that used by other launches, it was likely carrying a third satellite for the agency’s radar reconnaissance fleet, the site said.

Along with its secretive payload, the rocket also carried the Government Experimental Multi-Satellite (GEMSat) payload, which contained 12 “nanosatellites” that will perform a variety of science missions.

The NRO mission is to design, build, launch, and maintain America’s intelligence satellites.

Twice in one week, I’ve had to agree with the commies at the ACLU. This is getting surreal. Depicting a weakened America as a sea monster that has the planet in her 8-armed embrace is laughable. They’ve turned us into a cartoon character with just about as much menace. Seriously, who isn’t afraid of the Russian bear waiting to tear you apart? Or the Chinese dragon that could burn you to ashes while eviscerating you? We get an octopus? It’s like getting Obama instead of Reagan. It’s a joke. Next, really cool makeup for the military and snappy uniforms – oh, wait… 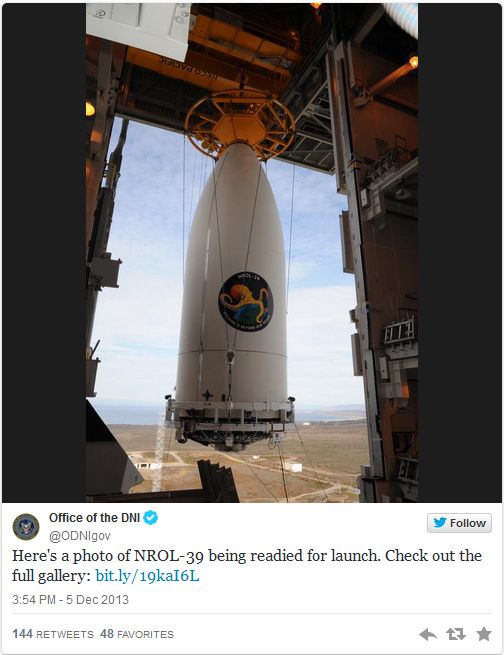 Deaf, insensitive and invasive… yep, nothing is beyond Obama’s reach.

3 thoughts on “NROL – Nothing Is Beyond Our Reach”